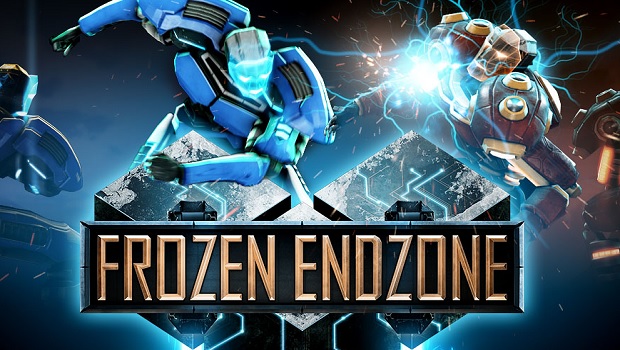 Indie studio Mode 7 is best known for Frozen Synapse, a tactical turn-based game that charges players with commanding a small group of troops in battle. The game was the core of an eponymous Humble Indie Bundle, and even won PC Gamer’s Strategy Game of the Year back in 2011. Mode 7 hopes to replicate that success by moving their tactical approach to gameplay from the battlefield to a futuristic football field. Their upcoming title Frozen Endzone launched on Steam Early Access today, but my early Early Access gave me a chance to check it out over the weekend.

Before I go on, I’m going to make an admission that might get me labeled as positively un-American by some: I don’t like football. I’ll come by for the food if invited to a Superbowl party, but a few seconds of action followed by ten minutes of deliberation just isn’t my idea of a sport. For that reason, I wasn’t sure that I would like Frozen Endzone; although writer/composer Paul Taylor says that he considers the doesn’t consider the title a football game but instead “more like a weird future sport inspired by football”, the inspiration is hard to miss.

In Frozen Endzone, you take charge of a team of futuristic robotic athletes. Your goal is to grab the ball and move it to the endzone by running and passing it between teammates. The opposing team can block your players from running and intercept your passes if you aren’t careful. Sound familiar?

But despite the football overtones, Frozen Endzone is truly a spiritual successor to Frozen Synapse. In addition to the opposing team, there are stationary obstacles on the field that restrict the paths available for you to run and pass. As Taylor explains in his AMA earlier today, “[Programmer and designer Ian Hardingham] definitely wanted to make the game a bit more about the terrain and
slightly less about pinpoint accuracy.”

He continues, “Also I’d say we tried to make it a bit less turtly and defensive – in Endzone you can win with a bold aggressive move and that’s pretty satisfying.” The result is a game that demands just as much tactical finesse as its predecessor, if not more. You and your opponent each plan out your teams’ movements, and the turns are resolved simultaneously when you’re both ready. You can preview how your strategy might play out, but there’s no way to know for sure until it’s actually executed.

You can, however, order the enemy players around in the planning stage. They won’t actually listen to you when it comes time to play of course, but it gives you chance to test your plans against any enemy tactic you can imagine. As in any sport, the team with the most points at the end of the game is declared the winner. You have 18 turns to score as many points as possible by moving the ball to the enzone and, optionally, passing through designated bonus zones on the way.

Even at this early stage in development, playing against the AI is a surprisingly engrossing experience and the hints of clever commentary keeps it fun. I enjoyed the game even without touching the online multiplayer, and I imagine Frozen Endzone will only get better as the full suite of features are implemented.

According to the title’s website, the full version will include:

In the meantime, the Early Access version launches on Steam today and a purchase will net you a bonus copy for a friend.

I came away from my time with Frozen Endzone surprised by how much I liked the game, but maybe I shouldn’t have been. As Taylor explained to another gamer, even if you don’t like football, “you should like Endzone; it’s really an evolution of the [Frozen Synapse] concept which puts a different spin on things.”