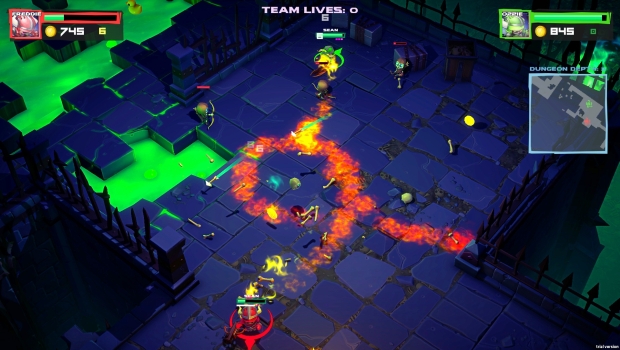 One of my favorite parts of any co-op game is finding ways to impede, hinder, or mess with the people I’m supposed to be working with. It should be no surprise, then, that I love a game that allows you to pick people up and toss them off the side of the level. Defenestration is just a part of Super Dungeon Bros., though, and in my time with the co-op dungeon crawler at E3 I had just as much fun slicing through hordes of baddies as I did tossing my teammates off overlooks.

Most puzzles require teamwork, usually with a platform and switch.

A co-op, top-down brawler for four friends, Super Dungeon Bros. is a multiplayer game at heart. I could instantly tell within my first five minutes that it was meant to be played on a couch, with friends. Each player chooses a bro and their weapon, and while the character choice is purely cosmetic, the weapon selection is anything but superficial.

There’s a wide variety of weapons available, each with their own abilities and stats. I picked the hammer, which predictably mashed things into the floor pretty efficiently. My other bros chose options like crossbows and lances, rounding out our lineup, but each person could fight effectively on their own.

Plenty of obstacles lie in wait in the dungeon too.

Cooperation was most important in two areas: puzzle-solving and boss-fighting. Bros can pick each other up and toss them, damaging enemies where the thrown bro lands and covering a fair amount of distance in the process. Most puzzles involved bros throwing bros, crossing wide gaps and holding switches down for other bros to cross dangerous obstacles like pits and poison.

As for the boss fights, we took on a massive ghoul whose head was just out of reach. To get up there, my other bros and I had to toss each other up onto an upper deck of the boss arena and mash on his skull, while the other bros down below fought off the boss’ personal army of minions.

The action can get pretty frantic.

It’s a really fun game, full of cooperation and spontaneous moments of craziness. Little options, like being able to toss both bros and enemies, as well as moments like teaming up and accidentally turning into a spinning bro-nado of doom because you were trying to make a bro-totem, are emergent and exciting, and keep the gameplay fresh. Super Dungeon Bros. is certainly a game for friends, however, as most of the game’s mechanics and levels revolve around cooperating bros and would be a little dull by yourself.

While the demo we got to check out was only two levels long, each area in the final build will consist of five levels followed by a boss. There will be a ton of variety in weapons and enemies, and options for online co-op for those in need of extra bros. We’ll keep you up-to-date as this dungeon-crawling bro-fest nears release later this year.