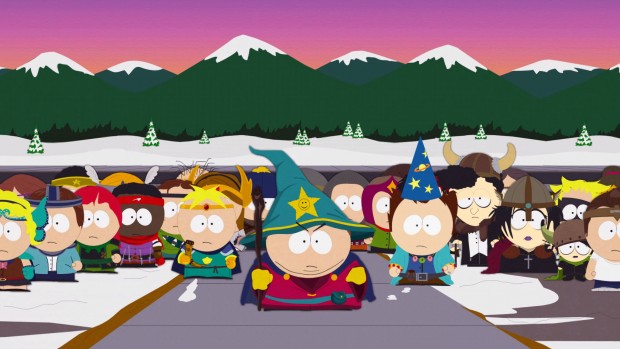 South Park: The Stick of Truth is shaping up to be one hell of a great game.  By working closely with Matt Stone and Trey Parker, Obsidian Entertainment has created something that will literally make you crap your pants from laughter.  Although there still isn’t an official release date (hinted at a holiday release), the game is looking very refined and will be the next big thing for South Park since the 1999 feature film.

In case you’ve been in the dark, here’s a quick recap of the story.  As “The New Kid” who just moved in down the street, you explore the town of South Park in search of the elusive “Stick of Truth” in true LARPing style.  Caught in the middle of two warring factions — the “Humans,” lead by Cartman, or the “Elves,” led by Kyle — you’re on an epic quest to save the town and become friends with our favorite gang of four.  During the gameplay demo, The New Kid is searching the war torn halls of the elementary school with Butters in search of the Stick of Truth after siding with Cartman’s faction.  The Stick is supposedly being stored in one of the classroom desks on the other side of campus.

From what we’ve seen, the game has a great balance between strategy and timing, much like that of Paper Mario — just with farts, vibrators and projectile crap.  While you explore the school, there are many “Elven-built” barriers that require a bit of puzzle solving with the use of either special items or powers.  Your character has the ability to direct a palmed fart at torches or exposed gas lines in out-of-reach areas, causing an explosion and allowing you to progress forward.  There’s also the ability to shrink down in size and shoot spit wads to reach inaccessible areas and knock out posted guards.  The environment is interactive as well, where you can kick over trashcans and fart on things to receive loot.  In the boy’s bathroom you can actually take a dump in the urinal and save it for later as a high-powered single use attack against foes.

I have to say that there is something special about watching kids beat the shit out of each other and swear like drunken sailors. The voice work is top notch and really sells the fact that this game is set in the South Park universe.  Visually, the game is everything one could ask for and doesn’t hold back in any aspect of the art style or sound design.  It truly is a charming game that holds true to the spirit of South Park and old-school RPGs alike.  I’m excited to see the final product and can’t wait to see what the next chapter in South Park has in store for us. Stay tuned.