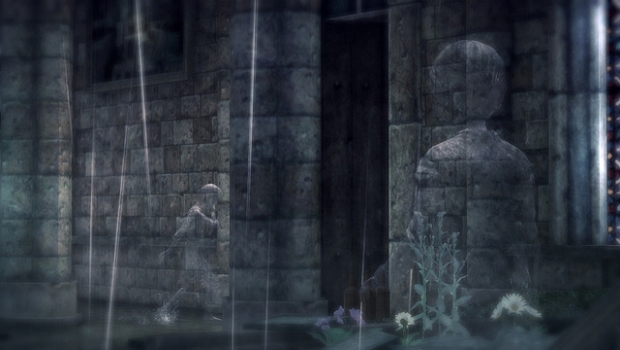 Back at gamescom 2012 we saw something interesting, but only for a moment.  Like the subject matter, it appeared only for a short video demo and then faded like its namesake. rain (yes, it’s lower case) was introduced as a dark stealth game – a sort of twisted hide-and-seek.  Born as a stealth title, the game has morphed into something unique and compelling.  While we wait for the October release date for the PSN-exclusive from PlayStation C.A.M.P., Acquire, and SCE Japan, we’ve got a brief look at the first few levels of the game.  Much like the recently-released Puppeteer, this game is different, and once again, different is good.

The game opens with a boy gazing out of his window, seeing the silhouette of a girl being pursued by the shadow of some horrible monster.  Leaping from his window to help her, he found that he too had become invisible, only able to be seen when rain falls on them.  Chasing the mysterious girl, he now had to find out why he had become invisible, who these monsters are, and why they are pursuing her.

The game doesn’t provide more than the setup above, nor does it need to.  Your objective is clear, and the only reason they need to give more direction than that is a brief bit of info on how to climb things.  Everything beyond this seems to be left to your imagination, making this game into something I didn’t expect – a puzzle.

The first level focuses heavily on teaching you a specific skill; rain management.  The creatures that chase you can kill you instantly, so it’s imperative that you use distractions and guile to lure them away from you and then dash from safe overhangs to dry alcoves.  This persists in level two, but it introduces how mud can make your feet (and footprints) visible, and it is capped off in a creepy abandoned factory in level three where moving cover, distraction, and more expand the concept even further.

SCE Japan, PlayStation C.A.M.P. and Acquire are working hard to give us not only a game, but to also make an experience.  Like ICO and Shadow of the Colossus, they are trying to build something that will stick with you long after the credits fade.  Enjoy a little bit of video of the game in motion (and some of its fantastic music!), and look for our continued coverage as we approach the October 1st release date.