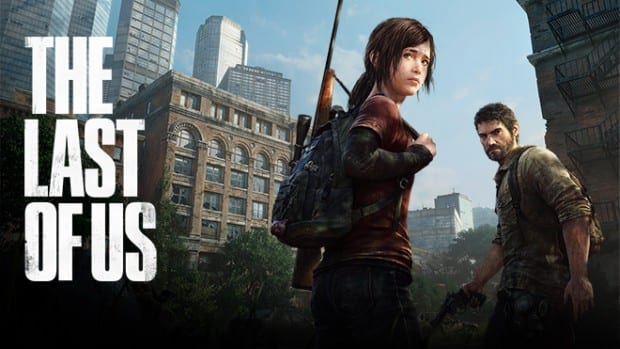 There were two big showstoppers at E3 2012 that had everyone buzzing after the Sony Press Brief – BEYOND: Two Souls and The Last of Us. BEYOND was pretty to look at, but The Last of Us looked like the culmination of all previous Naughty Dog work in one tightly-wrapped new IP.  Equal parts action adventure title like Uncharted and a smooth blend of survival horror, the game looked absolutely amazing.  The E3 demo focused on a ruined Pittsburgh, but we didn’t get a lot of detail on how things got so bad.  Through a fantastic opportunity…I was able to get those details and take it for a spin at an exclusive hands-on event.  Neal Druckman (Creative Director) and Bruce Straley (Director) from Naughty Dog were like two proud parents as they presented The Last of Us to us – having played a good slice of it myself, they have every reason to be.

[singlepic id=10483 w=320 h=240 float=left]The Last of Us focuses on the story of Joel and Ellie.  We saw them battling scavengers and hunters in the overgrown results of a fungal pandemic, but this time around we got to see the real threat – the Infected.  Our demonstration takes place much earlier in the game.  Joel and his smuggler sidekick Tess have been contracted to pick up Ellie and deliver her to a group called The Fireflies.  Joel and Tess provide black market goods (ration cards, drugs, weapons, etc.) so they make a good team to get Ellie out of town.   The 14-year old Ellie was born in Boston 14 years ago, 6 years after the spread of the pandemic, and she’s never had any connection to the outside world.  Boston has become one of the few infection-free zones, but martial law has turned it into a highly oppressive place with curfews, ration cards, and military executions for lawbreakers.  How bad has the world become to make people want to live in such an environment?  It was time to find out.

Our demo picks up in the outskirts of the military zone.  The Air Force bombed this downtown area almost out of existence to try to stem the tide of the infected.  It worked for a short while, but mysteriously the Infected repopulated in force.  Ellie had never stepped outside of the military zone, so her bravado and brash attitude coupled with her wonderment over buildings she’d only see in the distance is tempered by the reality of just how dire her situation really is.  The fact that she doesn’t know whether to trust Tess or Joel just compounds her problems. The level has us trying to make our way to the capitol building for the drop off for Ellie.  Unfortunately that isn’t a straight shot with the military’s bombing of the area to try to kill the infected.  That bombing was an abject failure as there is still plenty of infected around the area, but it will force us into, through, around, and under the remains of buildings.  Making our way through a bombed out office building shows off some of the stealth elements in the game.

Similar to previous Naughty Dog games, stealth is entirely optional, but with ammo in limited amounts, it has a very prominent place.  The AI is robust and dynamic, taking this title up a notch from being just a shooter to proper survival horror.  Given the 20 years of raiding, ammunition is very scarce leaving the player with scavenging as the only viable option.  To that end, Naughty Dog has put an entire crafting system in the game.  Split into battery, blade, binding, rags, alcohol, explosives, sugar, and melee weapons, the crafting system allows players to take simple objects and turn them into deadly implements.  A broken board when combined with a binding and a pair of scissors quickly turns an otherwise dangerous stick into a weapon capable of killing in a single blow.  Beyond the combination of weapons, you can also pick up bricks, bottles, pipes, and other environmental castoffs that can be lethal on their own.  When your weapons run dry (or they break – there is a durability component for weapons) you can use your fists in the most dire of situations.  There are firearms in the world, and they are most often lethal (location-based damage is very important here – aim for the head!) given how much noise they make they can either turn the tide of a fight or attract an overwhelming number of enemies.  How and when you use firearms becomes tactical very quickly.  You’ll need everything you can find — the Infected are beyond dangerous.[singlepic id=10478 w=320 h=240 float=right]

The scariest things in games are the ones that exist in our world.  In this case, the Infected were directly inspired by the BBC Documentary Planet Earth.  The team watched a species of fungus infect ants and take control of their minds.  Driving them to a heavily populated area, the ants (now with spores growing out of their heads!) would explode infecting the rest of the hive en masse (It’s called Ophiocordyceps Unilateralis – look it up if you’d like to be horrified).  What if something like this could spread to humans?  The implications are frightening.

The first stage of infection are colloquially referred to as “Runners”.  These creatures still have a sense of humanity and know what they are doing, but cannot stop themselves.  Working in packs, they still have rudimentary sight and hearing, but aren’t too much stronger than a normal human.  At Stage two the infection starts growing out of the eye sockets, blinding the infected. It’s a fate worse than death as they are still alive and suffering.   By stage three they become “Clickers”.  The Clickers are fully blind, the fungus hardening to create a flower-like armor on their heads.  Using echolocation like a bat, if they detect any sort of movement they immediately set upon you, killing you almost instantly.  With Clickers, stealth and distractions are paramount to your very survival.  To help you survive against such a vicious enemy, Joel has something called “Listen Mode”.  This mode lets you navigate in dark spaces and listen for the infected.  It turns the world black and white and lets you see enemy movements through walls with little ripples showing how much sound they are making.  Using throwables as distractions combined with this vision mode makes for a very tactical experience.

[singlepic id=10472 w=320 h=240 float=left]The best way I can describe the tactical components of the game is a section in the demo that has us trying to make our way through a ruined subway station.  Picking up a noisy shotgun, we sneak up behind a Clicker and use a shiv to take him out quietly.  Thankfully the Infected don’t key in on our light source, giving us opportunity to choke out a few of the Runners in the area to maintain our stealth.   Unfortunately we’ve made a little too much noise and our situation quickly turns sideways, forcing us to engage an enemy with three brick slams to the head.  Pulling a molotov we built earlier (pretty easy recipe – rag, bottle, alcohol) we managed to firebomb two enemies at once before they had a chance to react.  As we hastily combine a 2×4 with a pair of scissors we have to quickly engage a runner with our shotgun as he had wandered into our hiding place.  Rushing a final enemy with the 2×4, we dig the scissors into its skull to open up a path up a ladder to end the demo.    All of these elements combine beautifully – it never felt clunky to switch from quiet to loud or from sneaking to gunning down enemies.

When I want to show off what the PlayStation 3 is capable of doing I’d put in any game from the Uncharted series.  As beautiful as those games are, the team at Naughty Dog has improved on the engine even more.  Since this world has experienced 20 years of neglect and there is no power, the team focused heavily on the lighting engine.  Ambient light sources dynamically bend around the environment giving an extremely realistic look.  The flashlights that Joel and Tess carry morph around objects and you can see the distortion of the bulb in the projected light.  Similarly, the greenery that has engulfed the world climbs realistically up and around every surface.  The verticality of the bombed out city of Boston is amazing, and the vines that are in the process of engulfing the once proud city speaks to an incredible attention to detail in both the wide-open spaces as well as the confined areas like the aforementioned subway.[singlepic id=10475 w=320 h=240 float=right]

The Last of Us seems to be a very “show, don’t tell” approach to character development.  Even over the short 30-40 minute demonstration we see a lot of emotional context and growth.  Tess is a bit of a badass in the beginning but when we encounter the Clickers her demeanor shifts slightly from a very confident “We need to do this,” to a reserved and slightly frightened “We have to do this…”  These subtle shifts coupled with the beautiful landscape and the impressive AI is shaping this game to be a genre-defining title.  Many games claim to be a character-driven experience, but very few actually achieve it.   The game is set for a May 7th release date, and based on what I’ve seen so far, you should be very, very excited. 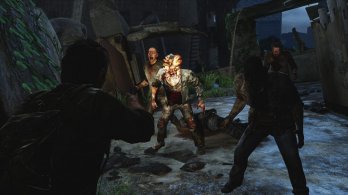 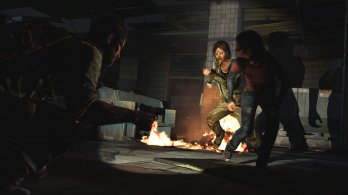 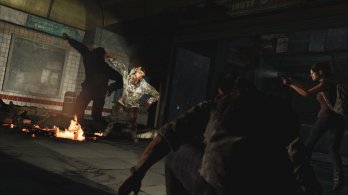 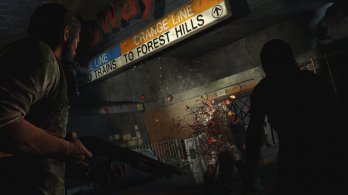 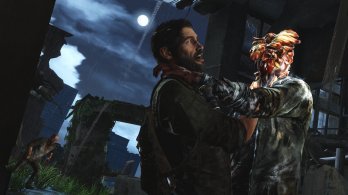 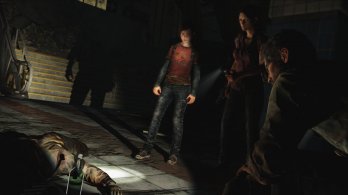 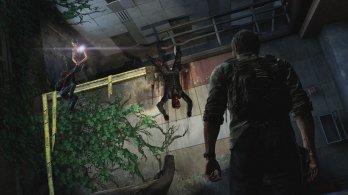 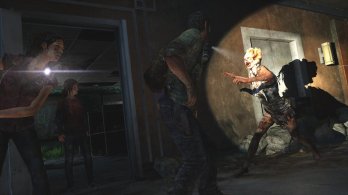 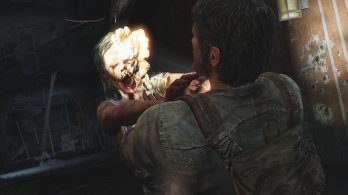 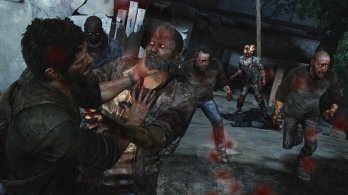 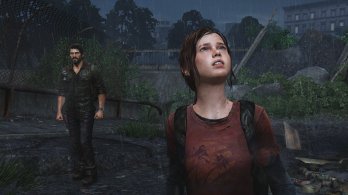 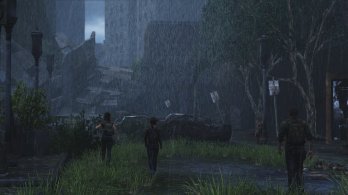 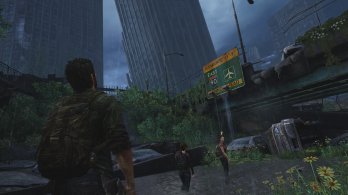 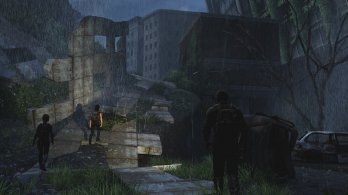 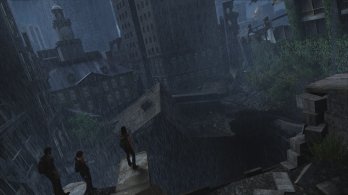 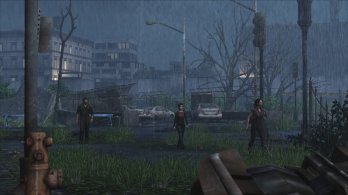