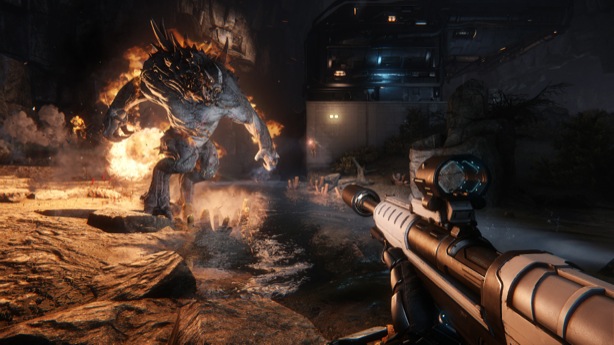 As an Xbox One user, I got quite a bit of time to play Evolve’s Alpha. I played as each class, and as the monster quite a bit.

Cooperation is key when playing as a hunter, unlike most multiplayer games, and sadly this was not the strong suit of many of the people I was grouped up with. For this reason, I ended up dying most of the time I played as a hunter. The good news is that losing was still incredibly fun, even when I was getting ruthlessly stomped on by a twenty foot-tall monster. The difficulty of working together as a hunter is repaid though, once you finally topple the beast, which I only managed to do once. The hunter roles seem like they’d be better-suited for people who know one another, which I’ll definitely have to arrange when the Beta arrives in 2015.

Playing as the monster is just awesome, and definitely is my preferred role in the game. I’ve always been the lone wolf type, and there’s no better feeling than stalking a team of players before dividing and conquering. As a monster you’ll feel extremely powerful up until the point where you find a group of hunters that can work together, which in my case seemed to reverse the tables entirely and made me feel like the one being hunted. If you like causing mayhem without having to coordinate with others, this role is right for you.

The great thing about Evolve is that it’s incredibly well-balanced, and it’s clear that Turtle Rock has taken a lot of care in ensuring competitiveness. That said, at the current experience level each game I played was one-sided either with the monster dominating throughout, or the hunters quickly putting down the monster early on in the match. Hopefully as people gain experience there will be more photo finish moments.

I first got my hands on Evolve back at PAX East. During that demo, I played as the monster and had a blast ravaging the land in a variety of ways until eventually overtaking the opposing four players. The evolving mechanics felt new and picking apart the four attackers was a blast. At the time, that demo made me very exciting to get more hands on time with Evolve. Unfortunately, the Evolve Alpha seems to be doing the exact opposite.

The biggest issues experienced within the Evolve Alpha came when playing one of the four squad members. There seems to be a pretty big lack of instruction on how to properly play your class, leading to a multitude of players just running around in circles wondering what the hell they are doing. Cooperative play is key in taking down the monster, meaning communication is typically something you have to partake in. A lot of people like to play online games with no headset, doing so in Evolve seems to punish you. While the mechanics are frustrating to get used to, it still feels fantastic when your team does come together and bring down the big bad villain.

The window was short, and I managed to sneak a few matches in before the alpha finished. I played both the monster (Goliath) as well as the Assault class with my time in Evolve – whereas at E3 I played the Support class and the Kraken.

The first thing I noticed is that unlike other multiplayer games, constant communication is key, and I found that I didn’t always know who was talking – the HUD didn’t have the class icon and the name of the person speaking. That along with a talking icon indicator over the head of the player (even off-screen much like a waypoint marker) would have been very helpful.

Map knowledge will quickly unseat the balance in this precarious “Versus” title – our medic was very experienced and his leading our party was probably the biggest factor in our wins. I found that unlike my E3 experience where no one knew how to play and we all died to a first level monster, the cat and mouse game was very intense.

As a monster facing off against our medic was harrowing – I spent most of my time running and hiding. I managed to find some rest by using the crouch to sneak past the telltale birds – but with a decent set of traps they managed to find me before I could upgrade.

I enjoyed E3’s Kraken far more than the Alpha’s Goliath – it’s ability to fly was a big advantage, though it was far less hardy. There were several walls that I discovered I could climb most of the way, only to be stuck there as some big, scaly fruit waiting to be plucked.

The combat is frenetic, and I can see this being a lot of fun – I’m concerned with the dependency on the party structure and I really don’t know if this is going to gain the traction it should – I mean, this is purely multiplayer and so the game platform depends on other players – and that is the real weakness.