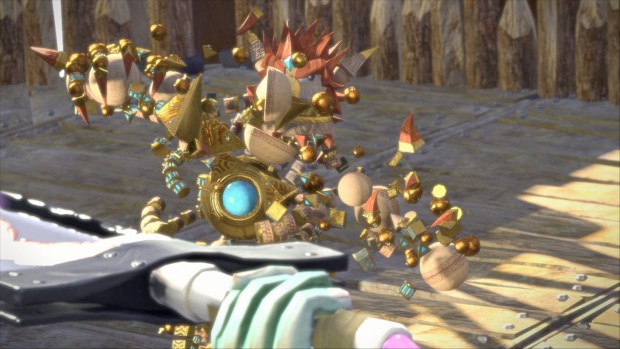 Let me begin with why I chose to head for Knack at the Sony booth – frankly, its puzzle elements in what amounts to almost a 3D platformer looked to be a slice of different. What I mean is, you play a construct who is composed of floating bits of material, similar but to far more detailed than a character like Rayman. I was looking forward to playing it, and being amazed by its graphics and gameplay. Well, I guess I got some of what I was looking for.

Knack is able to grow in size by collecting pieces of artifacts – the justification for trashing any breakable objects on your way through levels. His body will absorb materials such as wood, ice, or even steel – basically whatever element is presented. He can also shed his acquired parts in favor of shrinking down to his original size and becoming clear – a must for skipping past laser alarms.

While the different elements like ice were fantastic to look at, ultimately the combat devolved into either smacking the stationary enemies, or double-jumping and hitting attack to cannonball into them. Later on you can throw objects such as cars, but it really didn’t captivate.  Knack’s tiny, sneaky mode isn’t much better – in the demo (which, to be fair, does jump around a lot) it felt rushed. There was no developer on-hand for me to get an idea as to where it was going, but my first impression is that it’s a game with potential, but if they think their E3 showing sold it, think again. The real deal wasn’t nearly as compelling as the promo video.

The real reason Knack had a line was so people could get their hands on the new PS4 controller – it’s too bad that only three basic buttons were used.