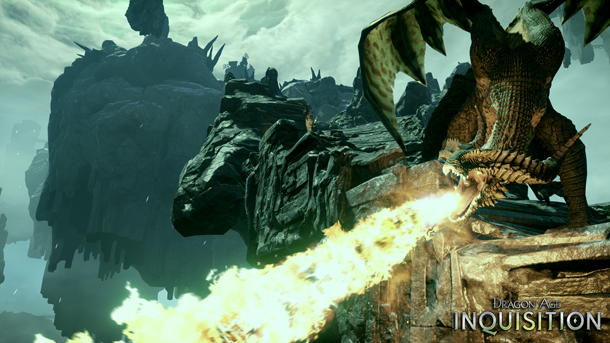 In a closed booth tour with EA and Bioware, we sat down to take a look at Dragon Age: Inquisition, the third title in the Dragon Age series. With a release date not too far in the future, this was our chance to see for ourselves how the near-final product was shaping up for its October release.

After the events of the second Dragon Age title, the world of Thedas is tearing itself apart. Chaos has left its mark on the protagonist, the lone survivor of a cataclysmic event that has ripped a hole in the sky. This tear is allowing all manner of Fade creatures to stream into the world, wreaking untold devastation on the population. These creatures hunt the protagonist for the power he or she wields – the power to control The Fade.

With a nod to Dragon Age: Origins, Inquisition will allow the player to select from four races, three classes, and both genders. For our demo, we chose a male Elven Rogue, starting our adventure quite a few hours into the main storyline. The first thing I noticed is that the game is far more visually striking than any video or screenshots might’ve suggested. The level of detail in every character, NPC or otherwise, the fidelity in every piece of armor or weapon, and the environmental effects are incredible. Animations, for the most part, live up to this same level of quality, the odd ‘snap to position’ of a beta product here and there notwithstanding.

The demo opens with a clear demonstration of why the Mage Guild and Templar conflict is a present threat to everyone in Thedas – the Templars are roaming the countryside, killing anyone they suspect is aligned or in support of the mages. As demons and worse have poured into the countryside, the two most powerful factions instead choose to war with one another.

We begin near Lake Luthias – an area larger in size than the entirety of Dragon Age: Origins. This is just one area of the two nations that are filled from edge to sea with snow-topped mountains, acrid bogs, lush forests, dangerous deserts, and far worse. Our demo driver quickly addresses the largest concern that most players had—combat. Dragon Age: Inquisition is a blend between the real-time tactical combat of Origins, and the more action-oriented Dragon Age II.  At any point you can pause and issue commands and powers, direct your companions, and then unpause to unleash your self-directed righteous fury. As our character class is a rogue, we used stealth to move in behind a large Templar soldier, helping to negate his oversized Kite shield. Our demo driver was using an Xbox One controller (it was unclear if this was running on a PC or said console), and the issuing of commands looked simple and effective. Hands-on time wasn’t available, but that’ll be the true proof.

In an area near Redcliffe Village, we get to see a new world feature; cause and effect. We are told that there is wildlife in the area that can be hunted, but overhunting can cause the population of those creatures to reduce, leading to the unbalancing of the ecosystem. As you build your Inquisition, they’ll begin to patrol the area which will also have some unnamed effect. Players also fortify strongholds and assemble an army, which would further compound ecological impact around Redcliffe—the staging ground for our forces.

Dragon Age: Inquisition feels like a reinvention of the series, featuring the largest cast of characters to date, mounts including exotics, a full crafting engine, and over 200 talents and spells with which to customize your party. Players need every ounce of power when facing the true apex predator of Thedas—Dragons.

Far larger and more dangerous than ever before, we encounter a Ferelden Frostback in an area near the Blood Cliffs. With a head that is taller than even our largest companion, the bests are awe-inspiring. As the team dodges fire, wing buffs and fireballs, the beast descends; unleashing rakes, roars, claws and razor-sharp teeth. Targeting individual limbs–like the front leg–we use our range skills to drive the beast away for a momentary respite from its relentless assault. Landing on an outcropping nearby, the Frostback rains down jets of fire and deafening screeches to stun our team.

A new mechanic; the team now uses a common resource pool for special powers.  Our mage uses a bit of it to slow time, allowing the team to focus heavily on the beast’s leg, toppling the creature and exposing her head for attack. Sensing her imminent death, the creature scrambles away and scorches the landscape from a perch too high for us to reach. Our mage heads to a nearby crushed bridge, “energizing” it to reassemble its shattered form.  As we close on the beast, it flees the scene to fight another day.

Jumping ahead past a branching choice that decides the victor in the war between the Mages and the Templar.  Having taken up residence in Redcliffe Castle, we meet Dorian–a Tevinter mage who is very interested in restoring his honor and that of his homeland. Descending into a nearby prison, we can hear someone being tortured inside. As we enter the room we see Lillianna; our old friend from Orlais has used our distraction to kill her guard captor. As she rejoins our party and we ascend into the courtyard we can see that the breach between worlds has permeated the sky. As Fade Rift Demons and Shades assault our team and are defeated we are free to seal these rips in the fabric of the world; backstabbing Venatori Spellbinders, sniping them from higher ground, and unleashing our companion Iron Bull at close range—we do exactly that. Who you have in your party clearly has a direct impact on your combat effectiveness, as well as the usual Bioware banter we’ve all come to know and love.

As we charge into a mage-sealed door we find Alexius, Dorian’s former master.  As we engage the mage with our crew and launch a volley of powerful magic against him, he rips the Fade open to summon his horrible demonic allies. His corruption confirmed, we finally dispatch him. In true villainous flair, the room begins to come apart.

It’s clear, even in this short demonstration, that the tagline “Lead them or fall” is more than just a catchphrase. Choices that matter, deep compelling companions, and a vast landscape larger than ever before await us on October 7th. There were a lot of RPGs at E3 this year, but there wasn’t one that could stand up to the incredible showing of Dragon Age: Inquisition. Congratulations to the team on winning Best RPG of E3 2014.