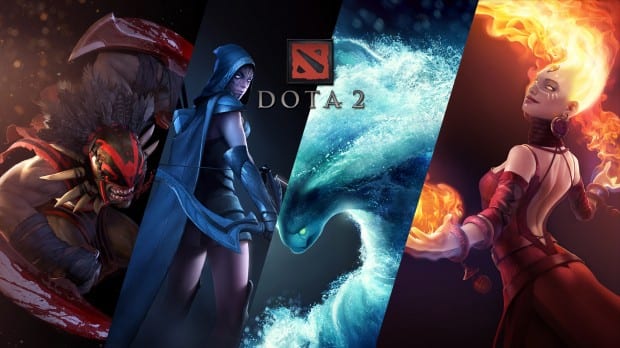 The last time the world heard about Defense of the Ancients (Dota for short), the game was a free mod for Warcraft III: Reign of Chaos. Since Dota’s original release, the little MOBA (Multiplayer Online Battle Arena) has grown and flourished, becoming one of the most popular and competitive games on the internet. Now a standalone expansion, titled Dota 2, is (hopefully) months away from release. The game receives regular updates, and is currently playable in a not-so-closed beta.

Dota 2 is set in a fantasy world where two factions, The Radiant and The Dire, fight an endless battle for supremacy with the aid of numerous heroes recruited from across the world. The game pits two teams of five against one another with the ultimate goal of pushing past the enemy’s defenses and destroying their home base, or “Ancient.” Players get to choose from one of 87 different heroes, who instead of being divided by class, are categorized by the character’s primary attribute of Strength, Agility, or Intelligence. The characters are then classified by those who fulfill a certain role, like the Tidehunter (initiator-carry) or the Venomancer (support-pusher). Once on the battlefield, players are faced with managing three separate ‘lanes,’ or primary pathways running between each ancient, in the middle of which waves of Ancient-spawned minions are constantly fighting. Players level up by killing minions of the opposite faction, enemy heroes, or the stationary creeps that dot the map. Kills give gold and experience, which goes towards buying equipment and upgrading abilities respectively.

“If light cannot escape me, what hope have you?” –Enigma

[singlepic id=8456 w=320 h=240 float=left]To those accustomed to faster gameplay, Dota 2 may seem a bit slow at first. The early game is typically a grind for gear and levels, with players trying to pick each other off or overwhelm an undefended tower. Late game, however, is a frantic back and forth, each team trying to push past the other to reach the main base, or sometimes even racing for the kill. My initial experience of the gameplay was one of terrible confusion and sudden, grisly deaths. The user interface and level up system is easy to use and fairly straightforward, but the in-game item shop was a maddeningly unhelpful and disorganized mess. Trying to figure out which of the numerous items (there are easily over a hundred) was the one you wanted while fighting to defend your lane proved to be a nearly impossible endeavor, and I’m sorry to say I eventually gave up and spent the first half of a game familiarizing myself with the shop.

The player community didn’t help much either. Fiercely competitive and harshly unforgiving towards mistakes, the players of Dota 2 get mad, and they get mad fast. Thankfully, I was able to persevere through the brutal learning curve and actually become decent at the game. Once I climbed that mountain, the game became a ton of fun, whether I was in an hour long grudge match that had my heart pounding at the finish, or a ten minute steamroll that left me cackling with glee atop a mountain of the enemy dead. Once the player figures things out, Dota 2 becomes a skill based game. Each hero has access to four unique abilities, which can be upgraded as the hero levels up. How you build your character affects team performance, and evolving your character to fulfill their role is of great importance. Despite having so many characters to choose from, the game is incredibly well balanced – how you play has more effect than what you play.  Skill alone does not win the day however – teamwork is everything in this game, and a little synergy (or lack thereof) can be the difference between victory and defeat.

[singlepic id=8460 w=320 h=240 float=left]The graphics of Dota 2 seek to recreate the same feeling gamers had while playing the original. Brightly polished and aesthetically pleasing, the world is a beauty to look at whether you’re wading through blue waters or ascending the gray steps of the enemy base. Character animation is streamlined and developed – your character even starts to limp if their health is low. Spell and attack animations are beautiful but not overwhelming; even if a large number of heroes or creeps are on screen using their abilities, one will still be able to take in the situation without getting confused. I won’t say the graphics are the best thing I’ve ever seen, but they’re charming and easy on the eyes.

While the graphics are good, the audio is better. Crisp sound and an epic soundtrack never get to be too much, and overlapping effect noise is never an issue – if all ten players were in the thick of it, you would still have clarity of sound. The voice acting is a point that definitely has to be mentioned. Every single character has their own unique, and superb, voice acting, and each hero has a taunt personalized for every other character! That’s a lot of one-liners! Situational recordings react to what your hero is doing, and there is a different line for downing an enemy, low health, death, buying items, and so on. The recordings are cycled through a number of responses, so it takes a long time for a particular line to get old.

[singlepic id=8463 w=320 h=240 float=right]Dota 2’s controls are easily mastered, considering you have only four abilities (some of which may be passive anyway) and carry a limited number of items or consumables. If for some reason you find the controls layout undesirable, all controls and hotkeys can be remapped from the main menu. The real downer for controls comes once again with the item shop. Hotkeys, coupled with the shops’ quick-buy feature, become a necessity for purchasing items while playing, and the controls here are, like the shop, sadly clunky and confusing.

Despite being in beta, Dota 2 has a surprising lack of bugs. In my time playing I have never once seen screen tearing/had a graphics issue, heard broken/static sound effects, or experienced bugs of any kind. I haven’t even had lag – an impressive claim for an online-only game, and I was only once disconnected when my internet connection was ‘mysteriously’ severed (thank you, cat).

“I have seen the future; you’re not in it.” – Faceless Void

[singlepic id=8464 w=320 h=240 float=right]Once you get past the daunting learning period, Dota 2 has a bottomless pit of replay value. With so many heroes to choose from, every game is going to be different as hero combinations change and alter the gameplay. If I ever get tired of playing one hero, I can easily switch to another randomly, and be guaranteed to find a new and refreshing style of play. If fighting other players isn’t your bag, you can team up with other people against an AI controlled team. Not nearly the same level of difficulty, but it’s a good way to get the hang of things.

I recommend Dota 2 to gamers who aren’t afraid of a little challenge. Overall, the game is a gem of strategic and thrilling PvP that offers hour after hour of entertainment. The item shop and learning curve are obstacles yes, but if Valve pays attention to the beta testers, those problems will hopefully be fixed, or at least abated a little. Even with these flaws, Dota 2 is a well-balanced, graphically pleasing, and sophisticated MOBA that is definitely worth the effort. The game is supposed to be released in the coming months of 2012 as a free-to-play title on Steam, and when it does I think Valve will have created another masterpiece. On a cautionary note, don’t play Dota 2 if you’re not prepared to descend into a cesspit of profanity and unbridled rage. The player community can, at the drop of a hat, become a very vile and hateful beast that is reasonless in its spite of any less-than-perfect players. You have been warned.