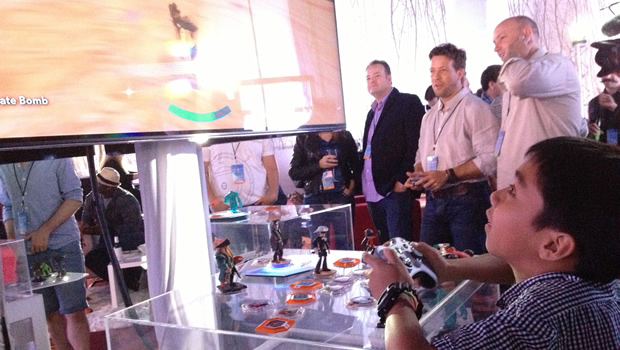 E3 hasn’t even begun in earnest yet, but we got a sneak peek at one of the powerhouse titles of the show – Disney Infinity.   Disney Infinity is not exactly the game you think it is.  Comparisons to Activision’s Skylander series are inevitable, but having gotten hands-on with the title, I can tell you that they are also wrong. While they both use collectable figurines, that’s where the comparison ends.

Disney Infinity is an aptly named game.  The way it differentiates itself from any competition is the way it utilizes the rapidly-expanding universe under the Disney umbrella.   The game has two main modes of play – Play Set and Toy Box.   To fully explain how the Play Set mode works, we need to cover how the collectable figurines function.

Play Sets
When the game ships on August 18th of this year you’ll get a “Starter Pack” – two figures, a World Disc and the Infinity Base.  The Infinity Base is a thin platform in the shape of the game’s DI logo that has three open spots on it.  The two round spots are for characters, and the third hexagonal-shaped spot is for “World Discs”.  These discs unlock the Play Set – that is to say the world in which you’ll play these characters.  These Play Sets are what truly differentiates this game from any other – they are not just simply different sandboxes where you can play.  Each Play Set offers a universe-specific area in which to play, but it also offers a universe-specific way to play.  For instance, The Lone Ranger has a world that focuses heavily on riding horses, chasing down bad guys on trains, and fighting outlaws Western-style.  Conversely, the world of Monsters University is a college scene that has Sully and Mike doing fun little platformer puzzles and challenges to raise their school score to beat rival Scare Tech.  We also saw a quick nibble of some Pirates of the Caribbean Play Set gameplay, but we didn’t get to see a lot of specifics on that quite yet.

While the Play Set mode is property-specific, the Toy Box is literally as wide as your imagination.  Any collectable you have unlocked can be accessed in the Toy Box mode, allowing you to mix and match heroes and villains from dissimilar worlds into one giant playground (you cannot take non-canon characters into a world where they don’t belong in Play Set mode, so no Mr. Incredible in Monsters University). While the unique character-specific worlds are awesome, I think it’s in the Toy Box that imagination can run wild.  This mode is a free roaming world where the player can feel free to build, customize, and explore anything they want to with any character they desire.  Want to race Lightning McQueen and Holley Shiftwell against Violet from The Incredibles driving Quora’s car from Tron: Legacy?  Care to build out the Disney castle and expand it with crazy spires that reach far into the sky?  You can create a world of your very own, and your only limitation is the characters you’ve unlocked and the world you build.

While we didn’t get to go hands-on with it quite yet, we did see a pre-cut video of the developers building worlds in the Toy Boy.  The verticality of what was shown exceeds anything you’d expect, showing Jack Sparrow jumping from the top of a castle stacked on top of a building, stacked on top of a maze, stacked on top of….well you get the idea.  Not unlike Minecraft, this building engine looks like it snaps together with what looks like a massive pallet and almost no rules.

Power Discs
In addition to the figurines and World Discs, you can also use a pair of Power Discs on the Infinity Base.  Slipped underneath your selected characters, you can utilize a disc that increases your health by 20%, increases your wealth 10% faster, allows you to do 10% more damage, or reduces your incoming damage by 10%.  You can use and combine any two of these in Toy Box, but there are also discs that can change the terrain, textures, and theme of your game.  The announced sets are from  Wreck-it-Ralph, Finding Nemo, Alice in Wonderland, Tangled, Frankenweenie, and The Nightmare Before Christmas, but I have no doubt that those are just the start.  In addition, there are 8 Power Discs from the worlds of Cinderella, Toy Story, Lilo & Stitch, Up, Peter Pan, Mulan, Dumbo, and Mickey Mouse announced, but a trailer we saw clearly showed the Light Runner from Tron: Legacy.  Could this mean a full Tron Play Set?  It becomes an instant buy for me if that happens….

The Retail Connection
There is obviously a collectable nature that is attached to Disney Infinity.  The Power Discs will be sold in “Blind Bags” in pairs for $4.99 at retail – you won’t know what you get until you buy it.  This means you’ll likely have to trade with your friends to get a complete set.   The Play Sets are looking to land around $29.99, with single figures coming in at around $12.  The reason that doesn’t bother me is that each will come with a completely new adventure and play style – they aren’t just a pallet swap.  In the case of the Play Sets, that means an entirely new world to explore.   In this way, Disney Infinity becomes the platform, and the Play Sets becomes an infinite world of content.

I leave you with the following ideas in your head:  Playing through the world of Star Wars and Marvel with your children in cooperative play.  Excited now?

Stay tuned for our continued coverage as we meet with Disney for a more in-depth look at their E3 lineup.