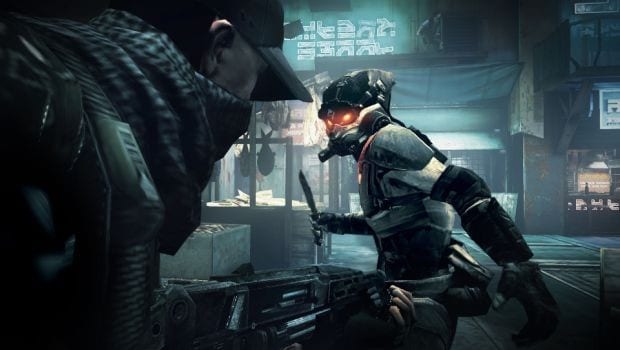 Killzone was the game that many used as a benchmark for what the PS3 was capable of rendering. Developer Guerilla Games Cambridge wants to make that same statement for Sony’s handheld – they want to be the benchmark for the Vita. Taking an entirely new approach to the series, in Killzone Mercenary you are no longer fighting for either side – your loyalty is to the highest bidder. You play Arran Danner, an ex-Army soldier from the Colonial Army of Earth, but after leaving the service you were picked up by “Phantom Talent Corp” – a PMC focused on fighting both sides of the war to ensure they meet their one and only objective – a healthy profit. We got hands-on with the multiplayer and single-player aspects of this ambitious title for several hours.  It’s time to take a deep dive into Killzone Mercenary.

[singlepic id=10448 w=320 h=240 float=left]In production since early last year, the folks at Guerilla Cambridge have a pedigree that includes multiplayer maps for previous Killzone titles as well as Vita superstar LittleBigPlanet. Since the Vita has a comparable level of power to that of the PlayStation 3, the team simply used the Killzone 3 engine on the handheld. Filmic post processing, tone mapping, HDR lighting, dynamic light sources, and volumetric fog are just a few of the bells and whistles that the team has brought to the handheld. Almost no sacrifices had to be made to get the engine to run with a stable framerate for the Vita, and having seen it in person I can easily agree with that assertion.

Being a mercenary, your slogan is simple – “War is our business”. Your loyalty is to the job. You don’t care who is right or wrong, you don’t give a shit about medals, and you don’t ask questions, except “How much does it pay?” To that end, clients will hire you, give you objectives, and pay you as long as you get results. This means that, for the first time, you’ll be fighting for the ISA as well as the Helghast.  The 6 to 8 hour single-player campaign will be woven in between the events of Killzone, Killzone Liberation, Killzone 2 and leading up to Killzone 3. This means the “Liberation of Vekta” mission and the Spearhead of the invasion of Helghan (“Operation Archangel” at the start of Killzone 2) will fill in some back story that serves to enrich the Killzone universe. As the game progresses, you’ll be asked to evacuate an ambassador and will find yourself embroiled in a fight for the Ambassador’s young son. Somehow his fate will change the course of the war, so both sides want him. Your loyalty to the almighty payout will be challenged.

[singlepic id=10451 w=320 h=240 float=right]Since the game is all about the contract and getting paid, everything you do gives you cash. Every kill, every objective, every stealth objective met, and everything in between will net you Vektan dollars. Those dollars can be spent with your new friend Blackjack — a weapon dealer that always has new toys for you.  New guns, better armor, fancy grenades, and ammunition is just the start – he also has an entire arsenal for your new Van-Guard. The Van-Guard is a wrist-mounted gauntlet that has 8 weapons built in. For example, you can unleash an orbital Ion cannon strike from your wrist, launch the Mantys drone which can spot targets or even punch holes in their face with a pair of vicious forward-facing mandibles, or launch shoulder-mounted flechette missiles courtesy of the touch screen.  The Mantys came in very handy when I was pinned by two flanking machine gun turrets with forward-facing protection.  Unable to make forward progress, this drone allowed me to sneak up behind the gunners and take them out. The Van-Guard powers recharge over a period of time, but that’s sped greatly by effective kills. Cash made in single player carries to multiplayer and vice versa, so your effectiveness is multiplied by the toys you bring to the fight. Additionally, the game will also have three new challenges for each single-player mission that unlock after you complete them. The objectives can be a number of kills or precision as examples.

[singlepic id=10452 w=320 h=240 float=left]Multiplayer is a big focus for the title. Featuring four on four fighting, six maps, and three modes, the game is built from the ground up to be a full experience, not some ported attempt. The game will ship with a deathmatch mode, a 4v4 team deathmatch, and the classic Warzone mode which gives players 5 rounds with alternating objectives. It’ll also take full advantage of the Party system, letting you instantly join your friends in their game in progress or chat with them easily. As you take down your enemies you’ll also earn Fame. Each player has a Valour ranking that grants you bonuses. The better player you are, the higher your card value. When you are killed, you’ll drop that card to be collected by your killer. The mercs with the highest value of cards at the end of a certain period of time gets additional bonuses and medals.  Since all of this is fed directly to Killzone.com, you can bet the competition will heat up quickly. From my little bit of time with multiplayer, I immediately had flashbacks to another Sony-backed title – SOCOM. Deathmatch had sub-objectives, and the maps were focused and well-balanced – evidence of the Guerilla Cambridge pedigree on previous multiplayer maps. It honestly felt like playing multiplayer on the PS3, and that’s saying something.

Using the Vita’s touchscreens in a way that doesn’t feel like a gimmick was a major focus for the team. To that end, they have ensured that the touch screen controls are only used when it makes the most sense, not saddled onto every aspect of the game. This means you’ll use the rear touch portions to zoom your sniper rifle, you’ll use directional swipes for the “Brutal Melee” attacks, you’ll pull levers and various other controls, and you’ll activate several of the Van-Guard weapons in the same way.

[singlepic id=10453 w=320 h=240 float=right]During the hands-on mission, entitled “Lightning Strike,” I got an opportunity to see another item that used the touchscreen – hacking. Many games on handhelds simply have the “Press X to hack” lazy approach, but this thankfully isn’t the case here. The interface for hacking has six symbol sets on the left and right edges of the screen with a set of hexagons in the center. Inside of the hexagons are patterns that have missing pieces. Using two of the items on the sides you’ll fill those symbols in by piecing in the ‘holes’ in the pattern. Since it is also timed, it presented a cool challenge that made for a good break in the action.

After every single player mission (and I can only assume the multiplayer ones as well), you’ll submit an “Invoice” for your PMC activities. It shows your Engagement Total (total credits earned), any bonuses you got for Valour Cards, medals you’ve earned, and any purchases deducted to result in your total billable activity.  It sticks with the Mercenary fiction laid out in the game and gives some replay value as you can always try to do it cheaper, faster, and better.