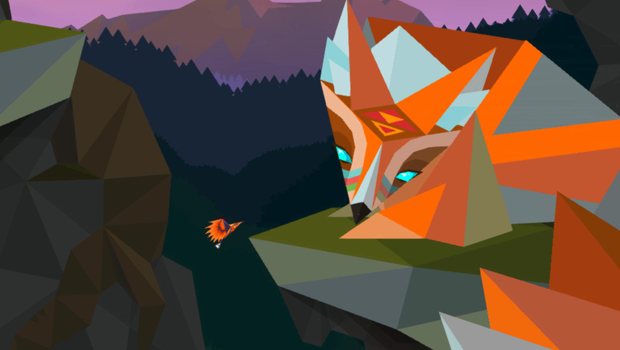 Broken Rules’ Secrets of Rætikon is a Steam Early Access game that literally drops you out of the sky and down into a beautiful 2D world of open exploration and puzzle solving. More than that, it’s a game which tries to tell a story with as few words or instructions as possible – relying on the ability of its creators to deliver a world interesting enough to encourage exploration, but intuitive enough that you’ll figure out exactly how you’re meant to explore things with a minimum of nudging. I managed to get some hours of play time in on this one, and I’m happy to report that what I see is not just encouraging progress, but a puzzle-exploration game which is fun and engaging even as it stands.

Secrets of Rætikon has an art style that stands out immediately. Vibrant colors abound, and the entire world is heavy on the sharp angles – as if some creator-deity tried to build a lush fantasy world entirely out of colored triangles. (Yes, I know, that pretty much is what every 3D game developer does – but this is 2D!) It’s distinctive and pretty, with everything from the wildlife to the various ruins all being wrapped up in a similar style that nevertheless has enough room to allow for some tremendously distinct creations. The few things that aren’t so angular tend to be effects in the world – the hazy glow of a magical symbol, or the winding curves of a constant stream of air.

And then there’s your character. Secrets of Rætikon drops you into the role of a bird who has literally fallen out of the sky – landing in the forest, whereupon you’ll quickly be walked through a sparsely-worded tutorial instructing you on the game’s controls. You fly, you dive, you pick up items in your claws… it’s straightforward and easy to learn, with precious little onscreen information given or required for you to play the game. Once you’ve accustomed yourself to flapping your wings and diving around as needed, you’re off to discover what secrets this world has to offer you – and not only is the world wide open but, perhaps crucially, there is also very little instruction given regarding what you should do or where you should go.

In that way, Secrets of Rætikon reminds me heavily of past titles like Myst – where a big part of the draw is slowly, carefully piecing together the logic of the game world, finding out that such and such an obstruction is actually a puzzle rather than some glorified door waiting for the right key to be activated to get past it. Broken Rules clearly knows what they’re doing on this front – I enjoyed doing something as simple as figuring out the purpose for the various glowing triangles you can collect in the game, or discovering that there was more to be gained from a nest of baby birds than simply knocking them out of the nest or treating them as yet another destructable object. After a discovery or two, I quickly found myself paying far more attention to all the little details in the game – realizing that sometimes there was more to one or another object than what was at first obvious.

That’s not to say the game is entirely devoid of visual cues. For one thing, the camera may pull back in areas where something of large size is of key interest, or the aforementioned use of color will draw your eye to an out of place scrap that is actually an important piece of a larger puzzle. Beyond this, there are ruins and archaic devices strewn about the Secrets of Rætikon world – all written in a language you’ll have to decode while playing the game. To that end, you can find individual letters during your travels in the game, which will show up on your screen whenever you’re reading one of these alien sentences – though I found myself able to suss out some of the letters just by peering really hard at the untranslated text and making a few mental connections.

While the gameplay and the graphics have been impressive, so too has been the work the developers have put in on this title since my trying it out – including two sizable alpha upgrades just in the course of the ten days I’ve had the game installed, including the addition of new graphics, new platform support (here’s looking at you, Linux 64-bit and OS/X 10.6) and more. Not only are the developers doing a lot of work on their Early Access game, but they’ve made it possible for players to do the same. Secrets of Rætikon not only has a single-player campaign, but a built-in level editor – which can only breathe even further life into this game for many players, much the way Portal 2 and Super Meat Boy have seen swarms of fan-made content.

Even as a Steam Early Access title, Secrets of Rætikon manages to stand out in way after way. It’s a graphically lovely open-world puzzler that not only is shaping up to be a great game itself, but continues the trend of giving players the ability to create their own worlds once they’re done with the developers. For any fan of puzzle games, this is definitely one to watch for 2014.