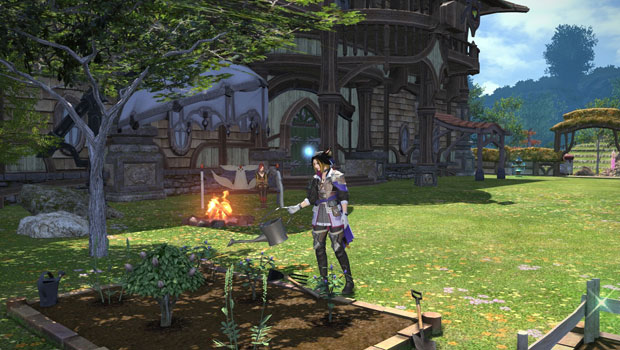 Not many series can boast that they’ve made it to their 14th installment; none have done it with as many offshoots and spinoffs as Final Fantasy. I got the chance to spend a week playing Final Fantasy 14: A Realm Reborn for PS4 and dipped my toe into the vast pool that is Square Enix’s massive MMORPG. Expect an in depth review in a few weeks, but until then these are my first impressions. Character creation is simple, but doesn’t offer much in the way of customization. Players can choose from five races, each with two subsets, and eight different classes which branch off as you level up. An unimpressive assortment of different faces and hairstyles make it almost impossible to create a character discernible from a lineup of five players of the same race.

The story that I’ve experienced so far is confusing and seems to basically just be a vehicle to carry the player through the game. Even though I’ve been talked to about being the chosen one by a giant floating crystal, I still feel like a peon at level 16. Perhaps this will change as time goes on, but for now I have to say that ensuring the safety of bean farmers is not the sort of grand task I was expecting a Final Fantasy game to give me several hours in. There are a plethora of quests in Final Fantasy 14. So far, progress feels steady, and I haven’t had to grind any levels to unlock the next quest. I’ve been floating along pretty easily, and have yet to have to join a party, save for Guildleves, which are quests with dungeons and bosses which require a party of 4 players. Players can be automatically found through the game’s built in matchmaking system which has been pretty quick and easy to use.

Final Fantasy 14 is a beautiful game. The look and feel of the game is definitely 100% faithful to the source material right down to the animations of spells and various monstrous creatures. Landscapes are lush and densely populated by trees, rocks, and cliffs easily set locations apart from each other. When I first heard about Final Fantasy 14 on PS3 and PS4, I became extremely concerned about the controls. Luckily I only have a few gripes. Using the Dualshock 4’s touchpad to maneuver menus is finicky, and controlling sliders is extremely painful. I found myself at times dragging entire windows when trying to click a simple option due to the touchpad’s high sensitivity. Other than the touchpad mishaps and occasional targeting problems, the controls transferred to console quite well. Sets are chosen with R2 and L2 while skills and items are assigned to the face buttons and D-pad within those sets. So far I’m enjoying my time with Final Fantasy 14. Some of its mechanics, such as crafting and unlocking new classes, are just starting to come into play, so stay tuned for my full review coming soon.