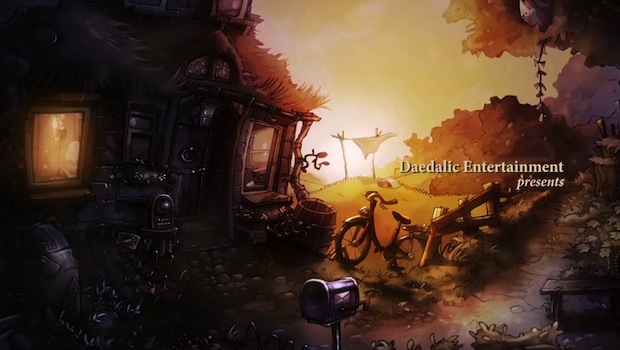 There was a time when I was young where I would roam about the fields behind my house during summer vacation, discovering new realms and conquering imaginary foes armed only with a stick-sword. There was something special about nature to me then, whether it was the peace I felt hiking through uncharted woods, or claiming a giant boulder I’d found as part of my kingdom. Thus, when I sat down to play Night of the Rabbit, I formed a connection almost immediately to Jerry Hazelnut, the 12-year old protagonist, who sets out to explore the woods behind his home at the end of one British summer, and ends up discovering far more than he or I could ever have imagined.

[singlepic id=12395 w=320 h=240 float=left]Night of the Rabbit is a point-and-click adventure from German developer Daedalic Entertainment that hearkens back to the best days of LucasArts, a company whose demise continues to leave me feeling melancholy and blue. However, NoTR comes with the updated technology that gamers expect from a contemporary release, employing positively gorgeous storybook-type illustrations as the backdrop for each level.

I felt privileged at my chance to try out the Beta version, as the game won’t be available until May 29th, but nothing felt undeveloped or overlooked in my experience of testing it out. This may sound like a general statement, as well as one that might go without saying since the developers wouldn’t have given Beta access unless it was pretty much polished, but there are certainly some specific issues that could have slipped through the cracks.

[singlepic id=12393 w=320 h=240 float=right]John Walker pointed out in an interesting article on the game’s upcoming release that Daedalic has had some minor hang-ups in the past in terms translating the material from the original German script. Having majored in a foreign language along with film, I’ve seen my share of bad subtitles and linguistic snafus, but not a single word felt wrong or out of place for me with NoTR. In other words, the translatory experience of a game that was originally conceived in German went off without a hitch. You’d be surprised how quickly poor writing can yank you out of the storybook world that the developers have strived to create, but as I say, nothing was amiss here in terms of the story’s basic mechanics and cohesion.

I know what you’re thinking – great, they translated it well, but is the game actually good? The answer is yes – it’s terrific. When you see the level of creativity that the developers poured into every screen, every interaction, and every bit of dialogue, you’ll wonder how they ever managed it.

[singlepic id=12394 w=320 h=240 float=left]One caveat that will probably not surprise most seasoned point-and-click adventurers is this: do not let the 12-year old main character or the main theme of magic fool you – this is a very tough game. Those of you familiar with the term “pixel hunting” will know that most games in this field require it to some degree, i.e. the practice of dragging your mouse very slowly over parts of the screen in order to find something you’d previously missed. I would say there’s some of that at play here, and I’d say the game made me feel somewhat sorry for myself, pitying my own puny intellect for not seeing the solution, etc. but that’s why you need patience and dedication to keep moving forward. After all, progress is something that comes all too easily in most video games these days.

[singlepic id=12389 w=320 h=240 float=right]We’ve forgotten when making it to the next level demanded real sacrifice – I remember tears of frustration coursing down my 10-year old cheeks when I realized that I had forgotten to make friends with Jollo the clown at the beginning of King’s Quest VI, and if you forget that, then he reports you to the evil Vizier al-Hazared at the very end of the game, thus making completion impossible. I’m not saying Daedalic aims to bring that level of challenge back per se, but what I’m trying to say here is that it takes guts to make adventure games right. I think it’s also true that you have to have a special mind to make them, especially when you’re trying to judge the average intelligence of your audience members, and figure out the correct difficulty for puzzles based on what kind of stamina you’d think they have.

[singlepic id=12390 w=320 h=240 float=left]These considerations are often lost on other genres, whereas they remain the top priority for point-and-click adventure. Who would have expected such complicated problems from such a simple gaming interface? The engine did not cost millions to develop; there are no mind-numbing physics that reflect every last atom of the universe. And yet they can so easily be terrible, so difficult to pull off. You have to be some type of masochist to even want to make them, let alone actually bring one into existence. However, with the magic I found in Night of the Rabbit, both literal and otherwise, there came a kind of warmth from the atmosphere and design that achieved a couple of things: for one, not everything was about the puzzles. The playable cut-scenes, the gorgeous hand-painted backdrops, everything contributed to a sense of splendor that staved off any possible frustration I might have experienced with the puzzles, because visually it was such a treat.

You’ll have to play it for yourself to really see what I mean, and I recommend that you do. The game comes out on May 29th for Mac and PC, and will be available for digital purchase through Steam. Check out the game trailer below, along with some screens to get a sense of the outstanding visual presentation, something that is never a surprise coming from the talent working at Daedalic. You can also find out more at the game’s official site.


The Night of the Rabbit - Game Trailer