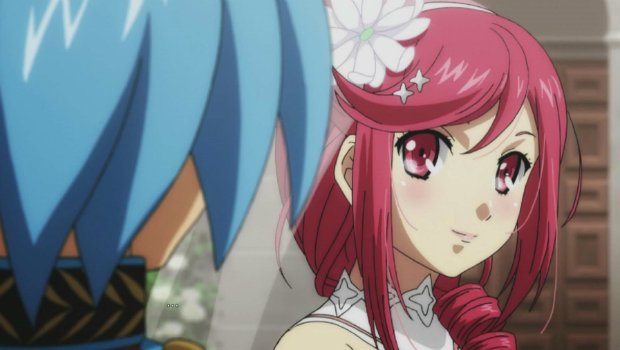 A wedding, a murder, and a very convenient royal ability to travel through time.  These are the foundations for the story of intrigue, mystery, and pent-up male sexual frustration that is NIS America’s Time and Eternity.  Time and Eternity is in theory a live-action RPG, but largely becomes a “choose your own story” anime through long cutscenes.  While I expected to play a JRPG and knew what would come along with it, I’m still in awe of just how many tropes, cliches, yawn moments, and weird dick jokes that the writers and developers of the game were able to cram in just the first few hours.

The game begins with our two lovers, one who you choose to name (I went with the default “Zack”) and the other a beautiful young girl named Toki, as well as their pet dragon Drake, sitting in their engagement home in the land of Kamza the day before their wedding is to commence.  Zack is clearly frustrated that he’s never been able to even kiss his fiance, much less any more debaucherous activity.  This is central to Zack, it is everything that he is.  He wants sex, badly, and even the slightest inclination of innuendo sends him into a tailspin of jarred libido.  Needless to say, his dialogue becomes very tired after just a few lines.  His partner Toki, and her three friends who introduce themselves a few moments later, don’t really offer any more interesting or less stilted dialogue, so he certainly isn’t alone.  Toki is a princess whose status has left her socially stunted and subservient to men.  Her friends are Quirky Girl (Enda), Snarky Rich Girl (Reijo), and Clumsy Cute Girl (Wedi), each coming with their own tired, used up lines about their lives.  Reijo in particular in a painful listen, as almost every one of her sentences starts with some reference to her wealth.  WE GET IT, MONEY EXISTS IN YOUR LIFE.

[singlepic id=12593 w=320 h=240 float=left]So, the girls, Zack, and Drake all sit around the table and discuss the upcoming wedding for awhile before Toki drops a bombshell: A psychic has told her that someone will die at her wedding.  Shocked, Zack starts to panic, but is quickly calmed down by his future wife, who insists she doesn’t believe a word of the prophecy.  The girls and Zack discuss the wedding further, with more uncomfortable comedy, and then the party is over.  The girls leave and everything is well and good.  The next day, the royal wedding commences.  Toki and Zack stand at the altar, proud and full of love, and exchange “I do’s.”  However, just moments before (stop me if you’ve heard this one) the lover’s first kiss, a loud commotion fills the church  as the doors burst open, revealing…assassins!

[singlepic id=12594 w=320 h=240 float=right]But is this girl Toki?  All this time, she has had deep red hair.  Now, all of a sudden, she has blonde hair!  Also, she’s apparently a “lady badass”, as she quickly leaps to her feet and defeats the assassins.  She looks at Zack with disgust for his inability as Zack begins to pass out.  In his daze, we hear a conversation between Toki and a mysterious girl named Towa, who is confirmed to be the blonde.  But who is she?  Where did she come from?  How is she so strong, and why?  Nothing is revealed, except that the two girls have a relationship (but for clarity’s sake, Toki and Towa are the same character), and also they can time travel.  Yep, sure as the sun can rise these two girls just happen to be able to hop-skip-jump through time, and they do, back six months, back to that fateful meeting between Toki and her psychic.

Cut to the past, where Toki is having an uneasy conversation with her psychic, Makimona.  Zack is there with her, but he can’t move or seem to speak.  Toki tip-toes around her origin from the future, while trying desperately to get information on just what the psychic knows.  The psychic reveals that she knows nothing, and that she simply pulled her prediction from thin air.  Zack desperately continues to try to get Toki’s attention, but to no avail.  We soon find out why Zack has fallen silent.  Toki turns and calls out for her pet, Drake.  Unfortunately, Toki’s time traveling has somehow captured Zack’s soul and placed it in her pet.  Worse yet, Toki has no idea that this mishap has occurred and believes Zack is still in the past, suffering.  They make their way together to their new home, through the Kamza Forest.

[singlepic id=12595 w=320 h=240 float=left]Finally, after roughly an hour of time spent in this game not having done anything more than respond to questions or talk to Toki’s petulant friends, the overworld and battles begin!  In what amounts to a tutorial jaunt, Toki is attacked by a series of golems on her way out of the forest.  The battles are simple, fun, and action based.  The player can choose to attack from afar with a rifle or up close with melee combat with the flick of a stick, and the strategy of when to get close and when to stay back plays quite well. After dispelling these creatures, Toki and Drake make their way back home and meet with Toki’s friends once more.

Toki tells her friends that she wishes to meet with the assassins and ask why her wedding is being targeted.  Reijo and Wedi want no part, but young quirky Enda is all for going to a back alley and snooping for assassins.  She says that she knows where the Assassin’s Guild (yes, that’s what it’s called) meets and how to find them.  So, Enda, Toki, and Drake all take a trip down to the city, where they encounter two assassins, one female and one male.  The male assassin is a 100% rip-off of the character Shaggy from Scooby Doo, right down to the Casey Kasem voice.  They confront the assassins and a fight breaks out.  Toki takes care of business swiftly, causing the assassins to cry like children.  They call out for their leader, who emerges and starts another fight.  This time, however, Toki has shapeshifted into Towa, and is much tougher, once again quickly dispelling the assassins and their leader.

[singlepic id=12596 w=320 h=240 float=right]The would be assassins reveal that they are not assassins, but actually members of the Assassin’s Guild fan club.  While they don’t have any information that is useful themselves (they basically admit to lying by omission) they do know where assassins are known to frequent.  The assassin fans lead our heroes to the three islands that border the land of Kamza,  Before they depart, the leader of the fan club, a dashing young frustrated male by the name of Ricardo, reveals his love for Towa, which prompts a vicious bite from Drake.

Finally with a real lead, Towa and Drake travel to Zucchero Isle in search of assassins.  After an extensive search (effectively you, the player, just crossing from one side of the overworld to the next) one is found.  Without thinking, he reveals the location of the assassin hideout.  Blaming it on the girl’s beauty and charm, he attacks.  After a decently challenging battle in which our assassin babbles on about a fruit that can make animal’s speak, he sulks back to his hideout, defeated.  Towa and Drake look on at the future task ahead of them, both with their own needs to fulfill.

Having played this much of the game, I can’t say that the experience will be overwhelmingly bad or good.  Most of the drawbacks in this game are in basically every single JRPG that has ever been released, and they often become quaint reminders of classic gaming.  As frustrating as the cutscenes can be, they can be sped through or skipped altogether.  The battle system leaves me with a number of questions and a lot of intrigue on how it will be implemented.  Time and Eternity is slated for a summer 2013 release on the Playstation 3 and is rated T for Teen.  Stayed tuned to this website for upcoming information.