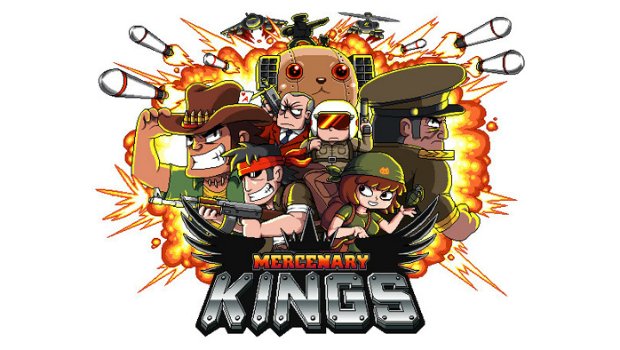 Nostalgia is a huge part of the gaming community.  With rapidly changing technologies and new parameters for what is possible, there is always a group of people who resist the changes, and pine for the old days of 2D characters and platforming adventures.  Tribute Games’ Mercenary Kings, the latest title from the makers of Scott Pilgrim vs. the World: The Game, is everything that a traditionalist would hold dear in gaming, but it falls pretty flat when asked to do anything else beside “look like an old game I couldn’t beat in 1995.”

[singlepic id=14823 w=320 h=240 float=left]If you’ve played Metal Slug, then you’ve basically played Mercenary Kings.  You choose a character, go through 3 or 4 color swap choices, and then start the action.  Rather than placing you through a gauntlet of levels like in the old days, you’re started out on a base of operations.  Here you can purchase goods such as grenades or first aid, choose which mission you’d like to complete, and then fly out to the battlefield.  In the field, you move left-to-right (mostly) shooting enemies and collecting resources, such as leather and glass.  Each mission is timed, as well as given a cash amount that it is worth.  Every time you die, you lose an amount of the cash you can earn for a mission.  When the mission is completed, you’ll be flown back to the base where you can restock your equipment.

[singlepic id=14824 w=320 h=240 float=right]There is a mods function, where you create modifications to your character with the resources you pick up in the field.  Each enemy carries a different resource.  Robots will yield silicon and aluminum and the like, while soldiers will drop wood, steel, or other such items.  There are numerous resources and different enemies always seem to drop something new.  When back at the base screen, a little medical technician will help you to build these mods, which can then be applied to the character two at a time.  Weapons can also be greatly modified.  This is really an interesting addition, and it’s something that could be expanded on with more options and combinations.

Outside of the modifications function, this game seems to be a simple run and shoot nostalgia fest, and for many gamers that just isn’t going to be enough to merit it’s ridiculous price tag of $14.99.  While there are screenshots out there that show some amazing weapons and fights with bosses, I found the game so insanely difficult that there was no way I could get there.  That in and of itself takes me back to the SNES days, where often I would only ever see the first level of a game.

[singlepic id=14825 w=320 h=240 float=left]Perhaps, however, it wasn’t the game itself that was so difficult, but the myriad of early problems that caused the difficulty.  With an early release like this, there is bound to be problems with the way guns shoot, the animations, and the like.  I personally was unable to see a whole 30% of the screen while playing, so I was unable to monitor my health, or the time elapsed during missions.  These problems definitely contributed to my frustration and will likely (hopefully) be fixed at the game’s full release date.  Other problems, like bullets going straight through an enemy, or being pushed over and over again into a pit of spikes, or simple poor enemy placement that forces you to take damage all take away from what otherwise could be a fun little experience.

[singlepic id=14826 w=320 h=240 float=right]Mercenary Kings is a good game with solid visuals and a simple but fun gameplay style.  While it may be a rehash of old ideas, there is a market for taking gamers on a trip down memory lane.  All said, Mercenary Kings is a fun little experience that if more fairly priced, would be a great addition to any die-hard gamer’s collection.  At a $15 price tag, this game is a little lacking.  Fans of the Metal Slug series and similar titles will be very happy to get their hands on this game, and experienced shoot-em-up players would be well served to get in now and help shape the game.  Others may want to wait and see what changes will come in the final product before buying.  The final product of Mercenary Kings will be available on Steam and the Playstation 4 console in Fall or Winter 2013.