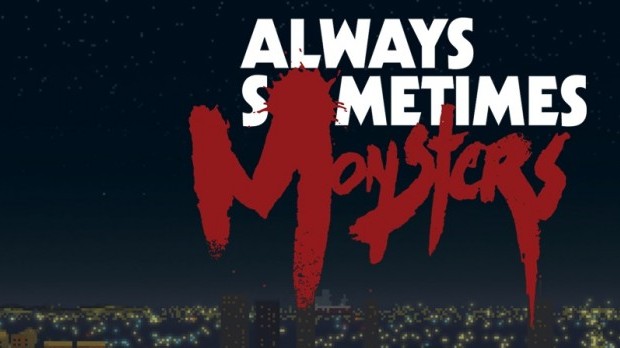 There’s a saying that you need to learn the rules before you can break them. Indie studio Vagabond Dog, and their game Always Sometimes Monsters, seem to think otherwise.

The game looks like something that was slapped together in RPG Maker. Tiny 16-bit-esque sprites and simple color palettes form the crux of the experience. But to judge it simply on its exterior would be doing it a total disservice — this is not your typical RPG. There is no combat; the conflict instead comes from how you deal with the constant stream of bad luck your character seems to find herself in.

[singlepic id=16421 w=320 h=240 float=left]Taking their experience as actual vagrants, the team over at Vagabond Dog have crafted (at least within the demo I played) a narrative that will speak to anyone who has struggled to pay the rent, or lost the love of their life to someone else. You play as a down-on-her-luck novelist whose book deal has fallen apart — and as a consequence, her rent is several months overdue. Her soulmate is about to get married to someone else, and it’s up to you, with no money or means to get to the wedding, to travel across the country and tell them how you feel.

Consequence is an important part of Always Sometimes Monsters. One particular scene I played had a character give me a hundred dollars for getting them the passes to SwagFest that they so desperately needed. Turns out — that money was actually his drug dealer uncle’s cash, and he is none too pleased about having it stolen from his deadbeat nephew. He comes at us with a shotgun. I can decide to turn tail and run and leave this scumbag to his fate, I can try to fight (and die in the process) or I can give the money back. I’m a nice guy, so I decided to fork the money over.

That’s when I found out how wrong I was.

[singlepic id=16420 w=320 h=240 float=right]It’s not clear in the demo (as it jumps around a lot, and nothing really sticks), but money is very hard to come by in this game — so when you do get some, you need to hold on to it. A couple bucks can mean the difference between making it to your next destination or being stranded with no way to get anywhere, the difference between eating or going without. They explained that every single choice will have some kind of consequence, and there will be a breaking point everyone will reach where you can no longer decide to make the “good” decision because it will no longer be the “right” decision for your own survival. They want to see how long it will take before players break their own code of ethics and begin to wander the dark path between right and wrong.

I saw a ton of games at PAX this year. I got a chance to sail the Caribbean in Assassin’s Creed IV’s single player mode. I piloted giant mechs in Titanfall. I outlasted hordes of zombies in Dying Light. But nothing has stuck with me quite like Vagabond Dog’s Always Sometimes Monsters. From the punk rock ethos, to the gravity of every choice presented to you, Always Sometimes Monsters has the potential of being one hell of a breakout hit. It’s sinister, it’s raw, it’s real, and it’s got soul. Each day that passes from now until its 2014 release is one that feels far emptier than it should.