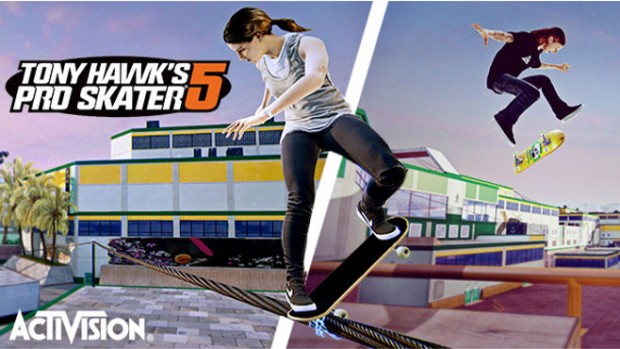 From the first moment I laid eyes on Tony Hawk’s Pro Skater 5, I could tell that this game is meant as a throwback. Everything about the game screamed nostalgia, aiming to recreate the core arcade-like skating experience found in the old days before Tony Hawk’s gaming adventures rolled towards over-the-top scenarios and plastic controller peripherals. This is very much a return to Tony Hawk’s better days, and former fans will feel right at home.

The E3 demo started off in a level known as “The Bunker” – a hybrid of The Warehouse (from THPS) and The Hangar (THPS2), which combined elements from both classic stages. From the moment you skate down that first familiar hill, you’ll spot the collectible S-K-A-T-E letters, the rails that hang from the ceilings above quarter pipes, and a growing special meter that will all trigger memories of the series’ roots. Even the sound effects are exactly as they were over a decade ago.

Picking up a controller, I felt right at home with a familiar control scheme and it took only a moment before I was busting out long, chained-together combos across surfaces, rails, and vert structures. In fact, the controls were almost completely identical other than only one discernable difference: the ability to slam down from the air to the ground mid-jump. A quick press of the triangle button sends your weighted skater back downward, helping to make those moments where you need to aim for a precise target much more manageable with further vertical control. This is not coincidentally the same button as rail grinding, which made air-to-rail combo transitions much smoother. It admittedly took a moment to adjust to this weight shifting, but after several minutes I had adapted to this new element and found the enhancement to work well.

One other noticeable change came from the ability to store up your skater’s special meter, rather than instantly triggering it like in previous installments. This change seems a little odd, as the special meter still fills up to full even with a modest combo, and former Hawk games also refilled the meter as it was being used, allowing for essentially infinite special to begin with. It ultimately doesn’t hurt to give gamers the option, but overall this felt like a change made for the sake of change, rather than one with a purpose. It just came off as unnecessary.

One of the more impressive new features introduced in Tony Hawk 5 is the concept of the online skatepark. While not playable in this demo, the developers assured us that players can join online free skate sessions with up to 20 players, with the mention that this number could possibly increase before the game’s full release. This session functions as an online lobby, with skaters able to challenge each other to competitive game types, or participate in co-op challenges. In fact, the whole single player mode will be playable in online co-op, with skaters teaming up to tackle score and collectible based challenges. This is perhaps the most exciting new feature, as some of the game’s tougher challenges – and the developers assured me there would be pro-level challenges – can now be double-teamed, giving both players credit for the mission progression. Of the new features offered by THPS5, the online modes are the ones that have the most potential to change the skateboarding genre.

Tony Hawk 5 also sees the return of one the most beloved staples of the series: the skate park builder. Functioning just as fluidly as it did in previous installments, skaters can once again construct their dream park, with as many or as few pieces as desired. As an added bonus, when skating around in park builder mode, the game can be paused on-the-fly, bringing up the toolbox and allowing you to literally change up the stage mid-combo. Once your desired level has been tested and approved, players can upload their level online where fellow skaters can sample their level, providing upvotes for those that are truly special. Leaderboards will then promote the best levels, giving gamers access to some of the most popular levels available.

When it comes down to it, Pro Skater 5 highlights a lot of what made the series so special in its youth –chainable combos, fun challenges, and a great soundtrack. But my takeaway from this demo left me wondering just how innovative this new installment will be. A few jumps in the online space, as well as some minor gameplay tweaks, are welcome additions, but it remains to be seen if they can really produce innovation, rather than mostly delivering the same old arcade. The retro vibe has been nailed, but I hope that this proves to be more than just a retread.

Tony Hawk’s Pro Skater 5 launches this fall on PS3, PS4, Xbox 360 and Xbox One. For more on Tony Hawk, as well as all of our other E3 coverage, be sure to check back to Gaming Trend.