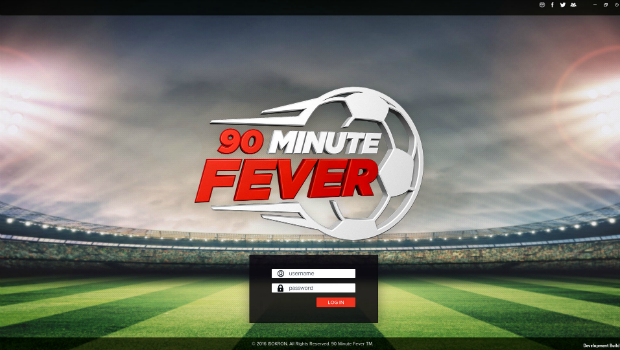 As fun and dynamic playing sport simulation titles is, there’s always been a looming sense of loneliness in the games, even with the best of the genre.  90 Minute Fever seeks to eliminate that aspect of sports simulation by creating a MMO-Simulation game, where rather than having you control the entire world, you can join others from around the globe world to simultaneously create an overall “world league” experience.

The game is a recent addition to the Steam Early Access library and a game still very much in transit towards completion.  A primordial game with a lot of growing to do, 90 Minute Fever shows a lot of promise, for what it’s worth.

90 Minute Fever is a soccer simulator, where teams are named by each player.  The teams are entirely controlled by players, with no AI teams.  You can have matches against players who are offline, as the lack of controls makes the matches view only.  Knowing the team you face is human built and designed makes for a competitive edge that makes the fairly boring gameplay aspect of a sports simulation “game” much more intriguing.

The first thing you notice about 90 Minute Fever is the incredibly dark and basic presentation.  Graphics consist of Black boxes with white, red, and grey text.  I would expect this to change as the game grows.  The layout is not very attractive, and isn’t the greatest use of presentation, but it is easy to navigate from page to page after an hour or so of use, and which is crucial in the sports simulation genre.

While most sports simulators allow you to micromanage your experience, allowing you to manage multiple teams, this game only gives you control over a single team.  You interact with other players in matches, and can chat with players live on the game’s homepage. Free agents are bid on actively between all “team owners”, which gives 90 Minute Fever an incredibly unique and active feel, something that modern sports simulators lack.

The game does have some massive drawbacks at this time, however.  The first is with teams and players being mostly imaginary or otherwise silly recreations of existing sports stars.  I found numerous 15-year old versions of soccer greats; some even had a Wikipedia link provided on the player page so you could learn about the real player, which is a nice touch.  For example, the names available mimic those of NBA point guard and expert Spanish ham salesman Jose Calderon, and recent multi-millionaire and member of the New York Jets Muhammad Wilkerson.

The problem isn’t necessarily the humorous nature of these names, rather other sports simulators typically provide licensed players in the games, and this gives you a nice sense of each player’s abilities, age, potential, and other needed information that the free-for-all player lists of 90 Minute Fever provides none of.  You’ll really have to spend some time getting an idea of who is good and who is who on your team, on the teams around you, and the with the free agents available.

The most visible drawback is with the in-game experiences themselves, though in this early stage it is only fair to assume this will improve greatly.  It will need to undergo more development to overcome the very stale and static experience it is today.  There are no moving parts, which means you are dependent on a play-by-play commentary which is little more than text with colored backgrounds designating the team referred to.

We don’t expect much with a sports simulator in terms of in-game display, but this is far too rudimentary and gives you no feedback on how the teams move, strategize, exploit, and suffer from weak spots.  Stats can only tell you so much about how the team operates, and visual output in the form of simple circles or squares designating the players and the ball would be appreciated.

A far more fatal issue is with the text based information throughout the game.  Everything is so scrambled up and hard to decipher that I felt overwhelmed and wanted to stop playing at times.  A casual soccer fan such as myself is going to have a lot of trouble knowing what the abbreviations for player positions, stats, and other various items are, and 90 Minute Fever doubles this issue by sort of cramming all of the information into a tight, jumbled space.

The page for setting lineups is likely the most cryptic looking page I’ve ever seen in a sports game, and a perfect example of the mess you’ll find unless you’re a developer of the game yourself, or someone who bleeds soccer.  This game is made for the latter admittedly, but a little bit of cleanup and clarification can acclimate casual fans as well.

90 Minute Fever is intriguing, with a ton of potential pushing it towards the true release date.  Quick paced, social, and a more competitive version of sports simulation game, 90 Minute Fever can be a great alternative to other games in the genre, but there are lots of quirks, design flaws, and rudimentary design elements that need to be worked out along the way before the release.