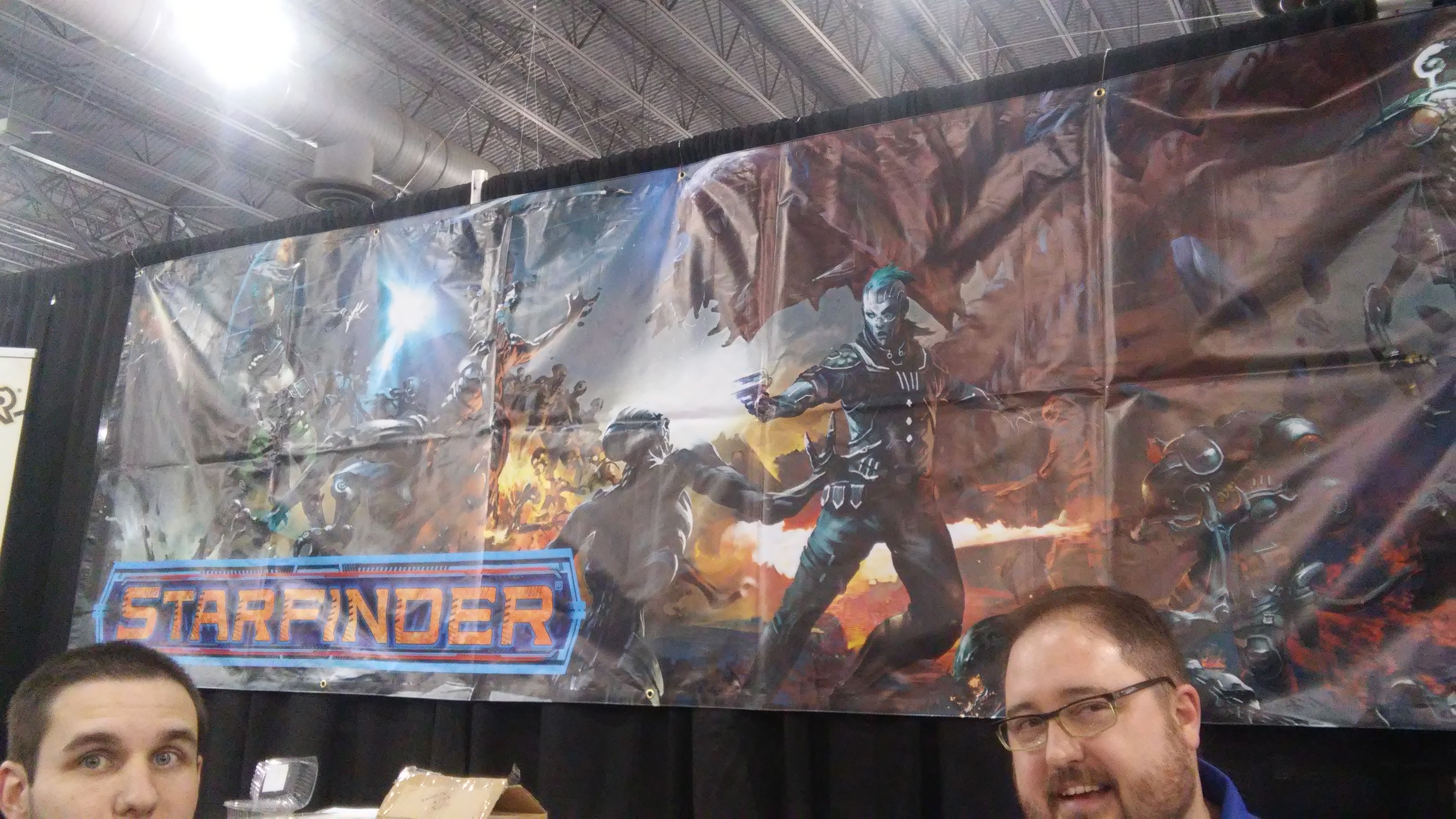 While Paizo will always support Pathfinder, Starfinder is its major focus at the moment, and its booth at the con was an array of demos for the game. I got a chance to sit down with Eric Mona, Publisher at Paizo, and talk about the launch, design, and future for this game, which is easily the fastest selling product in Paizo’s history.

Starfinder as a concept had been kicking around for a long time before it ever got finished. The real impetus behind its creation was a milestone for Pathfinder: its 100th adventure path finally released, to what was very little fanfare by Paizo’s standards. After more than a decade in the tabletop market, its core fans were starting to experience the burnout of a long-successful product. Paizo knew it needed something different to get people excited.

That thing needed some parameters, however. Paizo needed to bake the Golarion setting into the game, but keep it distinct. Because the most common tropes such as Klingons or Wookies are often proprietary, Paizo needed room to make its own way with the setting. Licensed games live or die by the will of the licensor, and generic sci-fi games do not have enough of a setting to inspire more than a particular group to the system.

Starfinder allowed Paizo to experiment with game mechanics, and inject the weird science fantasy ideas that had inspired the designers since they first encountered the Spelljammer setting. I did not get confirmation on whether the Isoki are nods to the space hamsters, but I know what I want to believe.

Because Starfinder was connected to Golarion, Paizo could respect the fans who had invested time and money into their products. While they were able to connect the two games thematically and mechanically, the Gap allowed them to prevent Pathfinder events from feeling pointless (and lead to unanswerable conundrums in the lore.) Because of this, and to give GMs the freedom to explore the mystery for themselves, Paizo has no intention of explaining the Gap. For now, the two games are able to exist as their own products, but the conversion rules further help you maximize the collection you already own.

As a new product, Paizo was also able to leverage things it had learned over the life of Pathfinder. For instance, Pathfinder had a beginner box later in its life to help new players understand the game, but Starfinder was specifically designed to be an easier entry point and not require such help to get new fans invested. The edict for Starfinder was that players of all skill levels could enjoy the game.

Another change came in the form of adventure design. Adventures will have Syrinscape support, giving them tailored sound sets, but new releases are also geared towards being useful for players and GM’s instead of one or the other. For example, Alien Archives just released as a monster manual, but it also contains rules to allow players to play as alien characters of those monsters. It not only makes the book more useful as a tool, but it helps enforce the science fiction setting, which would have a greater prevalence of strange races in the party.

The first adventure path was close to the core of the new galaxy, but the next one is designed to take us farther away into the unknown. Keep an eye on Paizo and right here at Gaming Trend for more coverage. Also make sure to take a look at the rest of our PAX coverage.