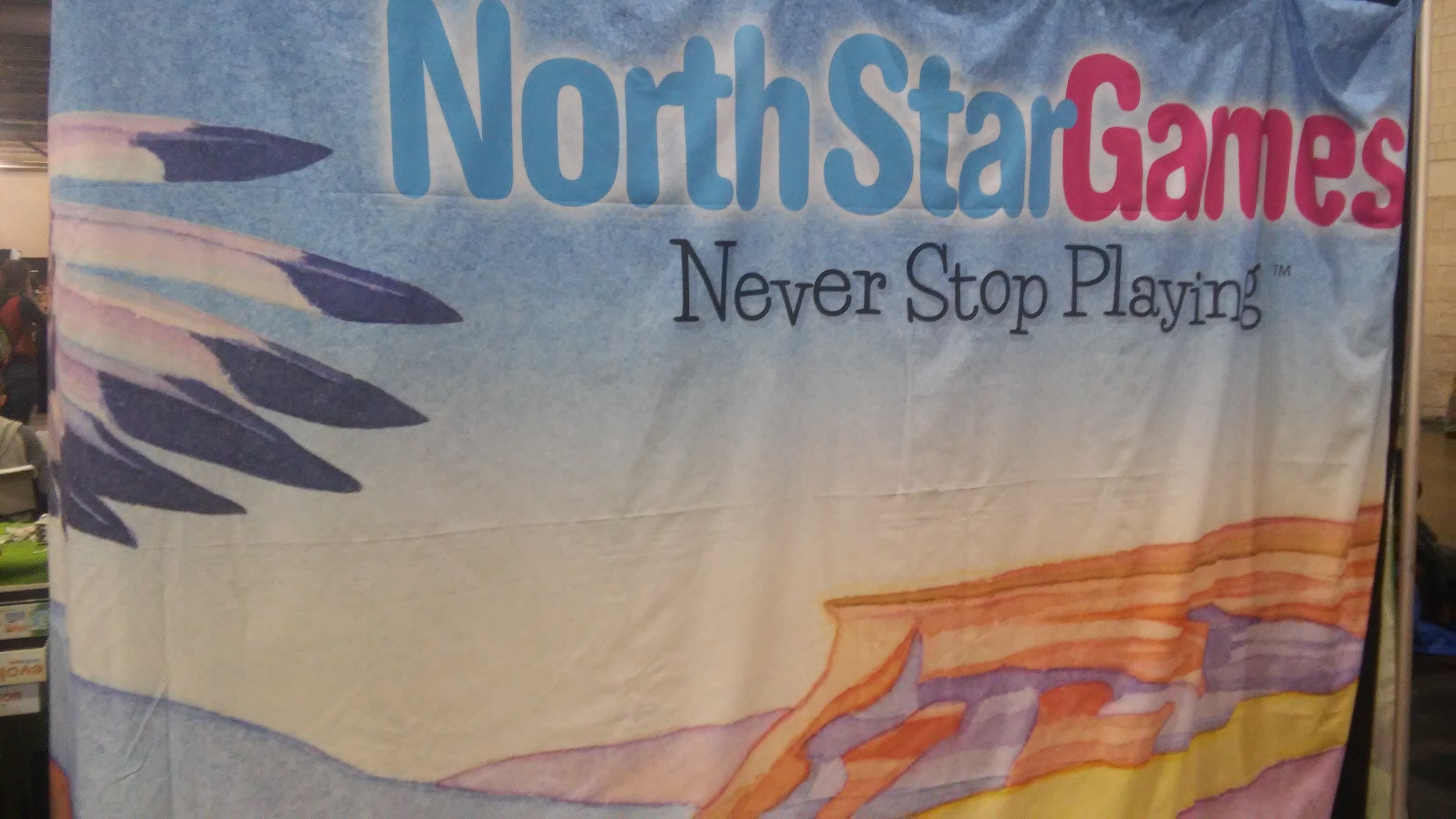 North Star Games has been a powerful force in the tabletop industry for a long time, and it shows no chance of stopping soon. With a history of successes and a strong listing of developing titles, its work bringing tabletop gaming to the forefront proves to be an ongoing mission that is only gaining momentum.

The same company has been behind party game successes Wits and Wagers and Say Anything, as well as the natural selection inspired strategy title Evolution, which is soon to see a new electronic adaptation. I got a look at many of its current titles, as well as a few projects in development that show a strong commitment to experimentation.

First and foremost is Happy Salmon, a game currently up for Toy of the Year and looking for votes if you want to support it. With four card types per player (high five, happy salmon, fist bump, and switch places) players attempt to run through their deck as fast as possible by matching the appropriate motion with someone who has the same prompt. The result is a frenetic, madcap game that distills fun into a minute of shouting, slapping, and laughter as you flail your way about the room.

Evolution has already been a strong product, pitting animal species against one another in a struggle for resources and forcing them to adapt to make it to future generations. The established game line is seeing expansions that take it into oceanic environments and changing climates. Evolution is also soon to have a video game adaptation, taking it to PC and mobile devices. I got a hands-on experience with the tablet version, as you can see here.

While it is in its early stages, the interface was already intuitive and readable, and only the beginning of the experience. The concept is simple at first, adding more difficulty as it continues. You begin as a single group of a species, trying to get enough food from the local environment to support yourselves, growing into larger groups and splitting into more diverse species to support one another. You will have to contend with opposing species who are vying for the same resources, and to help you along the way are traits to change how you play. These could include the ability to share food or eat it more efficiently as well as combat advantages pulled from more carnivorous species.

The final version will have a single-player campaign as well as pass and play for multiplayer on a single device and traditional multi-player. It will also include modular watering hole configurations to modify the game to different player counts.

For those of you interested in this version, keep an eye out for the Kickstarter in 2018. As a special bonus, certain backers will be able to work with the artists to create creatures amalgamated from different traits you can pick up during the game, to insert into the experience when players create those species.

Back to the party side of this equation, Wits and Wagers recently received its Vegas expansion, adding to the wagering aspect of the game. The basic game asks its players a series of obscure or absurd questions, granting points not only to correct answers but to those who later rely on that answer themselves. Using chips to help you gain points, you can place bets on different answers depending on your faith in their accuracy. A new feature allows you to bet instead on a specific person, if you happen to believe their expertise in an arcane area makes them more likely to generate a correct answer. I will be reviewing this product in depth very soon, for those of you wanting a more complete explanation.

I was also fortunate enough to meet with North Star before the event, and take a look at some of its projects still in development. Super Wits and Wagers places its players on teams against one another, heroes and villains, to try to best one another in the realm of questions too obscure to be used anywhere else. Each teammate has a special power to manipulate the board, helping you strategize and maximize your points. The speedster, for instance, can move to adjacent answers if they happen to be correct, while a dragon rider can smash all of the heroes in her location, negating their points should they land there. Add in ways to manipulate point totals and power up your teammates, and the cooperative strategy that develops engaged me on several levels. The Kickstarter is scheduled to launch May 7th, so make sure to keep a weather eye for the full campaign.

Lastly was Most Wanted, a western themed adaptation of poker that takes the wagering and odds but combines them with shootout style encounters. Two poker decks containing only 7-Aces get shuffled together, and you attempt to make the best hand while challenging your opponents to various styles of shootout. You can challenge one person to the best two cards, everyone to best three, or everyone and the deck to best five. Along the way are ways to manipulate your hand so you can build up for a single, game-changing point grab, but only if you play the odds correctly. Most Wanted is the furthest from completion, so you will have to wait to see any firm announcements on this title.

I will be covering many of these games in greater depth shortly including full reviews of some of the products I mentioned, so make sure to stay tuned for more information. Otherwise, you can check out North Star Games directly, and swing over to the Toy of the Year Voting to check out the competition.