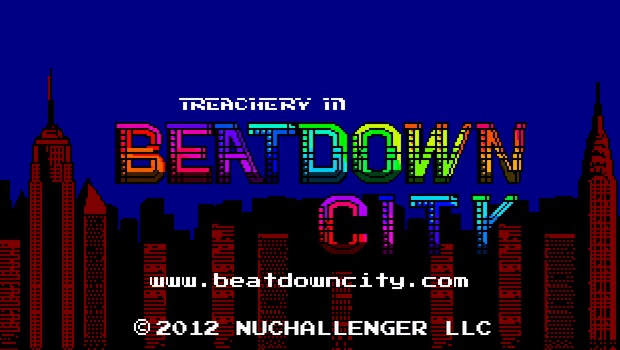 The Ninja Dragon terrorist organization has taken credit for kidnapping the President during his recent trip to the UN summit in East Fulton, and demands a $1 trillion ransom for his return. Corrupt East Fulton Mayor Mike Moneybags refuses to investigate unless he can bag billions in kickbacks from the federal government. Out of options, police chief Antonio Santiago asks his daughter and two friends to look into the situation. This is the premise behind the beat ‘em up Treachery in Beatdown City, developed by Nuchallenger and currently on Kickstarter.

Shawn Alexander Allen, founder of Nuchallenger, explains that Treachery in Beatdown City is not just your average brawler. “It’s sort of complex,” he says of the title’s genre. “I usually say it’s a beat ’em up with RPG and tactics elements. Or like Double Dragon Meets Fallout III. I realize the term RPG requires some past knowledge, but I’m ok with being somewhat obtuse.”

The beat em’ up elements are obvious, but the addition of RPG-inspired menu-based combat and the seamless switching between the three protagonists makes this game unique. The Kickstarter page explains:

Each of the player characters has his or her strengths and weaknesses against every enemy in the game. Switching can be done on the overworld with the press of a button, and strategic use of each character’s strengths can make a fight that would usually be very difficult much easier.

Allen reports that Treachery in Beatdown City draws on a number of sources for inspiration, saying, “Besides Double Dragon and Fallout III, I’d say there are numerous games in the RPG/tactics/beat ’em up/fighting genres that all lent something toward the creation of this game.”

The stars of the game are Lisa Santiago, Bruce Maxwell, and Brad “The Bull Killer” Steele. They each have their own personality and fighting style. Lisa “focuses on boxing and mma, with a mix of holds and brutal kicks/punches”, Bruce uses “a mix of Jeet Kune Do and Capoeira filled with lightning fast punches and acrobatic kicks”, and Brad “is the heavyweight character fighting with high powered wrestling throws and heavy strikes.”

In addition to different fighting styles, the characters also hail from different cultural backgrounds, packing a surprising amount of diversity into the game’s three person cast. When asked whether this was a conscious decision, Allen answers, “Yes and no.”

“For me, it’s normal. I feel most out of place when there aren’t a vast amount of people around. I grew up in New York City, and went to a specialized high school with 5000 kids, of which probably everyone was represented. My first global game jam game was worked on by a very diverse cast too, and I used to work at EB games with a group of people from different backgrounds,” he explains. “It just feels most natural that way.”

On a related note, Allen believes that having more racial and gender diversity among developers and designers can “absolutely” help address the lack of diversity in games. “When I am not neck deep in my game, I’m out trying to meet and encourage different types of people to make games, and I also speak out at conferences about this,” he says. “I spoke about it at IndieCade, New York Games Conference, and IndieCade East to an extent and will be at GDC/Pax East speaking about it as well.”

“I don’t think it’s fair to say that every person who counts as some minority group should only make a game about themselves, but if we have more people seeing themselves as worthy of inclusion instead of a cute penguin, or some default blonde haired white guy we might just see that happening.”

Including a diverse cast might not have been difficult for Nuchallenger, but unfortunately not all of the development process has been so easy. “We’ve faced numerous challenges as a small team both directly related to development and around it. The sheer amount of animation that I have to complete by myself is one,” Allen explains. “I definitely underestimated having 26 unique enemies with different stats and abilities. Another is just getting everything working right with all of the enemies and players, as well as finding the right balance for everything.”

The game’s 26 enemies all “look different, walk differently and all have their own unique ways of attacking” according to Treachery in Beatdown City’s Kickstarter page. When you add in the protagonists’ attacks, level art, and “classic frame by frame cutscenes”, it certainly does sound like a lot of work.

“Then there are the less tangible things,” Allen continues. “The first month we started on the SDK we’re using, Hurricane Sandy hit [and knocked] out our power for a week. Both the programmer Manny and the composer Inverse Phase have found themselves displaced from their house[s] to some degree because of various circumstances. Recently my wife Diana‘s sister’s brother in law died, and a week later Diana’s grandmother died, a person who I knew better than my own grandmother.”

“Also Manny lives in kind of a terrible building where the power flickers, the internet lines get ripped out and he gets harassed by police and junkies… and this is just a few blocks from where I live,“ he adds. “And this is all while trying to hit dates, get music done and get art done leading up to this Kickstarter.”

Despite these unfortunate circumstances, Allen remains confident about the game. “We’ve been working on the basic fighting systems, and figuring out the interlocking parts and class based enemies over the last year so far, and I think worst case scenario we have another year out.”

The Kickstarter is still short of its funding goal with just a few days left, but according to Allen it doesn’t mean the end of Treachery in Beatdown City. “Until the middle/end of April we’re pretty booked up with GDC, Pax East and the like coming up,” he says. “We’re really trying just to focus one step at a time, and we’re going to be demoing a ton in the next coming months.”

Nuchallenger is even interested in bringing the game to the PS4 and Vita someday.  When asked why they’re interested in those particular platforms, Allen explains, “I still love the idea of consoles. I own a Vita and love it very much as a handheld (and would even consider 3DS too as I love that one as well). The cross buy/play options offered on the PS4/Vita are a big factor why, as well as the PS4 being a very developer friendly system.”

One of the things that keeps Nuchallenger hard at work has been the response from fans. “People love the way the game looks, and many of them have played it at events. We’re very thankful for all of the myriad of backers we have, which spans new fans to industry celebs. It’s very encouraging,” Allen concludes.

For more on Treachery in Beatdown City, check out the Kickstarter page here, the game’s official website here, and Nuchallenger’s website here. You can also have a look at 30 minutes of gameplay in the video below.