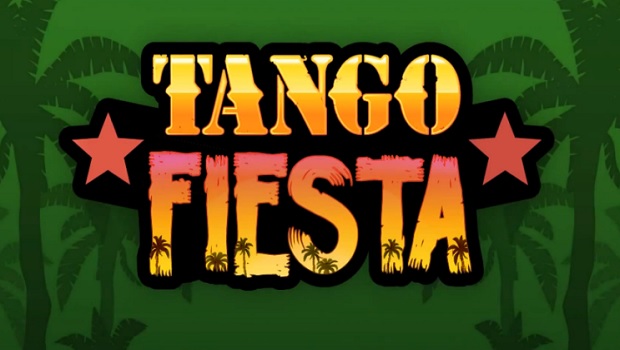 Unlike most of my colleagues here at Gaming Trend, the 80’s were a bit before my time. My knowledge of the decade comes entirely from secondhand experience via the films, TV shows, and games of the era. But that’s okay; you don’t need to have grown up in the 80’s to recognize the appeal of those often ridiculously over the top action movies. In fact, game designer Andrew Smith of Spilt Milk Studios is counting on their appeal with his 80’s action inspired roguelike shooter, Tango Fiesta.

According to Smith, “Tango Fiesta is the true story (as we see it) behind the greatest 80’s action movie ever made, brought to life in a fast-paced 4 player cooperative roguelike shooter for PC and Mac.” The game was born in 8 hours at last year’s Rezzed game jam, where Smith tells me the designated 80’s theme lined up perfectly with the team’s interests and the title arose from another lucky coincidence.

“When we arrived in Birmingham the night before the jam itself, we went for dinner at a restaurant called Fiesta Del Asado, who hosted a Tango class. We decided whatever the jam theme turned out to be, we would name our entry Tango Fiesta,” he explains. “Then the next morning, when the 1980’s were chosen as a theme and we decided on that scene in Predator as the basis for our game… well it all just seemed too good to be true!”

But even with a stroke of luck like that on your side, 8 hours isn’t very long to build a game. The simplicity of the initial build of Tango Fiesta shown in the screenshot above matches the circumstances of its creation. “The original jam version was pretty much just a single screen, 4 player local co-op shooter with 2 basic enemy types and a high score counter,” Smith recalls. “Everything was placeholder and rushed to completion with the 8 hours that we were given.”

Still, the concept was there and the Spilt Milk team saw it as worth working on. At first, they added features in dedicated bursts of effort similar to the jam format the game was created in: “We did a couple more private jams on the game, working in powerups, vehicles and more levels… but all to the same ‘jam’ quality,” Smith says. “Tasty, but not as satisfying.”

Eventually, they realized Tango Fiesta could be something much more. Since then, the team has dedicated serious time to improving the game from the ground up. “We’ve been working on the game for about 4 weeks now, rewriting everything from scratch – which in itself was a very sensible (but quite tough) decision,” he tells me. “The quality has risen hugely because of the time we’re able to invest in getting things just right – including animations, particle effects, player and AI-controlled characters, bosses, and incidental environmental touches too.”

When comparing the original build to the current one Smith says that “the biggest change is with the visuals.” According to him, screenshots like the one below are “very indicative” of the game’s current look, as it exclusively features in-game assets.

All in all, the game has come very far in the last year. “The current build – the one I’m able to play while I write this – is so far advanced from that initial model it’s crazy. We have 4 player local co-op still, but we’ve got 4 different player characters all with individual stats. There are over 8 weapons in the game from a humble pistol, to a submachine gun, and a flame thrower – even a full-on rocket launcher,” Smith explains. “Levels now generate themselves so each playthrough is different, and they scroll over multiple screens of action. We’ve introduced cover, destroyable buildings, explosive barrels (a cliche, but the 80’s invented them) and the player can both melee attack and throw grenades without breaking a sweat.”

Getting Tango Fiesta to this point hasn’t been without difficulty, though. “We’ve certainly had some hiccups,” Smith admits. “Every game’s development is defined by how you overcome these challenges, and it’s certainly a learning curve, but we’re taking a very calm and collected attitude.”

Spilt Milk makes the most of their small team by focusing on one area of Tango Fiesta at a time. “Each week we separate a key element of the game, and work solely on that,” Smith  says. “So the first week was spent primarily on getting the player character feeling right to play. Setting up physics and interactions, opening up stats and tweaking so that even just running around with nothing to do felt good. The second week was focused on weapons, and the third was to do with level generation.”

“This feature-by-feature approach means we don’t get bogged down in details, we don’t lose sight of what’s important, and we work more effectively towards the same goals as a team. I think Valve use a similar method, using cabals of art/design/code/audio to focus on one aspect in real detail… but we’re so small we’ve only got one cabal available!”

Despite steady progress so far, Smith wonders if the hardest part of development is yet to come. “I’m still dreading the week we first tackle online play; we proved it at a very basic level with one of our jam versions of the game so I have confidence we’ll manage it, but it’s still a big chunk of work that has a lot of potential knock on effects on other areas of the game,” he says.

The team has made sure all of their goals for Tango Fiesta are attainable though, and advise other indie developers to do the same. “There are so many tools, people and opportunities these days, there’s no excuse not to just start on something… but do make sure it’s achievable because nothing hurts a game’s chances more than poorly scoped features. Don’t start your dev career making an MMO or a DOTA clone,” Smith suggests.

For other indie developers looking to bring their game ideas to life, he encourages them to stick at it. “Just find a way to make it happen,” he suggests. “We were quite lucky to be part of a high-profile jam, and the game’s reception there gave us the self belief and confidence needed to keep moving the project forward. But you just have to get your game idea ready to be played, and then get people playing it. It’s the best way to learn, to react, and to build success.”

When it comes to getting those ideas out there, Smith says the game jam format is “perfect for it.” He explains, “You don’t have time to overanalyze or question decisions, everything is decided from gut instinct and all focus is geared towards getting the game running, and making it fun! I can’t think of a better way to get that first spark ignited… but of course full game development is very different and lots of other factors come in to play that don’t in the jams. It’s like a snowglobe full of creative energy that is fragile and needs to be held dear.”

According to Smith, response to Tango Fiesta has been “so far, so good”, and he’s looking forward to more people having a chance to play it. “The original jam version went down really well at Rezzed and everywhere we’ve let people play it since – the sense of humor and fun seems to come through every time and it’s a great foundation to build on. Everyone instantly gets the appeal of the game’s setting, the way we’re approaching our portrayal of all those great 1980’s action films, and we just can’t wait to let people get their hands on it.”

Interested gamers across the pond will have a chance to play it for themselves later this month. “We’ve actually got the first public hands-on at EGX Rezzed in Birmingham at the end of March, the place where it all started! We’ve two very small appearances before then so I’m very eager to see how all our hard work goes down with other players- that’s the true test!”

Even now, though, Smith is optimistic about the game’s prospects. When asked where he thinks Tango Fiesta will be a year from now, his forecast is positive. “With luck we’ll have been out on Steam in one form or another for about 8 months, and we’ll have attracted a dedicated fanbase who play every day, help us choose what new content to release, and contribute their own work to the game via our planned Steam Workshop support,” he predicts.

According to him, fans will play an important role in determining exactly what content gets added, but there will be plenty of it regardless. “The game has so much potential to really last – there are so many great movies to take inspiration from, characters to reference and classic scenes to riff on that I can’t honestly say we’ll ever be finished,” he says.

“But as long as players are happy, we’ll be happy. I keep saying to the team that while we know what we’d like to add post Early Access release, it will really be down to the fans to tell us what they want. I can’t wait to find out!”

I can’t wait to find out either. For more details on Tango Fiesta, you can check out the game’s website here and follow Spilt Milk’s development diary here.