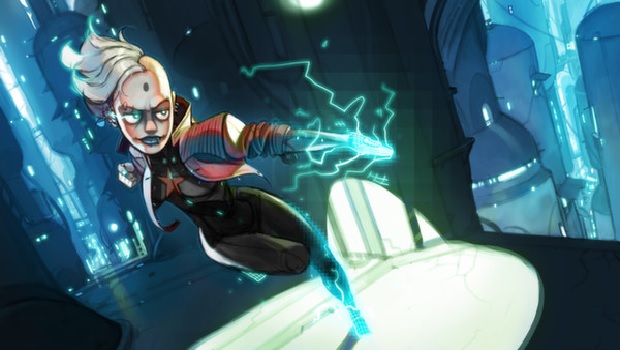 When is the last time you enjoyed playing a game, but thought you might have an idea to improve it? Well for thousands of gamers, that day came some time last week. Spearhead Games, developer of physics-based puzzle title Tiny Brains, is inviting gamers to take part in developing their newest endeavor Project Cyber. The team views the project as an experiment in communal development, and is hoping you’ll come along for the ride.

Spearhead Games has come up with a general idea for the game: “[Project Cyber] is a cyberpunk team [based] competitive game set in a futuristic world in which people’s power and status is determined by their degree of social influence – these men and women vie for supporters in an enormous sports arena,” Spearhead Games co-founder Simon Darveau explains. “The better they perform in the 3-vs-3 soccer-inspired game, the more influence they gain, and the more influence they gain, the better they will perform.”

Darveau tells me there are also plans to extend gameplay beyond the game world itself. “We’re working on building a way for spectators’ votes to have an impact on the game, such as choosing epic special events (earthquake, storm) that happen during a match,” he says. “This will hopefully make spectatorship feel more fun and interactive (closer to a live sport than an eSport), as well as encourage players to get their friends involved.”

So the framework for Project Cyber is there, but Spearhead Games hopes that the details will be decided by fans. According to Darveau, “Project Cyber is hoping to break ground in the realm of game creation by taking communal development to a whole new level – this will be a game made for our community, by our community.”

Steam Early Access and similar “paid alpha” programs have already given gamers a glimpse of what it is like to be involved in the development process, but Spearhead hopes to take this a step further. When asked if the making of Project Cyber will really be completely open to the community, Darveau answers with an enthusiastic “Yes!”

“We are going to be publicizing 100 percent of the development process, complete with nightly streams in which we request feedback from our community and weekly competitive sessions to see how gameplay is coming along, to make sure that our community gets a chance to actively participate in every step forward that this game takes.” This participation will include allowing fans to put forwards their own ideas for the game, and putting key parts of the game up to a vote.

“We’ll also have forums open on Steam for the entirety of the process, and will be reading and vetting every comment to see if there are any promising ideas,” Darveau continues. “For things like the name of the game, the story and new characters, we will choose the best ideas from the forums and put them to our community for a vote.”

While there are some limits to what the community can change, they are relatively few. While Darveau says the team is “fairly set” on the general framework of the game, he is quick to add, “Most of our ideas are flexible.” What few restrictions exist are somewhat necessitated by the tight timeline of the project; Spearhead Games hopes to complete Project Cyber in just three months.

“It would be impossible to develop a game in three months if the fundamental structure changed once a week,” Darveau admits. “Everything within that, though – characters, gameplay dynamics, dynamic arena events, etc. – is open to feedback.”

But it’s tough enough to make a game in 90 days as is; having to take hundreds of extra opinions into account won’t make it any easier. It is really possible to have a fun, playable game ready in such a short timeframe? “We hope so!” Darveau answers. “We know it’s ambitious [and] we’re a little nervous! But we already have a (very basic) working demo with functional physics and powers, and already playable online, so as long as we keep at it day and night, we should have something good by the end of three months.”

As for making sure that the voice of the community is heard over the course of those three months, Darveau tells me, “We’re fairly self-motivated here: we want to make a game that our community will love, and the best way to do that is to let them tell us exactly what they want to see and then incorporate that.”

“We’ll have open forums on Steam, we’ll be noting down the best ideas from the Twitch chat, and fans with longer form ideas are welcome to reach out to us directly via email – we will read everything we receive,” he assures.

So why go with a communal development strategy when it would probably be easier to develop Project Cyber independently behind closed doors? According to Darveau, Spearhead’s approach is a practical one.

“We think it’s sort of silly that game criticism always happens after a game is published – after all, it’s fairly useless to be told that a given mechanic should be tweaked or that the game felt imbalanced in a given direction when it’s too late to change anything!” he says. “Opening up development means that people can give us ideas that we can actually incorporate, allowing us to make the best game possible.”

Project Cyber may be one of the first titles to take this approach, but Darveau believes more community-based development is “definitely” coming in the future. “We think it’s just a few years off, but figured why not start now? Social media and technology allow developers to have a direct line to people who play their games. Why not use it?” he asks.

He continues, “That said, I think that in more narrative-driven games, community-based development could be detrimental (imagine Twitch Plays Pokemon trying to sketch out the plot of the next The Last of Us – not very practical), but for more freeform gameplay-based endeavors like our own, I think it’s going to get more and more popular.”

Speaking of popularity, thousands of players have already joined in to help craft Project Cyber. Interested gamers can sign up for a free Steam key to play along as the progress unfolds, although Darveau clarifies that as of right now “this game is a two-week-old baby! It doesn’t have sound yet, it’s buggy, and it’s definitely in its early stages.”

That doesn’t stop Darveau and the rest of the Spearhead Games team from being enthusiastic about Project Cyber. “We’re so excited to see what comes out of this! The thrilling thing about communal development is that even the developers don’t know what the final product will look like,” he says. “This game could go in a hundred different directions, and we can’t wait to see which ones you all choose.”

Got some ideas already? Darveau explains how you can get involved: “We want people to share any feedback they have with us on our Twitch stream at 7pm Eastern on weekdays, on our Steam forum, and on Twitter @SpearheadMtl with the hashtag #ProjectCyber.”