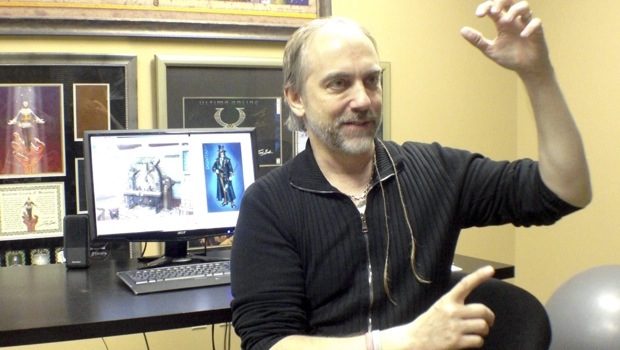 Richard Garriott is a character from a video game. No, really, he is; Under the guise of Lord British he oversaw the realm of Britannia in Origin’s legendary Ultima series, and as Garriott himself states, he came there from Earth. Our Earth. Some game creators say games are their life, but with Richard Garriott, his real life and his game life were literally one and the same for nearly two decades; He was Dungeon Master to millions, and as the millennium came and went, he left his beloved realm with a bang and ascended into new worlds of game exploration and even space itself. But for the last few years, Britannia Manor (his palatial castle in Austin, Texas) has been quiet, and while Garriott co-founded a new game studio- Portalarium- its focus seemed to be on mobile and social games; not exactly the kind of games you’d expect to see Lord British pop through a moongate into.

Of course all that changed with the launch of the Shroud of the Avatar Kickstarter campaign; Lord British is back to bring the ‘role-playing’ back into RPGs, and Shroud is intended to be the spiritual successor to Ultima. We got invited to the Portalarium offices to chat with Mr. Garriott during SXSW, and he expanded on what their plans were for the game, as well as waxing nostalgic on his storied past and revealing the connection between Star Wars Galaxies and Wing Commander:

Before we sat down to talk, however, he gave us a quick tour of Portalarium’s modest accommodations. The sheer amount of Ultima memorabilia decking these walls is enough to make a Dragon swoon, and the framed rolls of ticker tape he programmed his first games on held the gravitas of a gaming heritage long forgotten.

The sky is the limit

As of this writing, Shroud of the Avatar is happening- they passed their 1 million mark with eighteen days to go; Stretch goals are slowly being revealed, acclaimed fantasy author Tracy Hickman has come on board (effectively buffing the whole production’s old-school RPG cred exponentially) and it seems that the fun is about to start. The last year has brought Kickstarter campaigns from so many founding fathers of the gaming industry, people who literally shaped this wonderful hobby of ours, yet Lord British’s Shroud of the Avatar: Forsaken Virtues stands alone. Why? Because Richard Garriott wants to play this game even worse than you do.