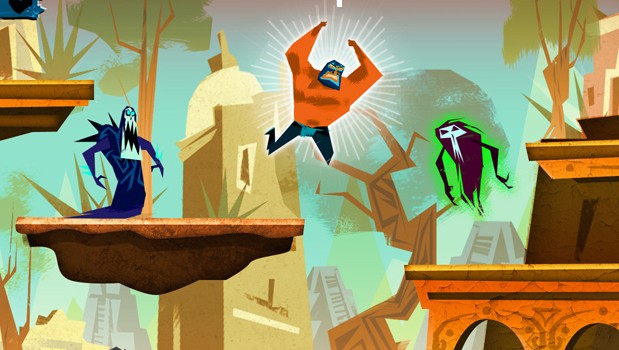 Guacamelee! was a surprise hit when it launched at the beginning of April, combining Metroidvania-style platforming and exploration, God of War-style combos, and a dash of Super Meat Boy-esque difficulty. As someone who thought incredibly highly of the game, I wanted to find out more about the process behind its development. So I tracked down Chris McQuinn and David Rusak, designers over at Drinkbox Studios, so they could shed some light on its Mexican roots, how they balanced two-player co-op, and more.

How did Drinkbox Studios come about? Where did the name come from?

[Chris McQuinn, Designer] Drinkbox Studios formed after the closure of a larger studio called Pseudo Interactive. At the time there were not many options for game development in Toronto so the three founders made the studio. As for the name – I believe it came to somebody in a dream. Maybe a nightmare.

Where did the inspiration for Guacamelee come from? Why a Metroidvania-style platformer?

What about Mexican pop culture or lore appealed so much to you guys that you chose it as the setting for your game? The last few games have been about alien invasions — what made you decide on the luchadors and the Day of the Dead?

[David Rusak, designer] The setting, characters and story arc of the game were the brainchild of our animator Augusto, who was born and raised in Mexico. Doing a cartoony homage to luchadors and Mexican culture in general really lent itself well to the kind of fun, colourful style we tend to go for, and it’s also something you just don’t see much of in games, so this was right up our alley.

That aesthetics are fantastic — what inspired those stark colors and angular features?

[CM] Our art team of Steph Goulet, Augusto Quijano and Ben Thomas are responsible for all of the Guacamelee! stark colour angular awesomeness.

How long did development take — from inception to completion?

[DR] About two years, the first year or so of which it was largely on the backburner.

What difficulties lie in crafting an interconnected Metroidvania style world? What did it take to craft the world map?

[DR] Making a world really feel ‘open,’ especially when you’re a small studio with limited resources, can be a big challenge. The more routes the player can take, the more the work you have to do explodes, because all of those routes have to make equal sense and not break the game or its storyline. So we were pretty careful to gate the player’s movement through the world based on the powers they’ve earned, while still throwing in lots of secrets and areas that branch off from that main path for you to find.

Was it difficult to add a second player to the mix? Was it always part of the design to have two players or was that added in later?

[DR] Setting up the whole game to support two players introduced plenty of complications, but the joy of playing skeleton-catch with a partner more than makes up for it. When it came to calibrating the difficulty for co-op mode — I think our policy, and a good general rule for a game that wants to be accessible, was to err on the side of being a little forgiving. If two people want to enjoy this game together, and they have any difference in skill or familiarity, the last thing you want is for it to be more frustrating for them to play together than for one person to just quit and leave.

How did you decide what references to add into the game? Were there some that were left on the cutting room floor?

[DR] Well, we just had to completely scrap the KeyboardCat-Ville expansion pack…

Was there any gameplay mechanics, concepts, locations, or characters you had to cut?

[DR] There’s one or two things you might yet see in some upcoming DLC!

One of the few criticisms about Guacamelee is its length — though I personally feel that it’s long enough without overstaying its welcome. Did the game’s ultimate length come up during development? Did you feel it was too short or just right?

[DR] I think it’s safe to describe game development as a constant battle between your ambitions and your resources. So this was naturally a concern throughout. In the end, I’m happy with the overall length too, but you’ll always have more ideas than you can stuff in. We’ve also worked to add replayability with trophies, leaderboards and Hard mode, as well as with the new content on its way.

What was it like working with Sony? How did you get the publishing deal with them? Did they request any changes to your design or were you largely left alone?

[CM] Just to clarify – we have never had a publishing deal with Sony – we were part of Sony’s Pub Fund program. All of the funds to make Guacamelee! were scrounged up by us. With that said – Sony does a fantastic job of providing feedback when we want it, and letting us make the game we want.

Sony’s “Cross” marketing is an interesting feature that adds value beyond things like gameplay features — I’ll be honest, I my time in Guacamelee was split evenly between Vita and PS3. Was it difficult to make it work on both systems equally as well? How do you feel about “Cross-buy?”

[DR] I think this is a really cool kind of feature to be able to offer our players. Getting everything working equally well on two systems with different control schemes and performance levels definitely added a hunk of extra work to the development process — but it’s cool now to hear from people like yourself who’ve enjoyed it both in the living room and while out and about.

What do you think about the current state of the industry? Do AAA games and Indie games both have a place in the market?

Any details you can give us about your next project?

[CM] I’d love to give you details for our next project – but we’re not even too sure ourselves. What I can say is that we’re currently experimenting with some interesting ideas. :)

Last question, and please, be honest: did anyone wear luchador masks or tights during the development of the game?

[DR] There’s a mask around the office that’s been on various things and people. I do my best not to speculate on whether anyone’s been wearing tights.