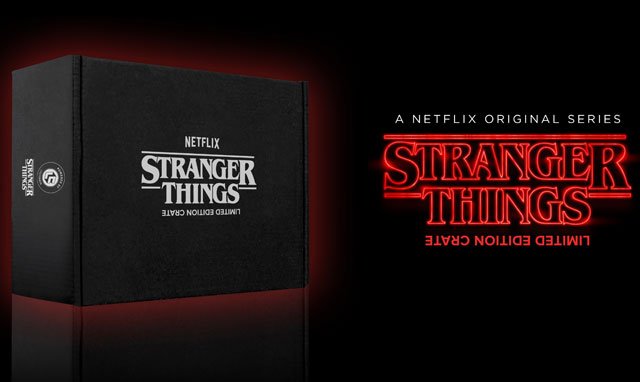 For many years, official merchandise tended to be drab, uninspired affair. A logo or a popular character centered on a t-shirt, shouting brand loyalty without offering so much as a whisper of creativity, imagination, or style. Loot Crate exploded onto the scene in 2012, bringing fans merchandise and all kinds of unique, often fan-created apparel. Today, it finds itself at the forefront of geek culture, its blindboxes bringing a myriad of properties exclusive collectables, licensing fan art, and restructuring both how fans collect and how companies license their properties.

I sat down amongst the hustle and bustle of the E3 show floor with Erik Reynolds, the corporate communications director for Loot Crate, to talk about the newly announced Stranger Things box, Fallout Crate, as well as the past and future of the company. With the Fallout Crate announcement practically still ringing in my ears, I opened by asking what more Reynolds could share.

“Not a lot yet,” he admitted with a smile and a shrug, “because it is a mystery crate. The Fallout crate is going be bi-monthly, and it’s basically going to reach deep into the Fallout universe, across every single game that’s ever been released, and every piece of DLC that’s ever been released. We’re going to bring you really deep cuts of those favorite moments and favorite games, delivered right to your doorstep.”

Product shots from the Fallout limited addition crate, Loot Crate is being tight lipped about what will be in the new Fallout Crate!

Diving deep into fandom is great, but given how little information we have as to what to expect from the box itself, I pressed for more. How meta is this going to go, are we going to be stocking our pantries with Fallout branded cans of baked beans or rations?

After a healthy laugh, Reynolds shook his head. “We’ve come a long way since shipping perishables, so not right now, but who knows? We may need fallout rations any minute now. What you will be getting everything from high end collectables to apparel; everything that you would expect from Loot Crate.

“Something you should know is that Loot Crate is getting more and more into designing and manufacturing its own collectables. We’re working with Bethesda to make sure that you’re going to be getting collectable Fallout figures in your Fallout Crate that you won’t be able to get anywhere else. And they’re not gonna be some of the characters you may expect. We’re going to reach really deep into the game.

“This is so exciting to me because Fallout is such a cornerstone of our industry. It’s always a huge event wherever there’s a new game, whether it’s Fallout 4 or the new VR experience, it always creates a huge seismic moment in the industry, so we couldn’t be more happy to partner with Bethesda on this.”

Reynolds was clearly excited about Fallout Crate, but Loot Crate has many other irons in the fire, including the recently announced Stranger Things box. “The Stranger Things crate will be a one time, limited edition crate which is coming out right after the new season premieres. Working on this has been amazing, one of the biggest moments of my career. I found out that David Harbour, who plays the Sheriff, is a Looter! We couldn’t be more thrilled to work with the cast and get the products and just to get a Stranger Things crate into the world.”

At this point in the interview I realize that I just keep coming back to food, but I just can’t help myself, I have to ask the burning question: Eggo Waffles? Reynolds again laughs. “Oh my gosh, it would be so awesome to get waffles in there. I think we can figure out a way to do it.”

I wanted to learn more about how Loot Crate gets its merchandise and apparel, especially as the focus shifts more towards manufacturing it themselves. Do companies require that they work only with their creative team, or are they generally given the freedom to tap artists and designers they know, or even the fan art community itself?

“We do both! What I get really excited about is that everything from our Stranger Things t-shirt, that was in last month’s Loot Crate, to a lot of the unique designs of our figures are actually artists that we’ve discovered within the communities. We’ve been able to elevate them to the licensors and say, ‘hey, look at this person who loves your stuff, they wanna make something really unique and very different for us, is that cool?’

“We’ve been really blessed that our licensors see the value of these folks. It’s really lucky because sometimes, official just has to be official. This kind of fan infusion is really great because it just adds a different aesthetic to your brand. You sometimes find a point of view that you may have never considered.

“We’re working with all kinds of artists. We’ve got some upcoming stuff with Hasbro and Transformers, they pointed us to an artist that has been working with them since generation one, and is very much a genuine Hasbro artist. At the same time, we’re finding new and passionate people. We’re kind of bringing fan artists even closer to their passions, as well. For example, we found a gentleman in Chicago who has been designing his own larger-than-life WWE figurines for a long time. We loved his designs and wanted to make them official, so we got WWE’s approval, and how he’s sculpted and we’ve manufactured his figures. So now instead of something unlicenced, he’s part of WWE’s world.”

So, how can the talented artists who dream of seeing their fan art promoted to official, licensed merch get their work on your radar? According to Reynolds, there’s no need to spam anyone’s email with samples. “We celebrate fan content, so if you tweet at us, or post to our Facebook, we’re going to see it. If it’s cool, if it celebrates the essence of something that we all love, then we’re gonna absolutely retweet that, and our folks who work on creating products will absolutely chase down some really unique folks to bring that to products.”

Loot Crate’s trend of helping fan artists connect with intellectual property owners fits in nicely with Reynold’s personal dream for the company as he hopes to see Loot Crate become the number one place to find licenced merchandise and apparel. “If Loot Crate could be the hub for which all fan content, from fan films to fan speculations about shows and movies, to any kind of fan expression, I want to be that some day. If we could be that trusted partner to IP where folks like Netflix looked to us and said, ‘what do fans truly think about Stranger Things, or of X-Men?’ If we could show them the vast amount of artwork and fan films one day… that would make me very happy.”

Lofty and rather noble dreams! As our time was running out, I asked for any tips or suggestions as to how fans can best enjoy Loot Crate. “If you want more, you can always add on a Loot Socks subscription and get some pretty cool socks. That’s how I got mine,” Reynolds explained, tugging at his pant leg to reveal a burst of color from just below the hem. “They’re Metroid, I like them.”