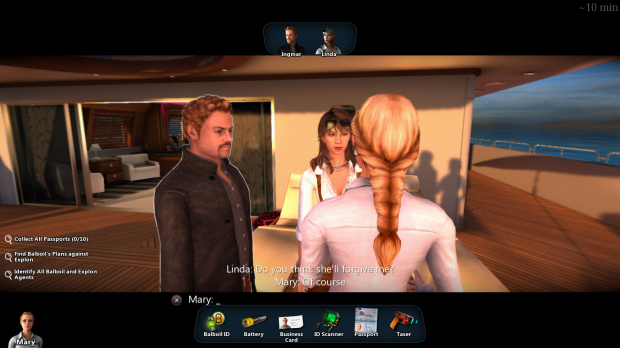 The following is an interview with Tribe Studios regarding their increasingly popular Velvet Sundown.

If you don’t care, give us a bit of an introduction to your studio. How large are you, when were you founded, who founded, etc.

Tribe Studios was founded towards the end of 2010. The size of the studio has been fluctuating between 6 and 10; currently we are 7. The five founding members have all been working many years in other studios before founding Tribe and the combined experience exceeds 60 years in the gaming industry.

Describe the pitch for Velvet Sundown. What were some of the key elements of the game you’ve pushed for during development?

Velvet Sundown is a multiplayer story game, where players take on the characters of the story. It consists of several 30-45 minutes long scenarios that all take place on a luxury yacht setting. Since the start there has been iterations on the gameplay mechanics and how we are building the storylines, but some core elements have stayed the same: the game is a social shared story, it has immersive 3D graphics and it can be enjoyed in ~1 hour intervals.

Would you say Velvet Sundown is still in development?

Yes, we are definitely developing it forward. Some of the key areas we work on are more content, more ways to group up with people and changing the payment scheme for the premium content. And those who have now subscribed will certainly get their money’s worth in whatever the new scheme will be.

We are releasing the next scenario soon and we hope to keep developing them on a continuous basis. However I can’t make a hard promise for the amount of scenarios available in next six months because it all depends on the amount of people we can have working on that. Not that it requires many man-weeks to do a scenario, but in a small team you have a lot to juggle in prioritizing things.

Subscription seemed like the obvious choice partly due to the cost structure of running the service, however as I just mentioned, we are going to diversify for other optional payment schemes than a subscription. In either case the premium purchases give you an instant access to all the scenarios and they can be played with larger player counts. Also it is a lot less likely for people to misbehave or go AFK in the middle of the scenario in the premium games.

How difficult was it to find a good text-to-voice translator?

This was somewhat just luck. Our CTO found the Acapela service and wanted to test it out. Once we played the first game with the voices we all laughed so hard we were totally sold to the idea of using text-to-voice. It was not in the original plan to have this feature.

Do you plan on implementing a voice-to-text-to-voice translator? Essentially meaning the player could speak a sentence, then seconds later hear the character in-game repeat after him.

This is something we have been thinking about. There are also voice modulators that can do a decent job changing your voice to sound like someone else. The Voice-to-Text accuracy still seems to be little off. So one option might be to do a version where everyone talks and the voices get changed for the character’s voices, and no one would be typing. But this is not anything we are actively working on, just future possibilities.

How many characters are in the game and will more be added? If so, any number in mind for how many you guys want?

There are currently 11 characters and that is already a nice amount. It gives a nice variety and the game gets intensive enough when all the 11 characters are on at the same time. Of course would be nice to perhaps add one or two more at some point. However it is more likely that we would first improve the variety of animations available for the existing 11 characters.

Around how many premium members do you guys currently have? How much has that number spiked in the past few weeks?

We don’t share the amount of premium members, but overall the userbase has grown past 70 000. Of course the last weeks have seen growth in all the numbers and we are very happy about that. The encouragement and inspiration we’ve gotten from the players is really awesome.

How do you combat players not role playing the game properly? Such as breaking the fourth wall in-game by pointing out it is a video game.

The main weapon we have against this is to curate the groups better on who you are playing with. Now there are the premium scenarios and we plan to introduce more features that will help with this. Although I’ve seen cases where some very weird lines that were likely an attempt to break the fourth wall have been magically incorporated in the story and have actually just made it stronger. It can be more damaging if many people go AFK and leave the game. We have just introduced an exit feature that allows for others to leave too if the scenario would become unplayable due to inactive users.

Do you think we will ever see the Velvet Sundown cruise ship in other locations on the sea? Such as a darker area, more tropical, etc.

Yes, the more scenarios the more alterations we can make on the surroundings too. We like to make scenarios very different so there would be content that appeals for many playing styles.

What are the future plans for Velvet Sundown?

In general terms we plan to improve the game and add more content. The exact plan keeps evolving according to player-feedback and what seems to be the most urgently needed updates. We are looking for ways to get more resources that would allow us be faster in development.