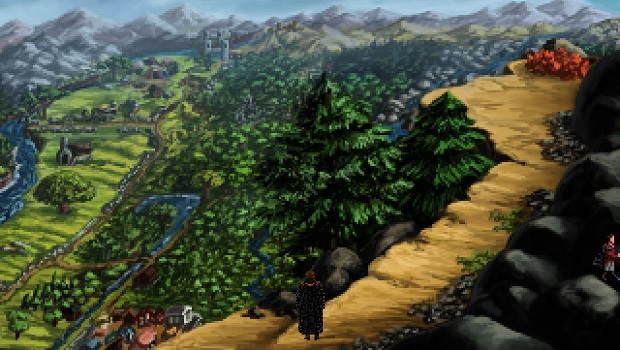 When an indie developer called Infamous Quests sets out to make a game called Quest for Infamy, well…the bar is set pretty high. But despite the challenge of living up to those names, Infamous Quests’ writer, director, and co-producer Steven Alexander is pretty optimistic about the old-school inspired point-and-click adventure game’s prospects. Although it’s been a long road from idea to reality for Infamous Quests, the team is confident that their “retro role-playing adventure game with attitude” is well on its way.

So what exactly is Quest for Infamy? “This is the kind of game you always wanted to play as a kid, but your parents probably wouldn’t let you,” Alexander explains. “You’ve got a few days in town to unravel a mystery, deal with the local sheriff, make some loot, win some friends and fans with infamous deeds, and get home in time for supper.”

If the game’s title didn’t tip you off, the protagonists of Quest for Infamy aren’t your traditional heroes. The game has three character classes to choose from: the stealth-based Rogue, strength-based Brigand, and magic-based Sorcerer. Whichever path you choose, you’ll need to lie, cheat, and steal your way through the story to arrive at one of Quest for Infamy’s multiple endings.

But according to Alexander, the anti-hero stars aren’t the only thing that makes this game unique. “Quest for Infamy is different because we made it; we’re a pretty awesome bunch of people,” he says jokingly, before turning to what he thinks really makes the game special. “It’s full of old school logic and item puzzles – and it has a great supporting cast of characters. With over 60 NPCs, all with dialogue guaranteed to make you chuckle. We also have danger, mythology, and nail-biting sequences to keep you on your toes.”

“The game is a throwback to old adventure games, where you had a huge story unfolding, and it was your job to find the clues, items, and people to help you solve the mystery.” Alexander believes that staying true to the roots of adventure games will be one of Quest for Infamy’s main appeals. When asked whether classic adventure games are making a comeback in the hearts and minds of gamers, his answer is an enthusiastic “Absolutely!”

“Gamers are getting older – and as much as many of us love these new games that graphically go to places we only dreamed of once – we still love these games we grew up with, and it’s fun to play “new” games that remind us of what we loved growing up,” he explains. But the resurging appeal of adventure games isn’t limited to those who lived through the heyday of Sierra and LucasArts.

“The younger generation, sometimes being burned out on everything that is thrust at them with an intensity that rivals a rabid raccoon, have begun to discover these older gems through word of mouth. Older brothers, sisters, parents… they’re turning the younger kids on to these and they’re eating them up voraciously.”

Wondering whether Quest for Infamy is inspired by any of those “older gems” in particular? “Oh, absolutely,” Alexander answers. “Sam and Max Hit the Road and The Secret of Monkey Island are two of the greatest and most subversive adventure games in history. The level of comedy, adventure and action in those games is unmatched. And, of course, we were influenced by The Quest For Glory series of games – their approach to fantasy, with epic stories and a touch of zany humor definitely inspired our game.”

Unfortunately, a great source of inspiration isn’t quite enough to get a game to market; in order for Quest for Infamy to move from fantasy to reality, Infamous Quests needed to scrape together some cash. “It was an idea we had floating around for a while, but we’d all reached a point in our lives where either we stopped making games entirely, or we try to put together a small budget so we could create this game and live (meagerly) while we did so,” Alexander recalls.

Kickstarter was the obvious option, but with little to show potential backers other than their own intangible vision for the game, the team knew they would need something more to make gamers believe in Quest for Infamy like they did. The solution? A playable demo. It let potential backers get a taste of the game, and is undoubtedly part of what led the Kickstarter campaign to its ultimate success; the more than $63,000 raised dwarfed the comparatively modest $25,000 goal.

According to Alexander, finishing Quest for Infamy simply “wouldn’t have occurred” without the aid of Kickstarter. “It would have been just an idea, and we’d all be doing something else, wishing we got a chance to make it,” he remarks, “So we owe this one all to our fans and supporters who gave us this chance.”

The feedback they’ve heard from fans so far has been very positive, with Alexander observing that the success of the campaign itself is one sign of that. “We raised a decent amount of money from Kickstarter to help produce the game. Smaller than some, but still – a good amount for a small group like us. That’s some pretty positive feedback right there.”

In fact, feedback was so positive that a second Kickstarter to fund an art book and strategy guide companion to the game was also successful, and the game has since been picked up by adventure-focused indie publisher Phoenix Online. Quest for Infamy’s demo has also proved popular, both during the Kickstarter campaigns and since. “We’ve gotten a lot of compliments on our fully playable demo, and I can’t wait for people to see the full game.”

With the game’s release just a few short months away, Alexander has a few words of advice for other indie developers who want to bring their game ideas to fruition. “I’d say the best advice is to keep at it. I mean, I know everyone says that – but staying the course, keeping focused and pushing ahead is the best thing you can do. If you want it – work it. Make it good – and then figure out how to get it to people. Talk to people. Make friends. Your friends and fans are your best assets.”

According to him, the climate is a friendlier to indie developers these days, but it’s still tough. “As for [aspiring indie developers’] prospects – they’re much greater these days, but it doesn’t mean you don’t have to put in the work. There’s no quick and easy way to do this. We’ve been at this for over 11 years now, working hard, building our fan base and building up the quality of our games and products.”

With that said, Infamous Quests’ hard work seems to be paying off, and Quest for Infamy may be just the start. When asked about plans for the coming years, Alexander’s optimism is almost contagious. “The future for Infamous Quests?” he ponders. “I’m no seer, but I definitely see us continuing to make adventure games in the future – and, perhaps, other genres as well. I don’t like to limit our options, because we’re all fans of many genres.”

But regardless of whether Infamous Quests sticks with adventure or branches out to something , Alexander is sure that whatever comes next will something worth seeing. Just be sure to bring eye protection; about Infamous Quests’ prospects, Alexander concludes, “The future’s so bright, I gotta wear shades.”