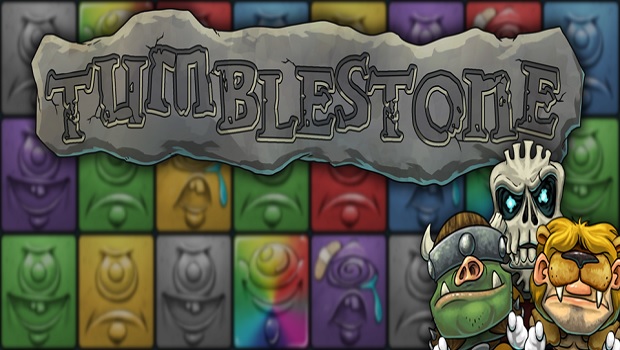 When I played The Bridge last year, I was very quickly taken with the game’s gorgeous artwork and original gameplay mechanics. When I read that Ty Taylor and Mario Castaneda, the forces behind The Bridge, were teaming up with friends Justin Nafziger and Alex Schearer (of Spotted Zebra) to make a new game, I was immediately curious. The game is called Tumblestone, and it is described as a “a casual, competitive multiplayer puzzle game” with “beautiful, hand-drawn artwork” and “maddeningly addictive gameplay”. I had the chance to ask Ty Taylor a few questions about the upcoming game.

GT: How would you describe Tumblestone to someone who has never heard of the game?

Ty Taylor: Tumblestone is a casual and addictive “block smasher” puzzle game. It was built from the ground-up with local multiplayer in mind, and its addictive gameplay will keep you playing “just one more round” with your friends. It also features a few single-player modes to sharpen your skills, with both casual and action-based play styles.

GT: What do you think makes Tumblestone different from other puzzle games on the market?

Taylor: The core gameplay of Tumblestone centers around a deceptively simple gameplay mechanic. Players clear blocks from their boards by pairing them in triplets, but once you start creating a sequence, you have to finish it, forcing you to think several steps in advance. While at first Tumblestone might sound like something you’ve seen before, it reinvents the match-3 genre and does so with fast-paced and casual multiplayer-focused gameplay. Players describe it as “feeling like Tetris,” even if the gameplay mechanic is far from it.

“It reinvents the match-3 genre and does so with fast-paced and casual multiplayer-focused gameplay.”

GT: Can you describe some of the different gameplay modes in Tumblestone?

Taylor: Much of the game formatting inspiration for Tumblestone came from similar casual arcade games, and so while the game’s core mechanic is unique, I expect gamers to be familiar with the layout of the game. The single-player modes consist of Marathon (a very laid-back mode with no time limit), Puzzle (a single board you have to fully clear without making a mistake), and Heartbeat (where rows are constantly added every few seconds, making you think and move quickly). As far as multiplayer goes, Tumblestone will feature round-based and continuous competitive battles modes, in addition to being able to play Marathon simultaneously with a friend in the cooperative mode.

GT: Local multiplayer play has gone woefully ignored by a lot of modern games. What made you decide to incorporate multiplayer gameplay in Tumblestone? Is the game best played with friends, or is it just as much fun alone?

Taylor: Tumblestone was designed around the multiplayer experience. Playing local multiplayer with your friends is one of the magic moments with Tumblestone, and it certainly won’t be woefully ignored. I originally decided to create a multiplayer-focused game because I felt like these games were an unfortunately minority and that recent multiplayer-focused games such as Nidhogg, Samurai Gunn, etc., are too action/twitch based. I wanted to create a local multiplayer game that was more casual…something that you could play with a friend or significant other who perhaps isn’t as much of a gamer as you are, while still being an incredibly enjoyable experience for everyone. It also features great AI and the single-player modes if you want to play by yourself.

GT: Consoles and couch co-op go hand in hand. Can you share anything about which consoles Tumblestone will be available on?

Taylor: We’re still pretty early in the development process, and we’re still working out the specific details of consoles. But you’re completely right–Tumblestone is a game that you’ll want to play on your couch with friends, whether it’s co-op or competitive. That, in addition to the 60fps 1080p graphics, makes Tumblestone a perfect game for the living room.

“Playing local multiplayer with your friends is one of the magic moments with Tumblestone.”

GT: Like The Bridge, Tumblestone features unique, hand-drawn artwork. How do the visuals complement the gameplay?

Taylor: In The Bridge, the only visual aesthetic that made sense was an Escher-esque drawing. Tumblestone features a much simpler gameplay mechanic that could lend itself to almost any visual style. Something that the visuals bring to the table in Tumblestone is personalization. Each player can choose from one of a dozen characters, where each comes with its own game board and environment, and this is strongly integrated into the game, especially in multiplayer. When you win a round, the background changes to your character’s, in addition to some other subtleties, to let all of the other players know you won, and motivate them to take the back the crown.

GT: How do you think fans of The Bridge will respond to Tumblestone?

Taylor: Hopefully they’re respond the same way as people who weren’t fans of The Bridge–smiling, engaged, and having a ton of fast-paced fun. While certainly both games are puzzles, they are in fairly different sub-genres. But I think there’s still a large overlap between the audiences of each game. Personally, I’m a fan of both immersive environmentally driven games like The Bridge and fast-pace multiplayer games like Tumblestone, and I think plenty of other people are as well.

GT: What kind of feedback have you gotten so far?

Taylor: The reception so far has been far beyond expectation! So far we’ve had several dozen players across a few different local demos, and everyone has a great time after playing it for a while. Many people lose track of time, which is definitely a good sign. It’s still early in development, and we’ve gotten a lot of great constructive feedback in terms of making the mechanics of the game clearer to players, and we’re definitely working to improve this, but the gameplay is definitely solid, and definitely enjoyable.

GT: What would you say has been the most challenging part of the development process so far?

Taylor: Oddly enough, the most challenging aspect of developing Tumblestone is marketing it. Unlike The Bridge, which in it’s novelty is easy to pitch to someone in one sentence to get them excited, Tumblestone at first glance appears like a game you’ve seen before. Sure, it’s technically a match-3 mechanic, but I hate presenting it like that because people immediately dismiss it, given the abundance of games in this genre in the past. But it’s not Zuma, it’s not Magical Drop, and it’s no Bejeweled–Tumblestone is a completely new mechanic that happens to be in the match-3 genre. Conveying that has been an interestingly difficult problem.

“It’s not Zuma, it’s not Magical Drop, and it’s no Bejeweled–Tumblestone is a completely new mechanic that happens to be in the match-3 genre.”

Taylor: Tumblestone will be available this fall on Steam, for Windows, Mac, and Linux. We’re also going to be giving a free public demo of the local multiplayer at SXSW in Austin, Texas on March 7, 8, and 9.

Whether Tumblestone will be as popular as The Bridge was remains to be seen, but luckily for interested gamers Tumblestone’s release is only a few months away. The game is published by The Quantum Astrophysicists Guild, a studio founded by Ty Taylor, and is set to hit Steam (and hopefully a few consoles) later this year. Stay tuned!