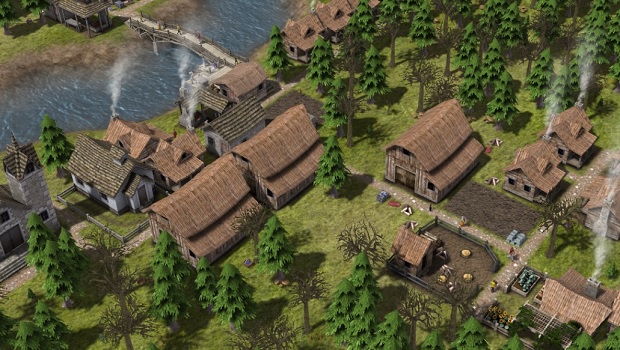 Successful indie studios are always the work of a small group of people with a lot of passion, but in this week’s Humble Mumble I talk to a special kind of indie studio: the one man team. Luke Hodorowicz is the sole developer at Shining Rock Software, and he’s been hard at work on an in-depth city-building title called Banished for the past two years. Banished puts you in control of a small band of travelers who have decided to rebuild in a new location. By managing trade, agriculture, and production, you will be able to sustain and grow the new settlement.  It’s a resource management/strategy game with a few important twists, and I asked Luke a few questions about the game’s development.

GT: What would you say distinguishes Banished from other city-building titles we’ve seen in recent years?

[singlepic id=16537 w=320 h=240 float=left]Hodorowicz: One distinguishing feature is that each citizen of the town is simulated. You can’t expand the settlement without the people, or even build a building. You need to guide them to generate enough resources to live. The game also lets you build and experiment with multiple strategies. You can use hunting and gathering over farming, you can try to build a town that is self sufficient or you can try to produce one thing and trade for everything else.

GT: Most gamers are more likely to associate puzzle or platformer games with indie studios than city-builders. What encouraged you to develop a city-building strategy game as Shining Rock’s first release?

Hodorowicz: I like city building games, so I’m making one. I actually found that when working solo, if you don’t love the type of game you’re making there isn’t much hope of completing it. I started with a different game that I thought people would like, and I wasn’t able to make it fun for myself. That was the wrong approach. After a writing a prototype of Banished in three weeks, I was hooked on my own game. I still am.

GT: How would you describe the setting of Banished? Does it take place at some point in history, or in a universe all its own?

[singlepic id=16538 w=320 h=240 float=right]Hodorowicz: It’s a universe all to its own. It obviously seems a bit medieval looking, but in building it I’ve been adding features for design reasons and fun gameplay over any historical accuracy.

GT: Banished is sandbox-based, with no campaign or multiplayer. What steps have you taken to ensure each new town is a different experience?

GT: You’ve described the townspeople as the main resource of the game. Are we just observers as they go about their lives, or can players actively interact with them?

[singlepic id=16539 w=320 h=240 float=left]Hodorowicz: You can interact with them, but it’s very indirect. You assign them jobs, you can check their stats, see what they are doing, and follow them around town, but you can’t force them to do anything immediately. The main interaction with them is providing them with homes and places to work, and they in turn produce food and resources so that you can then direct them to expand the town.

More Banished Gameplay
GT: What were your focuses when developing the AI in the game? What motivates the townspeople’s actions?

[singlepic id=16535 w=320 h=240 float=right]Hodorowicz: My main focus when writing the AI was getting all the people to work efficiently and still attain their own personal needs. They’ll work while they can, but they will stop to go to the market for food, to collect firewood to keep warm, or idle around if they aren’t feeling happy. They are motivated by a simple set of rules. There are a lot of factors that go into decision making, but a few of them are warmth, hunger, health, happiness, food variety, what is stored in their home, and where they live relative to town services.

GT: It’s never easy developing a game as an indie studio, but it must be especially difficult as a one man army. Have you faced any major challenges during development?

Hodorowicz: The largest issue has been the scope of the game. When I first envisioned this game it seemed really simple – but there are actually a lot of complex interactions going on between the citizens, the buildings placed, and all the inventory that gets shuffled around. There’s been far more artwork to create and code to write than I ever expected.

GT: What kind of feedback have you heard from playtesters of the game so far?

Hodorowicz: So far the feedback is really positive. Most of the issues that come up have been balancing issues or bugs rather than the overall fun level or issues with the design of the game.

GT: Are there still major additions or changes in the works, or are you mainly working on finishing touches at this point?

[singlepic id=16536 w=320 h=240 float=left]Hodorowicz: At this point it’s all finishing touches. I have a huge wish list of things I wanted to add to the game – but I know if I continue to add those things, I’ll just think of additional features to add and the game will never be ‘finished’. I can always add expansions and changes to gameplay later.

GT: And finally, the question that I and I’m sure many readers want answered: where and when can we give you our money? Have you nailed down a release date or distribution options yet?

Hodorowicz: My release date isn’t set in stone yet – I’m not looking to rush the game out just because of a date, but I’m still targeting to have the game available by the end of this year. I’ve got a bunch of distributors lined up and will be making an announcement about them soon.

You can find out more about the game at the Shining Rock Software website here, and follow the development of Banished on Luke’s devlog. I know I’m not the only city-building fan desperately awaiting the release of this game.