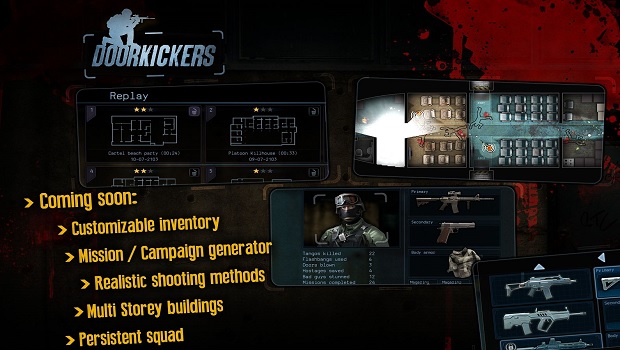 There is no shortage of games that try to offer players the experience of being a member of a military or law enforcement unit. Some games take this a step further, putting you in the shoes of a general or commander rather than a lowly grunt. In these games, strategy and planning take precedence over reflex and muscle memory. Door Kickers is one of the latter; it puts you in command of SWAT team as they breach buildings, rescue hostages, and kill bad guys. The top-down real-time strategy title hopes to become “the ultimate SWAT Team command simulator”, and I got the chance to talk to Dan Dimitrescu, the lead designer at KillHouse Games, about the game.

GT: How would you describe Door Kickers to someone who has never heard of the game?

Dimitrescu: In short, Door Kickers is a very fast top down RTS about SWAT teams clearing out buildings. It’s a easy to pick up game that lets you “try your hand at Close Quarter Battle tactics”. You just draw trooper paths and see what works and what doesn’t.

GT: Where did you get the idea for Door Kickers? Were you inspired by any existing games?

Dimitrescu: We got the initial idea a couple of years ago, thinking about how intriguing it would be to look at a top down building plan and draw movement paths for SWAT troopers. In actual development we took inspiration from lots of great games, including the original Rainbow Six series, Frozen Synapse or even … say … Flight Control :)

GT: Door Kickers promises realistic scenarios and strategies. What steps did you take to make the game more realistic?

[singlepic id=16474 w=320 h=240 float=left]Dimitrescu: We had a fair amount of knowledge on the subject when we started, but we also discussed the game and real life SWAT / Counter Terrorism operations with various Subject Matter Experts. Our pool of contacts range from US Military Special Forces to members of Romania’s premier Counter Terrorism unit. I was also lucky to be shown through some CQB / room clearing training by such an operator, and am trying to apply the concepts to the game. Game Design wise, we impose several realistic limitations to the capabilities of the troopers, and also we made the game pretty unforgiving so as to penalize wrong tactics and carelessness. Of course, the game is Work In Progress, so expect some not-so-realistic situations and changes to occur.

GT: What has been the biggest difficulty in developing Door Kickers?

Dimitrescu: Since we are a small self funded indie studio and this is our first game, the number one difficulty was how to use our limited resources to fund the development. With Steam Early Access and the visibility they are giving us, things are looking much better :)

GT: The user interface can make or break a strategy game. What were your focuses when designing the Door Kickers interface?

Dimitrescu: From the start we wanted to have the players focused on the tactical situation and free to experiment a lot. Discussing CQB with real life Counter Terrorists established two things: the most important aspect in your tactics are trooper flow patterns, and this business is rarely about waiting it out and trading shots from a safe distance. Room Clearing is about violence of action, about getting inside faster than the enemy can react. Thats why the path drawing is the most important and intuitive element in our interface. Everything else is contextual and derives from the path, and we want the player to have the right options at the right time. Instead of cluttering the interface with dozen of items that don’t work most of the time, we show you what is available when breaching a door, when moving around, and so on.

GT: Out of the scenarios currently available in Alpha 4, which one is your personal favorite?

[singlepic id=16475 w=320 h=240 float=right]Dimitrescu: I’d have to say its either the Embassy (level 19) or the final farmhouse (level 34), as both combine large maneuver spaces with key targets that focus your action. I also enjoy Level 31 quite a bit, a derelict industrial building is a very interesting space to clear with multiple troopers.

GT: Is there a “right” way to complete a given scenario, or is the game adaptable to different strategies/play styles?

Dimitrescu: The game is quite adaptable, but there are missions that impose you a time limit – race to save a hostage before they are executed. Even then you can improvise and try various strategies or tricks. Considering how fast the missions play, its not very hard to do that!

GT: Alpha 4 added variable entry points to the game. Are there any other features that increase variety when playing through the same scenario more than once?

Dimitrescu: There is a fair bit of randomness in most scenarios, affecting both the enemies and hostages locations and also their reactions. But in the grand scheme of things, the single missions are more like your proving ground – you get a set problem and learn how to deal with it, experiment and see what works and what doesn’t – multiple solutions possible! See for example the “Tri-Star the Beach House” contest. The complete Door Kickers experience will include a Random Mission Generator, and also Generated Campaigns.


GT: What major changes and additions are in the works for Alpha 5?

Dimitrescu: The most important addition for Alpha 5 is the Trooper Customization Screen. At the start it will only have a limited number of options, but still allow you to tweak the units to your playing style. Want to trade stopping power for recoil control? Swap the M4 for a Mp5 submachinegun. Lose the 1911 and replace it with a Glock, much less reloading will take place. But everything has pros and cons, there are no perfect weapons.

At the same time you’ll be able to take an early glimpse at the trooper customization that we sell via our Roll Call and Stuff of Legends packages here.

GT: You’ve made an effort to incorporate community feedback into the development of the game. What are your plans for community involvement going forward?

Dimitrescu: We have a couple of features planned that we think will be appreciated by the community:

GT: Do you have any concerns about releasing the game DRM-free?

Dimitrescu: To be honest, any DRM that we would be able to implement at our level would be easy target for professional crackers – therefore a waste of resources. We are more concerned with making sure our buyers can play the game.

GT: You’ve expressed an interest in bringing Door Kickers to Android. How do you think the game will transfer over to mobile platforms?

Dimitrescu: Android and iOS ports are planned, and technologically there’s not much of a problem since our code is easily portable. Still, there’s a bunch of interface and design issues to solve before the game would work properly on touch screens!

GT: Door Kickers currently has an estimated Q4 2013 release. Is development on track to release the game in time for the holidays?

[singlepic id=16476 w=320 h=240 float=left]Dimitrescu: It currently looks more like Early 2014 but depending on success we might be able to ramp up the resources and get out faster. The actual release date is not that important, as we plan to release updates to our builds regularly and to support the game with patches and DLCs after release. But the complete Door Kickers experience, campaign included, is planned to be in the hands of our supporters before the end of this year!

GT: What’s next for KillHouse? Have you put any thought into future projects?

Dimitrescu: We do have some plans for Door Kickers 2, with the main feature being a new setting and strategic level gameplay. Apart from that of course we have some “other ideas” but its too early to reveal them. Just expect the same style from KillHouse Games – military themed, realistic mechanics and tactics, light on the wallet and quick playing sessions. Oh, and “the other title” will be Multiplayer oriented :D

You can find out more about Door Kickers on the Steam Early Access page here, and the game’s official website here. Also be sure to look out for our preview of the game coming soon!