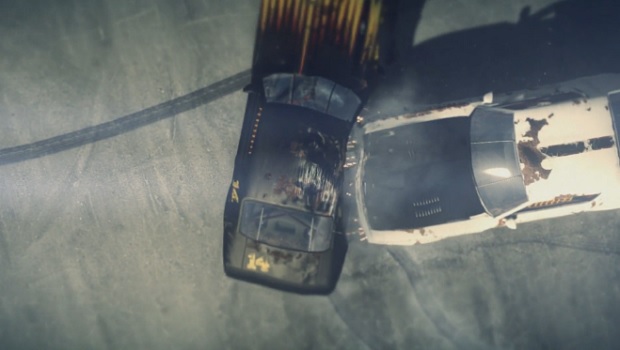 Once upon a time, there was a racing game. It featured high-octane demolition derby action, and was praised for its innovation and physics modeling. It spawned a series that spanned multiple platforms and generations, and created a dedicate fanbase in the process. So, although the fans have since grown up and the developers have since worked on other projects, neither could quite shake the desire to see another racing title like that. The game was FlatOut, the developer was Bugbear, and the fans will be happy to know that they’re returning to their roots. I asked Bugbear producer Joonas Laakso a few questions about their upcoming game, temporarily titled Next Car Game.

GT: How would you describe Next Car Game to someone who’s never heard of it?

Joonas Laakso: It is the definitive full-contact, demolition derby style racing game. There’s nothing like it! Well, except our old titles, especially the original FlatOut.

GT: What sets this game apart from other racing titles we’ve seen in recent years?

Laakso: We are not going after the widest possible mainstream market. We know our fans and we’re making the game with them and for them. The big differences are a heavily physics-driven driving model that makes the best use of our focus on run-down tracks and offroad driving, the heavy hits and focus on contact. And of course we have proper demolition derby, which hasn’t been seen in games in ages.

GT: A lot of fans have been itching to see you return to your roots. How do you think Next Car Game will appeal to fans of your earlier titles?

Laakso: “Very well!” This is absolutely our take on the original FlatOut, except with today’s technology and our added experience. You could almost consider it a remake, if it wasn’t for the new focus on building the cars. Everything you loved about that game is here, and then some.

GT: Whether it’s in races or derbies, cars are going to get wrecked. What level of detail can we expect from the damage modeling?

Laakso: The objective is to take your breath away and make you laugh out loud. We test the damage systems by driving cars through virtual industrial grade metal presses. The whole system is dynamic, so it’s always unpredictable and new, and we do a lot of tuning to make sure that every contact leaves a dent and that big hits totally bend you out of shape. We’re not afraid of going too far with it. The goal isn’t simulation per se, it’s having as much fun as we possibly can.

[Interview continues after this wrecktastic video]

Behind the scenes of "Next Car Game": Car damage fun!

GT: What about the cars themselves? Can you share any details about which cars will be included in the game?

Laakso: All the cars are fictional, but we go to a lot of effort to make sure they feel like real cars – not any specific real car, though. We’ve taken a close look at the kinds that are popular on US dirt tracks, UK banger racing, the everyman class in the Nordic countries, and fringe racing like that – cheap, beat-up cars that you just love to crash. Compared to most games these are much more vintage. There aren’t any showroom cars available.

GT: Next Car Game promises satisfying gameplay both out on the track and back home in the garage. What level of car customization will the game allow?

Laakso: This is still being worked on. The objective is to really focus on the internal workings of the car, not the outside so much. We want you to look for just the right combination of parts to get the best performance out of your machine, and have to replace parts between races due to old ones being damaged or just worn out.

GT: What kind of improvements can we expect from the new ROMU engine? Better handling, more feedback?

Laakso: We’ve increased the physical simulation accuracy for a better driving feel and more believable physics. Effects have seen a ton of work. Much of the rendering has been re-done. There’s been work on scaling – right now we’re able to comfortably run on rather old hardware, but the tracks aren’t finished yet so that may still change.

GT: Overall, what has been the biggest challenge in developing Next Car Game?

Laakso: We wanted to go back to our roots, but we didn’t want to just copy what we’ve done before. Seeing what’s a modern take on our old ideas and what’s just replicating is sometimes hard. The fans are sometimes very attached to some old ideas we don’t want to return to.

GT: What kind of response have you seen to your preorder campaign so far?

Laakso: The fans really are out there, it’s just a question of reaching them. Steam Greenlight was the first wider test of appeal – and it has been an immediate success. We broke into the top 50 in less than four days.

GT: Why should gamers preorder now instead of waiting for the game’s release next year?

Laakso: When you participate now, you get to shape the game once we release the early access version. We really are listening and seeing what you want in the game! Now is also the only chance you have of getting all the extra material and being featured in the game. We expect the majority of sales only after the game is out, but it’s great to get to work with the fans before then.

GT: When can we expect to see more of Next Car Game (screenshots, a demo, etc.)?

Laakso: There’s going to be the sneak peek version once we hit 10000 pre-orders and the early access for pre-order customers later this year. There is something else in the works, too, but we’ll get back on that a bit later. We’re releasing new material every week, so be sure to check out our blog, sign up on the newsletter and join the discussion on our forums! Go to www.nextcargame.com to find all of it.

Next Car Game has just been Greenlit on Steam, and is set to release next year.