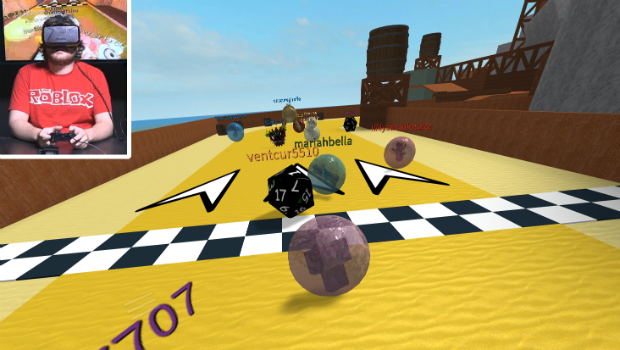 ROBLOX has announced an April 15th launch of virtual reality on Oculus Rift with cross-platform capability, furthering its vision of Powering Imagination™. On launch, the user-generated content platform will become the largest social virtual reality experience in the world with over 20 million monthly visitors. In anticipation of the launch, Gaming Trend spoke with David Baszucki, CEO of ROBLOX, to find out more about how virtual reality will integrate into the game’s world, reflect on 10 years of ROBLOX expansion, and look forward to what the game holds for the future.

Gaming Trend (GT): I recently started playing Roblox, and to me it seems like Roblox is a game where players come together to play, create, and discover new things.

GT: I know that you’re currently on iOS and on PC, are those the main platforms for Roblox?

DB: We added Xbox two months ago to our collection of platforms, and today Roblox is available on PC, Mac, iOS phone and tablet, Android phone and tablet, Kindle, and Xbox.  Today, (we showed) Roblox running in virtual reality.  It’s cool in virtual reality because it follows our vision that all platforms can play together, and whatever platform someone is hanging out on will give the best of class character and camera control to make the experience work in a 3D environment.

GT: With the virtual reality expansion, are there going to be new developer options for players, or is it coming from you guys?

DB: Everything you’ve seen, and everything you’ve played is created by the Roblox Community.  Every month about 300,000 players use Roblox Studio to create immersive content, and they are creating about 6 million games and experiences each year.

GT: So players will be able to go straight into their editor and create games that utilize and emphasize virtual reality?

DB: Absolutely.  Most Roblox experiences are going to work with virtual reality right out of the box, so no modifications are needed.  The notion is, right out of the box, if you’re a developer you create a 3D environment or game, you push it to the Roblox cloud, and by default all devices can access.  We handle the abstracting the camera and the character control so it works best for virtual reality, or whichever platform the player is using.

GT: So, this experience is a shared one, and once released, you’ll see people using the virtual reality right alongside those playing on a PC or tablet?

DB: And that’s really exciting, because at peak time on Roblox there are 350,000 simultaneous players, and what that’s going to do is make Roblox, when we ship Oculus, because it all works together it’ll be the largest social virtual reality experience anywhere.  You’ll be able to join 350,000 players with your Oculus, with a very rich ecosystem, thousands of games and experiences, hundreds of thousands of players…it’s not going to be a desert, you know?

GT: So let me first say congratulations, it’s my understanding that you recently had a 10 year anniversary?

DB: Oh we just had our ten year anniversary, and we’ve come so far!  We’ve had this same vision of creating this imagination platform, but we never imagined in our own dreams.  Two months ago, we shipped on Xbox, and every day for the last two months Roblox has been the top downloaded game or app on Xbox, and we never imagined getting this far.  We’re actually just beginning as virtual reality opens up, and there are more platforms we can add, and as Roblox becomes even more immersive and creative for friends to play together.

GT: With the ten year anniversary passed, and this virtual reality release, what now is the future for Roblox?

DB: We’re following on the theme of how can we allow people to imagine more together, to be more transformed, to be more social and and more immersive and with better content.  So you’re going to see Roblox get more immersive, the fidelity is going to come up, the number of players is going to go up, and the environments are going to become more real over time.   Whether you’re on a phone, a tablet, or a computer, it’ll become easier to find and play with your friends.  It’s going to be very spontaneous on the phone, and immersive in virtual reality.  On the content creation side, we’re going to continue operating both easier to use tools to create immersive 3D experiences, as well as more power to make these experiences even more transformative.  Watch for Roblox to make great strides on the social, immersive, and the content creation side.

GT: Well, David, I appreciate your time today, is there anything else that you’d like to say before we end?

DB: Well, just to highlight when we ship on April 15th this will be the largest social virtual reality experience in the world!  Thank you, and great talking to you today.

ROBLOX is building the future of entertainment as the largest user-generated online gaming platform, with over 15 million games and experiences created by users. ROBLOX is accessible from all popular mobile devices, computers, Xbox and now VR.  For more information, please visit www.roblox.com.