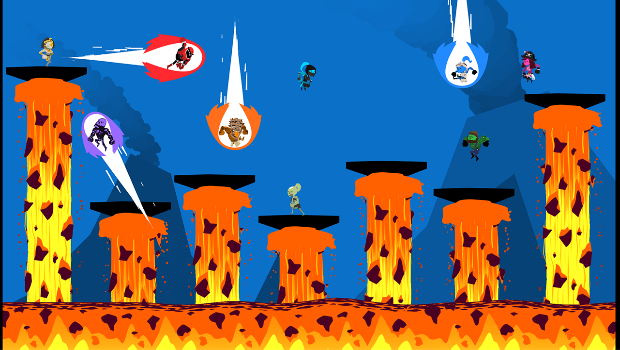 Recently announced at E3, 13 AM Games will release retail versions of the independently created Runbow this fall.  Runbow Deluxe and Runbow Pocket, for the Wii U and New 3DS respectively, are based off of the original eShop release and will include a few extras not seen in the initial title. We speak with COO and founder of 13 AM Games, Dave Proctor, to talk about the E3 announcement as well as future plans with its publishing wing, 13 AM Shipping Solutions.

Gaming Trend (GT): So E3 recently happened in June; how was the experience for your team?

Dave Proctor (DP): Another E3, another really cool opportunity. We got to announce Runbow Pocket, Shantae coming to Runbow, and the upcoming retail editions Runbow Pocket Deluxe and Runbow Deluxe! Our Twitter feed blew up after that and we were pretty pleased. E3 itself is intimidating, but it’s nice to see people are excited about what you’re doing.

GT: 13 AM Games is based in Toronto; did you happen to meet any other Canadian companies at the event?

DP: We usually end up bumping into other Canadians no matter where we go, usually by holding the door for each other. This time we were on some pretty specific missions though, so I don’t know that we met a lot of people that we didn’t already know. That being said we spent some quality time with the Capy team and that’s always fun.

GT: You guys announced retail versions of Runbow for the Wii U and 3DS during E3. Was keeping the information under wraps before the official announcement difficult?

DP: Apparently it was incredibly difficult, because both of those things leaked the week prior. Our retail publishers have informed us that you need to submit upcoming product notifications to digital retailers to get the word out, but that those digital retailers are not exactly the tightest-lipped. Mistakes happen; things get uploaded when they’re not supposed to… It was a big learning experience for us (and Nighthawk, our retail publishers were super helpful in handling the wave of information). The best part though was seeing that we had fans still excited to hear this news coming from us. It made the wait a little sweeter for everyone.

GT: Regarding Runbow Deluxe and Pocket, these versions will be marked as the definitive version of Runbow. Will there be any new content that will be added not found in the original?

DP: We are done with adding new digital content for Runbow (apart from Shantae’s upcoming inclusion), but we do want the Deluxe versions to have value that you can’t see anywhere else, which is why we are going to include the full DLC download with both, for the Wii U Deluxe version our complete soundtrack, and for the New 3DS version a pack of special 3DS themes. We are also going to add some special pre-order bonuses that we are still finalizing!

GT: I see that Runbow Pocket is going to be a New 3DS exclusive. Were there any challenges porting Runbow to the handheld?

DP: Well we are working really closely with Unity Games Japan and Nintendo of America to make this dream come true, and since they are building the engine for the console, any challenges we have are being fervently supported by the people who are the most capable to fix them. It’s been a good time so far, and we can’t wait to release it.

GT: For future DLC, I know that Shantae’s going to be an added character when the game is released this fall. How was collaborating with Wayforward on the inclusion of the character?

DP: Really fun and collaborative. It’s always awesome to meet developers who want to work with us in getting their characters in our game. It took a while for us to be able to sync up on it because we’ve been so busy since launch, and so has WayForward (Half Genie Hero anyone?), but this window of opportunity just presented itself and we had to take it. We’re glad too, because it’s something our fans have been asking for since launch. We’re really grateful that Matt and the WayForward team can help us make that fan dream come true.

GT: Going forward, what are your plans with Runbow after the retail versions are released? Any hopes for a sequel? More Sanshee merchandise?

DP: We have some more plans for Runbow that may come to light soon, but the big things for us are getting these versions out the door and seeing what we need. We definitely want to double down with Team Sanshee and get more merch out the door, especially seeing how much people want to represent the game at cons and events and things. But ultimately, who knows? Runbow 2? Vacation? Yet-Untitled-Non-Runbow-Project? The opportunities are endless.

GT: Any plans for you guys in the future? I know you just opened up a publishing division and are releasing Pirate Pop Plus to us later this year.

DP: Yeah, so Pirate Pop Plus is just one of our upcoming plans for expansion. 13AM Shipping Solutions came from the idea that we would love to help developers come to console, especially those that wouldn’t have otherwise done so. We are looking around for other games that really impress us in the same way, and we’re always looking for how to grow our company and work on new and exciting things. We’ve got a couple irons in the fire that we will hopefully get to talk about one day… but in the meantime, keep your ears to the ground for new Pirate Pop Plus news. The game is seriously addictive. Seriously. Testing it in the office takes up so much time because it’s too fun.

GT: Finally, I know the office was in the middle of a meme war for a few weeks. So let me ask you, team doddle or team cyclo? (Doddles and cyclos are in-game enemies.)

DP: Since I wasn’t part of the meme war (I was on vacation), I gotta go Team Cyclo. Mostly to aggravate everyone else in my office. COME AT ME ALEX. #TeamCyclo