With Canadian developer Lithic Entertainment’s Dwarrows approaching its February 28 release date on PC, we got to talk with co-founders Andy Wood and Alain Bellemare about the inspiration for the game, as well as the challenges that come with being an independent developer and the role of crowdfunding in independent projects.

Andy: My name is Andy Wood, I am the art-director and co-founder of Lithic Entertainment. I’m joined by my partner and co-founder Alain Bellemare who is the programmer / tech lead. Thank you for having us! 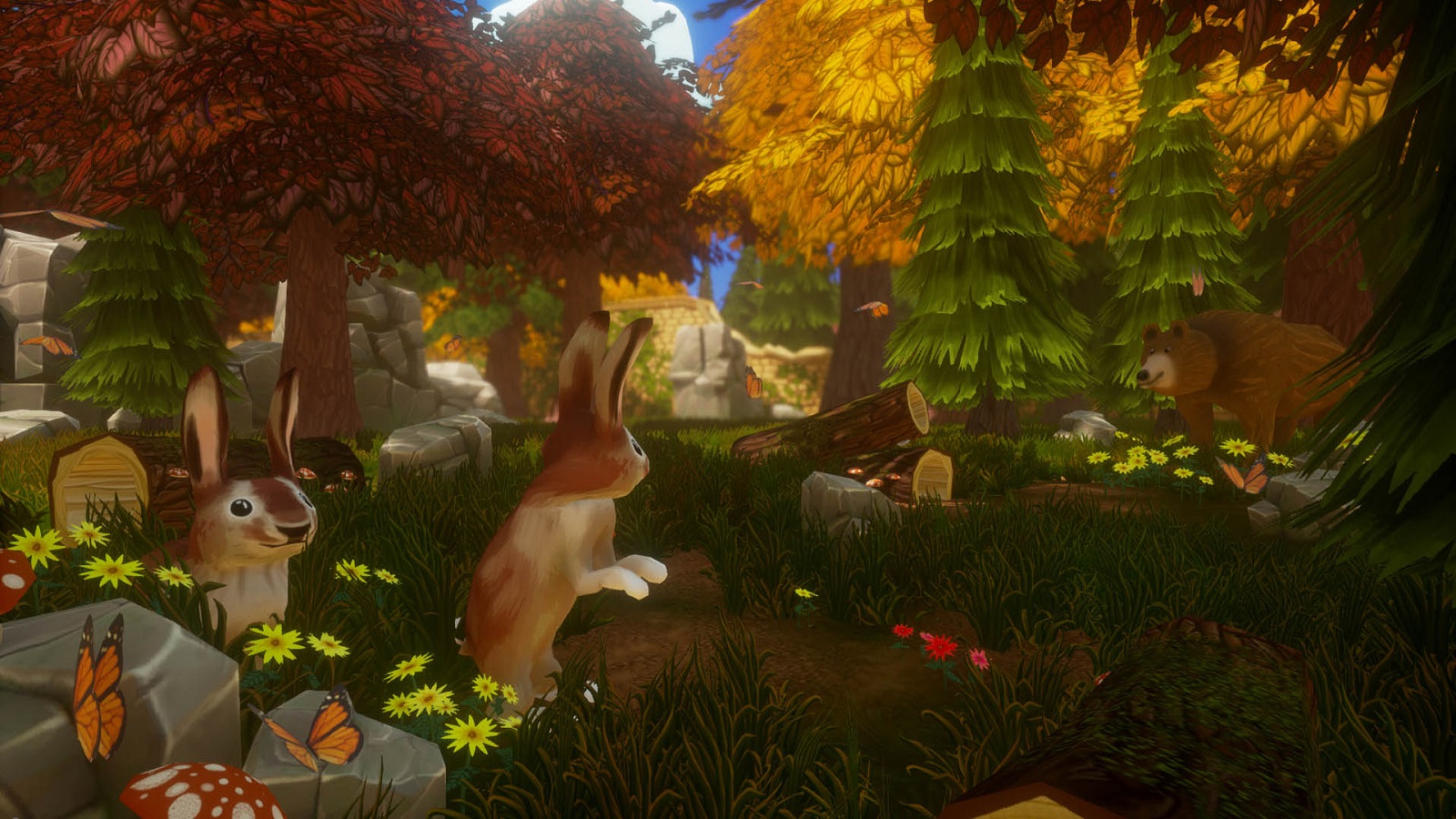 So Dwarrows finally has a release date, and it’s pretty soon! How does the team feel to finally be in the home stretch?

Andy: It’s surreal! It definitely doesn’t feel like it is actually happening. We have been working on this game for so long and honestly there are plans to continue working on it after the release date, but it is an amazing feeling to think we’ll finally have it out to the public.

Al: I’m absolutely terrified and exhausted, but I’m also more excited than I’ve been since getting my first dog. We’ve put in an absurd amount of time piecing this game together, it’s difficult to imagine life after Dwarrows, but I’m eager to find out what comes next.

What was your inspiration to make a game like Dwarrows?

Andy: For me anyways, it started from having a desire to play in a world where every interaction with other living things in the game world wasn’t to kill them. I just wanted a complex enough, immersive open world where I could relax after a stressful day at work. I feel like there are plenty of games that fill the desire to have daring adventures, hunt, etc. I really just wanted to play something like Dwarrows and it didn’t exist yet. So obviously the only logical conclusion was to spend the next 8 years of my life concocting it.

Al: I really like adventure games where you could run around the wilderness doing whatever, and then you can eventually purchase a home. Games like Elder Scrolls games and Fable have these home bases. In these homes you might have a few storage containers for excess equipment and you could maybe have a dog or an NPC live there. So I wanted that, but I also wanted your ‘home base’ to be a place that is more than just a trophy case or storage, and instead be a place that mattered to the player AND the characters in the game.

Obviously this is where the colony building aspect comes in. The town is a lively place with lots of people walking around and you directly impact how comfortable and happy they are. The Citizens themselves have “Needs”, inspired by the Sims, and “Thoughts”, inspired by games like Roller Coaster Tycoon. 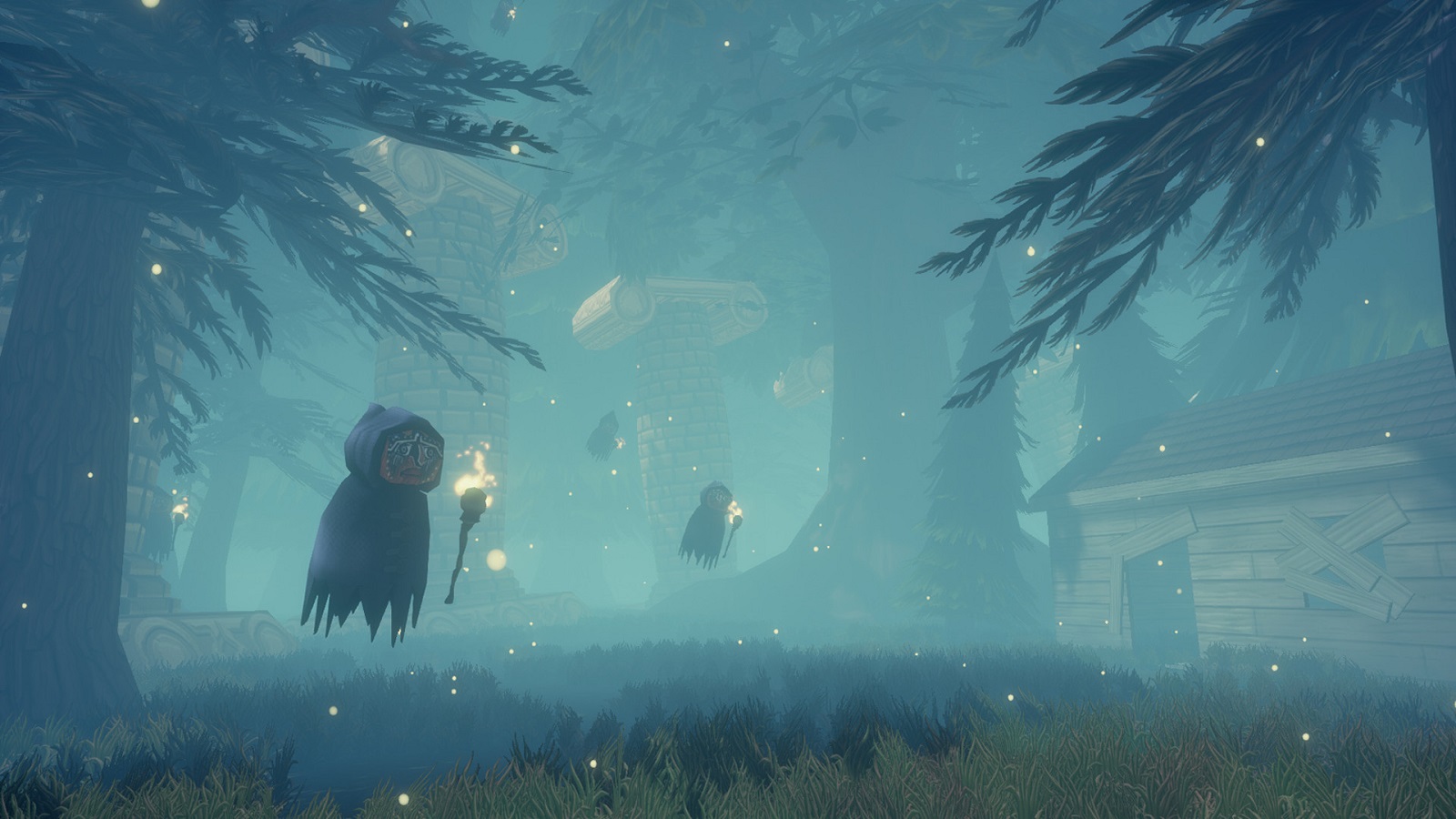 Being a three-person independent team, were there any challenges in regards to development of the game?

Andy: You hear this a lot from other indies, the thing about “wearing a lot of hats”. It’s true. You take on so many roles. If you take a week off, that is the entire art department, social media team, design, etc all off at the same time. I think people usually scope their game-size down to fit the team size, but we didn’t, so the absolute abundance of work is still pretty hard to describe.

Another thing is that we all came into this with a certain set of skills. Whatever skills you entered with on your first game, are probably not enough to bring the game all the way through. You end up having to challenge yourself and learn a lot in order to get through the project. Stuff you wouldn’t normally be tasked with doing if you were on a bigger team.

Also, we didn’t really have a “budget” so we did this out of passion and we had to work jobs full and part-time to pay our bills, etc. We did not have free time and I do not recommend this, but that’s what we did. I believe the appropriate emoji is this: ¯\_(ツ)_/¯

You’ve emphasized a relaxing adventure filled with fun characters to befriend and a nonviolent gameplay loop. What makes Dwarrows different from other competing titles?

Andy: There aren’t too many games quite like Dwarrows. In recent times, it gets compared a lot to My Time at Portia. I believe Dwarrows was in development quite a bit before MTaP, but they came out first and I am really glad for it. They proved that a cute, cartoony town-builder and adventure game was something there was an audience for. That game is so lovely, but thankfully for marketing sake, we are quite different.

Firstly, Dwarrows is specifically peaceful. I am aware there is some combat in MTaP and it appears to work really well in that game! We’re just making something a little different. My hope is that through story, dialogue, gameplay, and world-building that we subtly communicate certain values and feelings about charity, teamwork, and kindness while still making the core gameplay just… fun. I know I am cheesy, but I am who I am.

Secondly, Dwarrows has a lot more Zelda-inspiration. We’re big fans of the kinds of puzzles and quirky characters found in Zelda games and we wanted that sort of feel and gameplay in Dwarrows.

Third, unlike the other games hovering around this genre, the player controls three characters simultaneously. This opens up new opportunities for different puzzles, as well as new fun strategies for the player to discover when exploring, gathering, and building. Watching people play the game, we see that most of them catch on to leaving the builder in town, while finding resources with another character, and using the faster character to run around and find citizens to join the town. 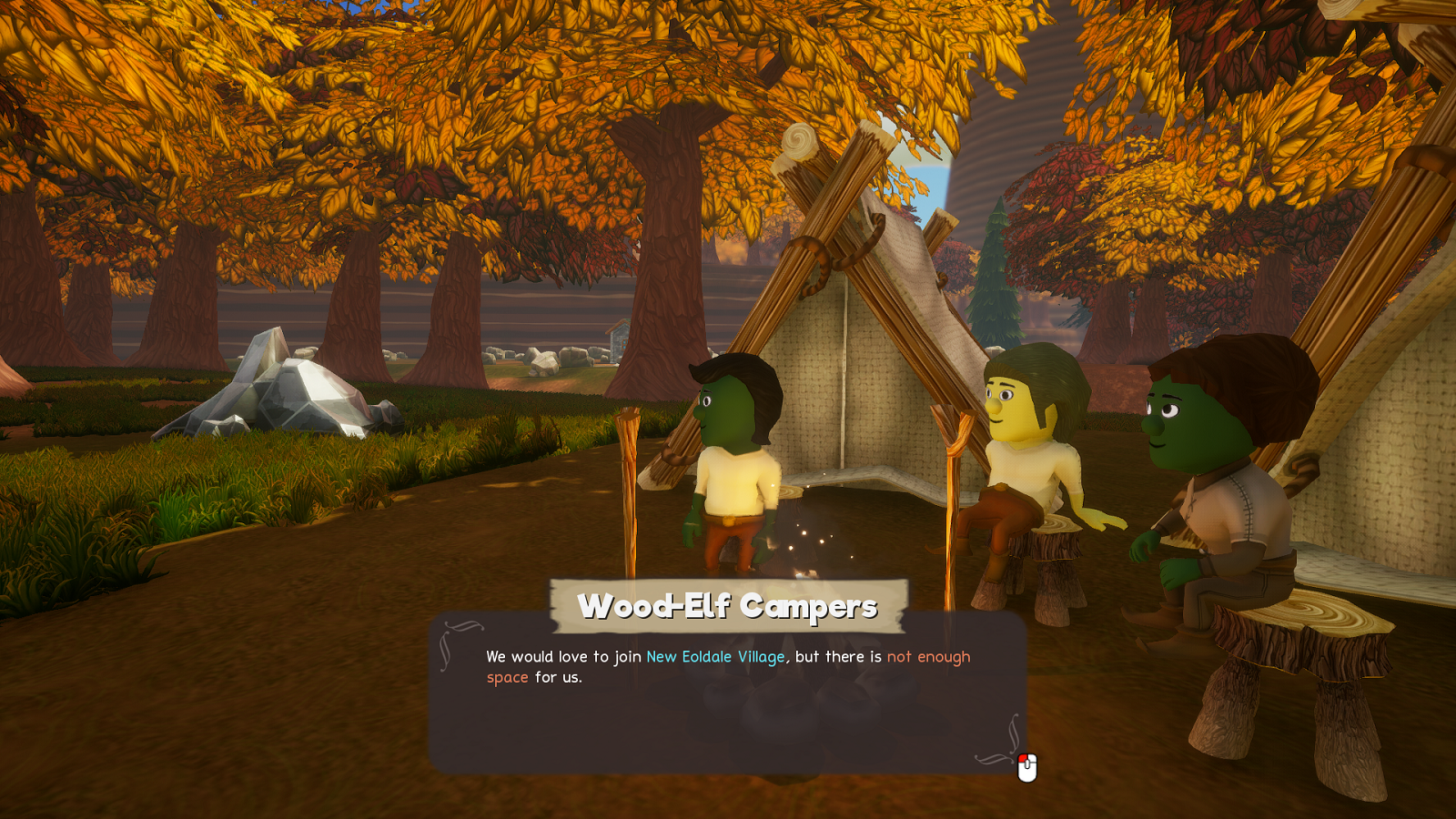 What is your favorite feature in Dwarrows?

Andy: We’ve worked on so many cool things, and I don’t know if this is because it is a recent change or just because it is funny, but I love how you can smash through pots by running through them as the Halfling. We have some really great, complex systems that took Al a lot of time to make, but I mean, c’mon!

Al: My personal favorite feature is the pet badges. Wildlife in the game can be ‘charmed’ or befriended and each one of your characters can have a specific pet follow them around. When a pet is assigned to a character, it can add “badges” to your characters, which gives stat bonuses to that character (so you can run faster, swing faster, unlock different item drops, etc…), or to your town (happier townsfolk, bonuses to environment, etc…).

I like that I can swap around the pets that I’m using depending on what I’m trying to do in the game right now. Want to run faster? Equip a bunny to help with that. Want to find food for charming animals? A bear’s foraging ability is where it’s at!

This feature is significantly more complex than breaking pots, but equally enjoyable in my opinion!

Kickstarter was a big part of funding for this game, as well as a lot of projects in Canada. How do you think crowdfunding has changed the indie game scene in Canada?

Andy: Kickstarter enabled us to elevate our project and reach new audiences. Specifically through the original soundtrack created by the astoundingly talented Neil Quillen. We were a zeroish-budget game before the Kickstarter and no one on the team could have put on a hat to fill the role of a composer, especially one of Neil’s calibre.

I can’t speak for other developers in Canada, but I do believe just having a successful Kickstarter is a great resume builder for your team when seeking additional funding, especially in the grant world which Ontario devs are so very, very privileged to have. Programs like Ontario Creates are a lifeblood for the creative ecosystem that is flourishing here. Crowdfunding is definitely a great way to prove there is interest in your project, in addition to funding activities on the project obviously. 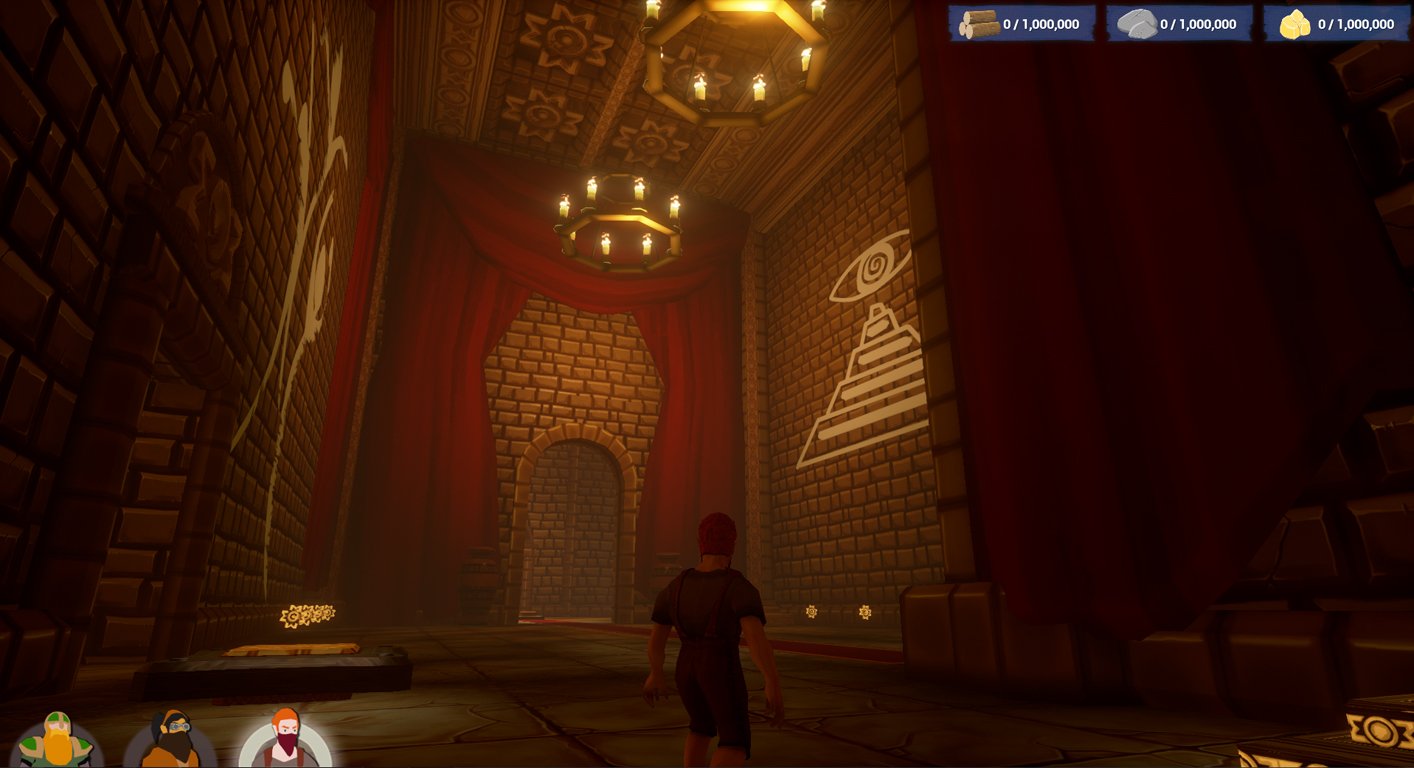 An early screenshot of the game.

Speaking of Canada, one question: poutine or all-dressed chips? What’s a great spot for food in Toronto?

Andy: I mean, all-dressed chips are good and all, but how do you compete with poutine? The Québec separatist movement fizzled out because Canadians could not have survived without those cheese curds. It was called the Pierre-Elliott Trudeau Fromage Declaration and it’s definitely historical fact, but definitely don’t look it up or @ me about it.

As for good eats in Toronto – While Panzerottis aren’t unique or native to Toronto in any way, Frank’s Pizza House has the best ones I’ve ever had. Also, it’s an ultra friendly place that is comfortable, clean, and nice to sit in. 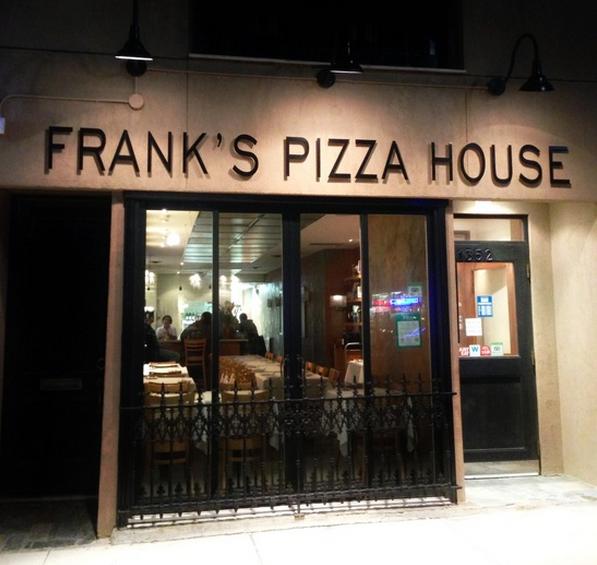 Andy: Let’s start with the music recommendation. Check out our composer Neil Quillen (http://www.neilquillen.com/) I actually adore the music that he wrote for our game and I listen to it all the time, even when I am not playing the game. Looking forward to the day he releases the whole album with thunder and rain sounds to work to. (I’m putting him on the spot. I hope he does this)

I would love to dispense advice to my fellow indie devs! I, the absolutely unhinged, Twitter-jokester who likes her own Tweets. You can absolutely do almost anything if you have the will and rock-solid determination to go for it. We’re a small band of nobodies who didn’t have any huge titles to our name or any money to do this. But!! Remember that your mind and body do have physical limits and you can hurt yourself in the long-term just by messing up serotonin levels from this lifestyle though.

Also, remember everyone in the world is privy to different kinds of privileges and setbacks. You have no idea what advantages or disadvantages others have. No two people’s stories are truly comparable, so there is no point in ever comparing your success to anyone else’s. If you are going to get into an industry like this that requires passion, then keep your sight set on your passions and your abilities. There are too many factors to base any of your self-worth on the reception or attention that your project receives. Your value as a designer, or artist, or programmer is intrinsic in the fact that you are a person out here trying and giving it your best.

Al: My fondest wish is to have people play Dwarrows and feel like it’s a place they feel comfortable and happy in. I’ve loved the long journey of building it. I hope that the game finds its way into some hearts and to see that the ride isn’t over after release!

My advice is if you’d like to take on a task of similar magnitude is to be mindful of your snacking habits. Things get stressful, pick only 1 flavour of chips and let the bag span the course of the week or two instead of a single sitting. You’re welcome :)

What’s the best way to follow Lithic Entertainment or stay updated with the team?

Dwarrows will be available on PC via Steam on February 28. Stay tuned for our review soon here on Gaming Trend.