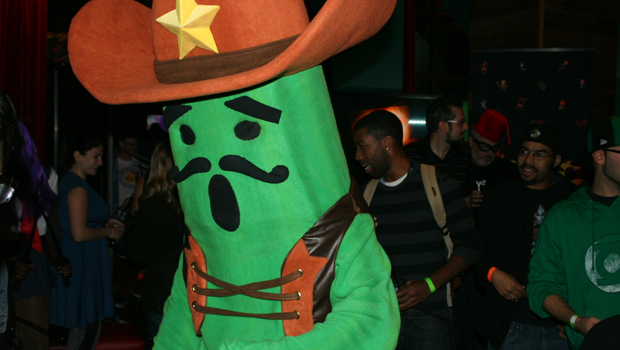 Any club with a DJ mixing Daft Punk to the Tetris soundtrack and the theme song from Mario is my kind of party. And when it’s open bar for anyone wearing a costume on the first night of New York Comic Con, well, it just doesn’t get much better. But I wasn’t there to dance, I came to talk to Fincon’s Head of Business Development, Sean Lee, to discuss their upcoming RPG title, Hello Hero. And maybe also get some pictures of a giant dancing cactus.[singlepic id=16586 w=320 h=240 float=right]

“We didn’t see many Mobile games that had the features and modes of a real MMORPG, so we came up with this idea for Hello Hero to bring the online RPG to the mobile” Just coming off a successful launch in Asia, Fincon is now prepping for their big debut in the states later this month. Sean Lee says, “We released it in Korea and Japan already, back in February. In Korea it hit number one in iOS grossing, and in Japan it hit number one in most downloads after five days.”

[singlepic id=16589 w=320 h=240 float=left]The first thing you’ll notice about Hello Hero is the variety of colorful characters. The cast of over 200 includes some unlikely team-ups, such as a space marine and a warrior cupcake. Long story short, all the heroes across the galaxy have gathered on a single planet to stop an evil force from destroying the universe. The 3D, anime-esque design looked great on the tablet displays set up around the party, and the gameplay should be familiar territory for any RPG fan. I managed to win my first few battles and level up my character right after picking it up.

Hello Hero is free to play, featuring several game modes including single player dungeon fights and online battles against friends. Sean Lee says that later this year, they’ll be implementing a feature that will allow friends to quest cooperatively online using their leveled up characters to form guilds for boss raids. One of the best parts is that it’s cross platform play. Whether you’re on FACEBOOK, iOS or ANDROID mobile, you can still meet your friends online and level up together.[singlepic id=16587 w=320 h=240 float=right]

I thanked Sean Lee and wished his team success on the upcoming launch before whisking myself back into the bass-thumping, costumed masquerade. As I moved through the crowd and passed Rinzler from Tron and a steampunk pirate, I smiled to myself. I still have three whole days of Comic Con ahead of me.