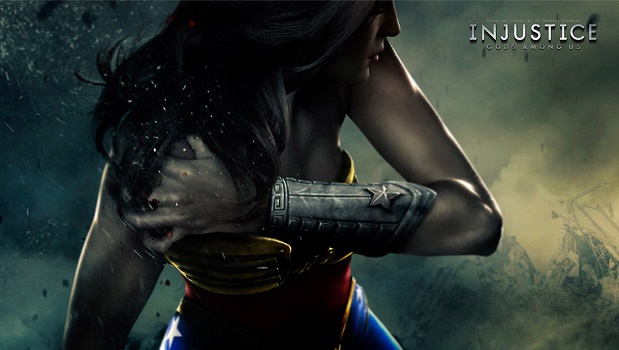 When I had a chance to talk with Adam Urbano, Senior Producer at NetherRealm Studios about their superhero brawler Injustice: God’s Among Us, I also got the chance to see a bit of their upcoming free-to-play iOS game.  I couldn’t say much about it at the time, but a week later I’ve got the go-ahead to talk about what I saw.

The latest Injustice game was made by the same team that brought us Arkham City Lockdown, a tie in to the last years Batman title that got decent reviews around the internet. The first thing I noticed when I started the game was that it looks pretty good for an iOS game–I suppose I should be jaded about games running Unreal Engine on iOS but it still amazes me that we get graphics like this on our phones.  You’ll see a few screenshots below, and while those certainly don’t’ look as good as the actual game, they still look pretty good in motion.

I only had about four or five minutes to play the game at the demo, but there were a few notable differences between the iOS game and its big sister on the console.  The biggest distinction between them is obviously the control scheme.  Lacking a controller the iOS version relies on tapping the screen for light attacks and swiping for attacks with a bit more oomph.  Another big difference is that matches on the iOS game are 3v3 instead of the 1v1 brawls on console.  In the 3v3 matches, characters non currently in the fight also grant bonuses to their team.  Some might heal non-active characters, others might grant passive buffs, and so on.

The iOS game will be a free-to-play, with a meta-game that seems to come right out of Wizards of the Coast’s Magic: The Gathering. Like most other free-to-play games, you’ll be able to get any character or skin in the game by playing or pay to have it instantly unlocked, but  you’ll also be able to buy randomized “booster packs,” to get your unlockables. We also heard plans about integrating the iOS game into the console versions, letting you gain special unlocks in each game by syncing both with an external service.

Injustice: God’s Among Us is due out later this month on PS3, Xbox 360 and Wii U, and I imagine we can expect to see the iOS versions around the same time.  No word on an Android release at this time, though. 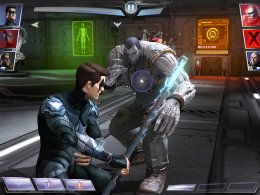 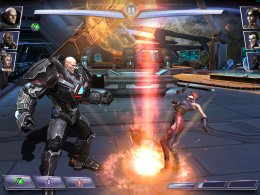 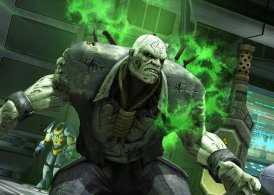 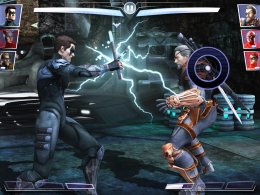