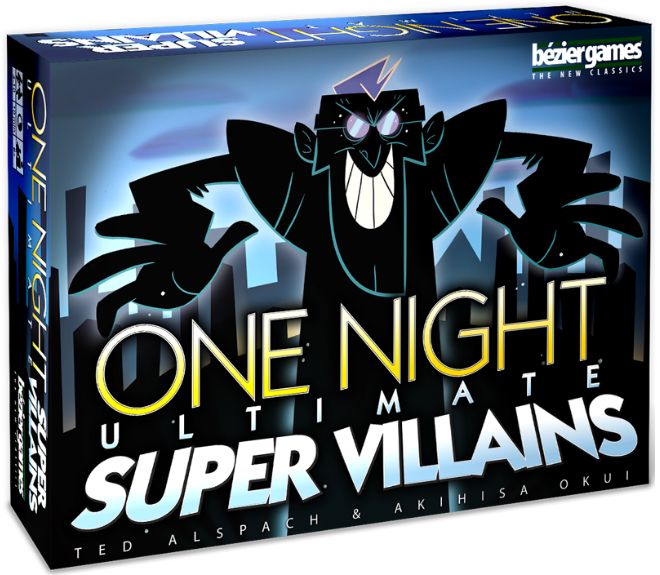 Some people really enjoy Werewolf for the social deduction aspect of the game.  However, it could drag on for far too long if your group liked to argue and the moderator didn’t keep the game moving.  One Night Ultimate Werewolf fixed that issue, and brought several new roles to the table.  Since then new themes have been used in the One Night series.  One Night Ultimate Super Villains is the latest in the series, and I got to ask Ted Alspach of Bezier Games about it.

Have you been surprised by how successful the One Night series of games has been?

Yes! We’re thrilled that it’s been so popular, especially with casual gamers. The fact that you can now buy One Night Ultimate Werewolf in any Walmart store is amazing!

Why use Super (Heroes and) Villains this time around?

We wanted to make a version of One Night that was more accessible to people who aren’t gamers, and who have never heard of Ultimate Werewolf (or any werewolf-related party game). By making this entry in the series more of a current pop-cultural theme and less “dark” we’re able to reach a lot of people who might never have given the One Night series a chance before.

Do you feel Super Villians will be more accessible compared to previous One Night games because of the theme?

Absolutely. Little changes to the game, such as having the players “catch” the villains instead of “kill the werewolves” and making many of the names of the heroes and villains describe what the roles do at night (for instance, “Switcheroo” switches cards between players) breaks down some of the barriers new players might have with social deduction games, as they’re unlike games most people have played before.

Did you find it easier or more difficult to create roles/abilities for Super Villains?

We based most of the roles in Super Villains off of roles that were successful and popular in the other One Night games, using our experience with those games to craft a really nice set of roles that work together really well. The most difficult aspect was how different to make the roles; in the end, we changed only small aspects of the roles that enhanced gameplay, and didn’t make roles different just to be slightly different than related roles in other One Night games.

What differences will veterans of the One Night series see in Super Villains?

One of the things that’s most apparent is that the Super Villains have their eyes open while each of them does their unique night action. This gives the Super Villains more information about each other, and other players than the “bad guys” normally have.

Another change is in the app – it’s more colorful than the original One Night app, giving more of a story to each of the roles as they take their actions. For instance, the Mad Scientist has a randomized backstory each game, which is both funny and unique.

The art looks brighter and vibrant. Was this a conscious choice?

Our artist for the One Night series, Gus Batts, has been asking to do a different artwork style for a while, and we thought that this would be a perfect entry in the series to do something a little different. It makes the game a little more accessible and fun, with a 90’s Cartoon Network-style flair.

Will Eric Summerer have different voices for each hero and villian?

Some of the roles have randomized audio, and Eric actually gives each of the roles a slightly different personality, like when Role Retriever (a dog hero) is woken up, he’s talked to the same way we talk to our pets. It adds a lot of flavor to the app.

We are already hard at work on the next entry in the series, which I’m super excited about. All I can tell you is that absolutely no one has even considered that we’d be doing a version based on this, but when we reveal it, I think people will be really excited.

There’s still a few days to go in this Kickstarter campaign, and it’s a great deal for $25.  I’m not one who usually likes to play social deduction games, but the fact that the One Night series takes the negotiation and condenses it has made me more interested in the series.  Be sure to check out the other games in the series if you are into social deduction games but wish they were a little faster playing.