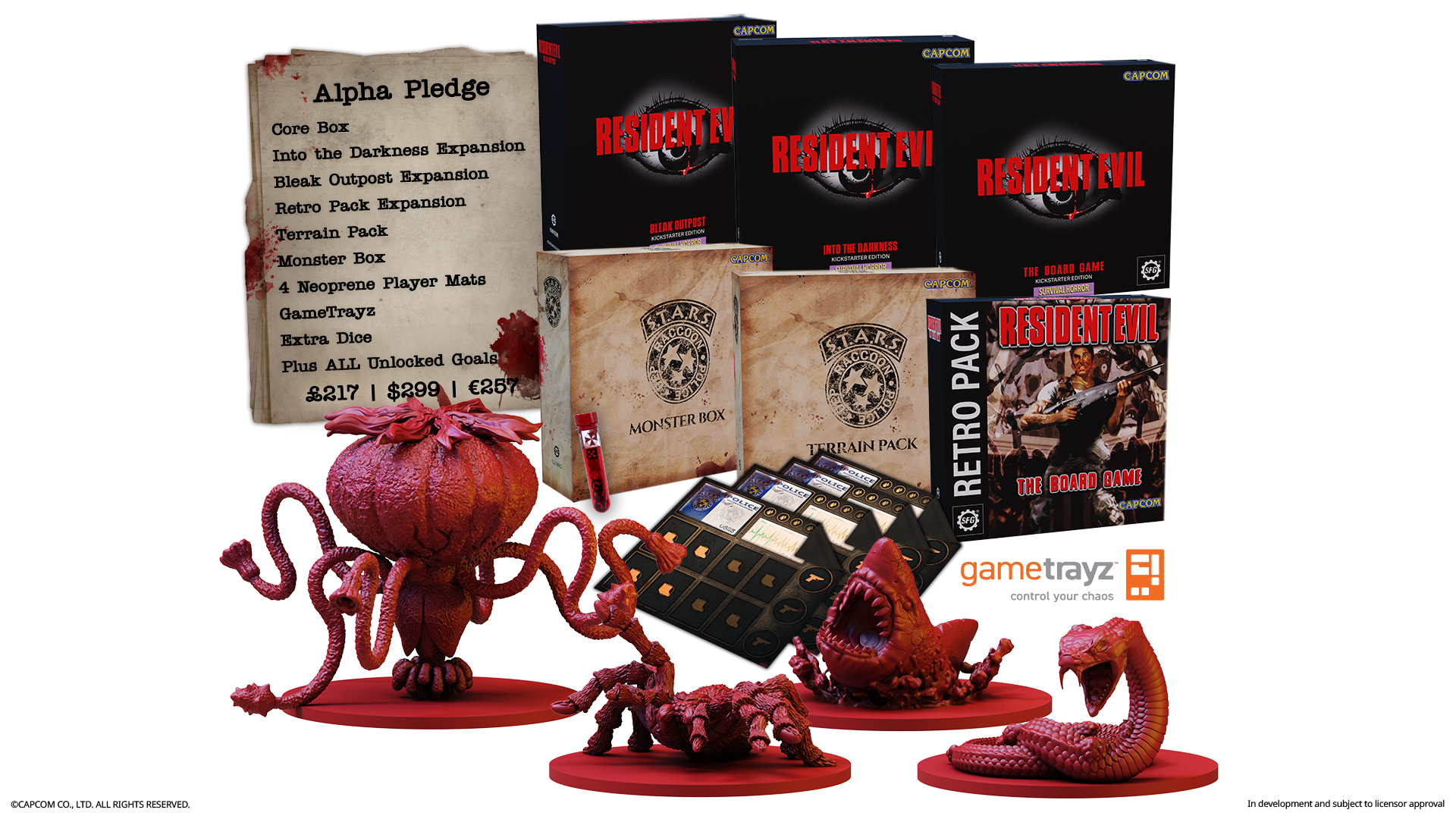 The Resident Evil series has been around since the original PlayStation console. Since then it has spawned several sequels and spin-offs. Steamforged Games has been known for several board game adaptations of video games like Dark Souls, Horizon: Zero Dawn, Devil May Cry, and Resident Evil 3. Now they are funding a board game based on the original Resident Evil on Kickstarter right now. I asked Sherwin Matthews, Designer of Resident Evil The Board Game, eight questions to find out more about it.

Creating a horror board game is a tricky proposition. How do you integrate horror into a board game?

You know, this might be the most difficult question you’ll ask me! I think the answer is to increase it in lots of small ways that ask the player to interact with components at a deeper level than simple rules. The more of those you can layer in, the more the player feels uneasy or on edge, and the better the experience is.

Let’s take ammunition for example. In Resident Evil it’s not only a crucial resource, but also a finite one. We use dials to track its usage, which forces the players to pick up the dial and count down their bullets each time they make an attack. It seems a simple interaction, but there is a psychological effect that happens there and goes far beyond anything I could write as a rule, where the player starts to feel under pressure as the numbers count down, and each bullet is increasingly more precious.

The same is true of our tension card system. Seeing green (safe) cards is fantastic, but the flavour text on them always points to the fact that it’s only a brief respite, and other more dangerous cards are out there. And lo behold, with each green card discarded, a sense of dread rises that the next one is surely an amber or red (bad) card. These tension cards are also carefully crafted to suggest possible outcomes narratively, so players tell their own stories with them. One turn you draw a card that has dogs howling outside, and if a few turns later a pack of Cerberus smash through a window, the players will quickly make a connection in their head, which just makes the moment more powerful.

Have enough of these and the game starts to transcend simple rules and become something else, which is the sweet spot for horror, where overactive imaginations can do the rest.

How is working with a license like Resident Evil different from creating your own universe like Godtear?

The most immediate consideration with a licensed product is that you’re a little more limited in scope for adding new elements, characters, enemies, and locations – not a concern with your own universe for obvious reasons. We couldn’t include dinosaurs prowling the halls of the Spencer Mansion, but in Godtear or Bardsung? I can adapt the lore to introduce as many tyrannosaurus as I like.

That said, it rarely, if ever, feels like a limitation. We’re not only deeply respectful of the licenses that we work with but also the studios that make them and their visions, but also find the games to be an excellent focus and foundation to work with. And it really shows when we sit down and talk to our counterparts at companies like Capcom or Guerrilla – they’re as passionate about their worlds as we are, and its always an exciting prospect to work with them to bring something to life on the tabletop.

Besides the license, how do you set apart Resident Evil: The Board Game from other zombie-themed games?

Something we’ve always tried to do with our licensed games is to deep dive into the core identity of the original video game. We never turn out a game which is simply an engine we had in our back pocket with a skin over it – the games we make have to have the same DNA as the property they’re based on through and through.

Resident Evil is at heart a resource management game, where every bullet and recovery item is precious, and every enemy forces a difficult decision of how to progress. You can seldom ever just throw a bucket of dice at a zombie to make it go away; combat is intelligent and rewards positioning and forward thinking, as well as teamwork. We also put a large emphasis on the importance of suspense and tension, even breaking the fourth wall on occasion, such as stopping the players from speaking for a round because there might be a horde of zombies prowling around outside.

Finally, we layer in plenty of meaningful decisions, with far reaching implications to the campaign. Most scenarios allow you to complete them in a variety of ways, and we’ll rarely tell the players which is best. But their choices will change how their version of the Spencer Mansion looks – it might become more or less dangerous, with different enemies or areas to explore, and different allies to save.

This year is the 25th Anniversary of the original Resident Evil video game, a game which is very dear to a lot of our hearts. I couldn’t think of a more fitting time to create a tabletop adaptation of Resident Evil and the Spencer Mansion; our game is a celebration of this iconic release, at a special time for all Resident Evil fans. 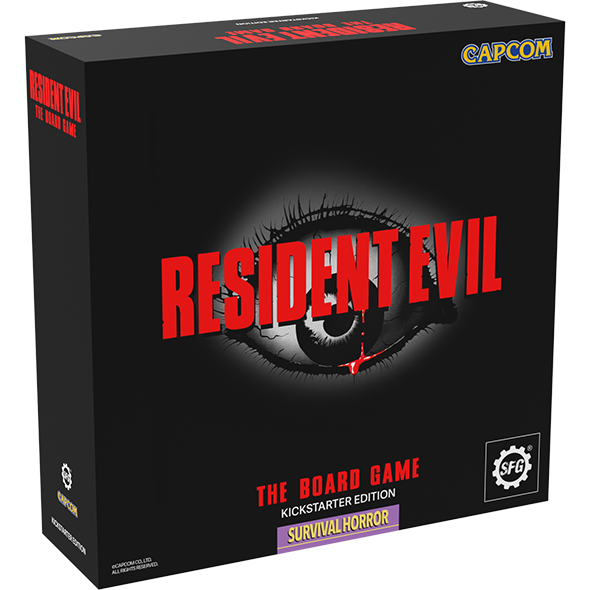 Are you recreating the storyline of the original Resident Evil game, or will you be adding some of your own twists?

As said previously we’re very respectful of the story arc and original video game, and will certainly be following that in terms of the main campaign. But, much like the original game and the 2002 remake, we’re not afraid of throwing the players a little curveball here and there, as well as using a little creative license to expand on some of the boss encounters to make them a little better suited for the tabletop. The Crimson Head Prototype encounter, for example, will take place in a much larger crypt where the monster pursues the players through the darkness as a relentless foe, while they try to use their wits and solve a puzzle to escape.

Our game also randomizes cut scene events – not only in terms of where they occur, but also who they involve. Let’s take a fairly iconic moment in the game as an example, such as stumbling upon a poisoned Richard Aiken and needing to search for an antidote in order to save him. In the video game, that’s a relatively early event, but in our game it might not happen until towards the end of the game – if at all. And it might not be Richard that’s poisoned either. Players will get to try and save as many of their teammates as possible, and give those poor souls from Bravo Team a second lease on life.

Will players be able to integrate some aspects of all the Resident Evil games together and create their own scenarios?

Although our Resident Evil adaptations each iterate on the previous release in some way to polish and improve the experience, and to better cater for the theme of the game, each of our Resident Evil games are designed with backwards compatibility in mind. At a basic level they use the same core Survival Horror system to control characters and enemies, and to deliver tension to the game. Players should very easily be able to add Leon and Claire to the escape from Raccoon City, or see how the U.B.C.S. soldiers fare in the Spencer Mansion should they wish! 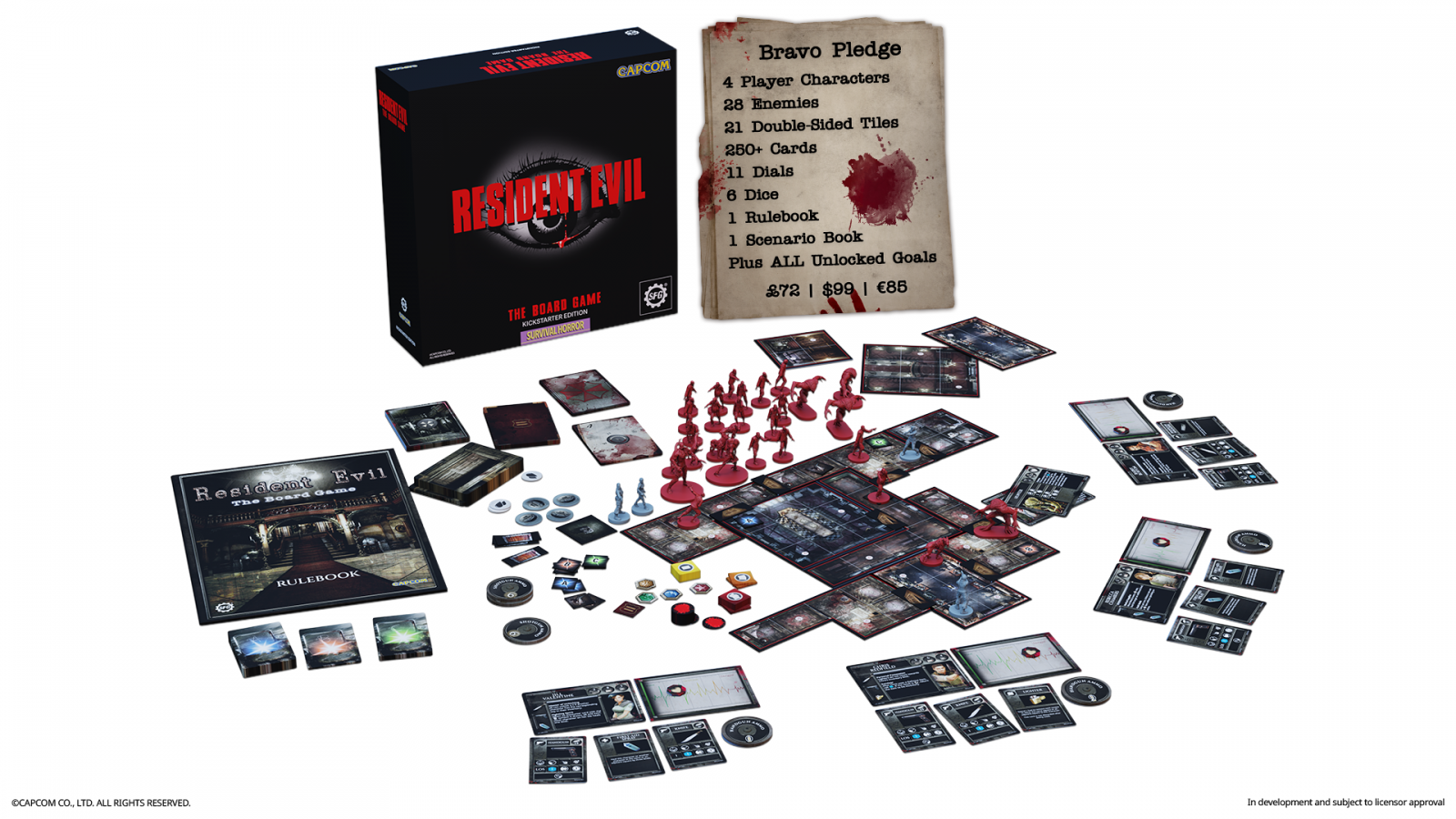 Do you think there’s a possibility that you might visit Resident Evil 4 and beyond?

Is Jill still “the master of unlocking?”

Ha, absolutely. There’s no way we could miss an iconic ability like that. It’s the name of one of her abilities, that allows her to open any locked doors she finds without needing the key. It makes her by far one of the most efficient characters in the game, and feels very much like her video game counterpart.

Steamforged Games always has impressive miniatures with their games, but I’m glad that they are conscious of the gameplay. I like how they will honor the plot of the game but still give it a few touches to make it a unique experience. You can catch their Kickstarter for a few more days yet, so if you are a fan of the video games be sure to check it out!