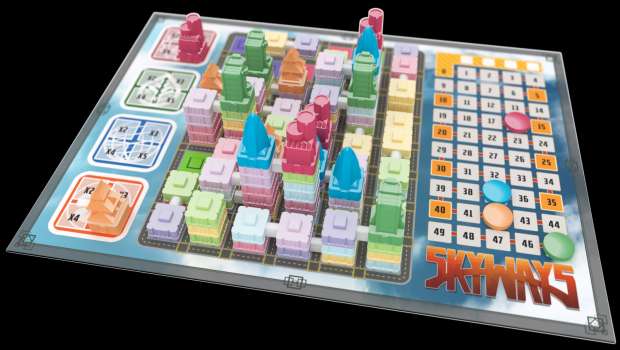 When you look at board games, most of the time you try to spread out on the board.  What if you had a game that wanted you to extend your pieces up?  Soon you’ll get your chance with Skyways coming up on Kickstarter.  I asked Jeff Allers, the designer of the game, a few questions about his history and how he came up with this concept.

Can you tell us a little about yourself and how you got into gaming?

I grew up in a small town in Iowa, then moved to Berlin, Germany right after finishing my Bachelor of Architecture degree in 1994, and have lived here for most of the past 22 years. My wife and I discovered “German games” about 15 years ago when friends introduced us to Carcassonne after dinner at their place, and we were hooked. I now had reasons to go to Berlin flea markets with my wife as I collected all the German classics second-hand and I was so enthralled, that while my wife read her novels in bed, I was reading all the new game rules. I later found a regular gaming group, and discovered a group-within-the-group that was playing homemade games. They were game designers, and those were their prototypes. It did not take long for the designer in me to make my own prototypes to show the group, and they encouraged me to pitch them to publishers. It’s now been 11 years since my first contract, and Skyways will be my eleventh published game.

You seem to have designed games in a wide variety of genres. Do you have a favorite genre?

I play with very diverse groups of people, and I like to play a wide variety of genres. When I host an open gaming event, I try to have something for everyone, and it often feels like DJing a party. Because of my own diverse tastes, I also like to design different types of games. It’s also a nice challenge and keeps me from falling into a pattern.

What is the basic premise of Skyways?

I enjoy tile-laying games—especially as Carcassonne played such an important role in my gaming life—and I have designed several, including Heartland from 2009. I liked the domino-style tiles of that game and the scoring mechanism, and I wanted to take that core and design a new game around it, this time emphasizing the vertical aspect. So, in Skyways, players are placing tiles that are made up of 2 building floors of different colors connected by a skyway. When you place a tile, you score for all the buildings of the same color connected orthogonally to the buildings you just placed and to each other (so there can be larger chains or regions of buildings of the same color). You also have 4 building “capitals” in your player color numbered 2-5. The numbers refer to the current level of the building, so if you add to a 1-storey building, you make it 2 levels high and could place your value 2 capital on that building. The capitals give you end-game bonus scoring (capital value multiplied by the region of matching color connnected to it). The rules are simple, but there is some wonderful tension in the placement and timing of the two different ways to score.

How long have you had the idea of Skyways brewing?

When Heartland was successful in 2009, I started coming up with other games that took the mechanics in different directions. I also have an card game prototype.

Many board games don’t have a vertical element to them. How did you come up with this mechanic for Skyways?

Heartland had a farming theme, but you were allowed to place tiles on top of other tiles, which gave it an unthematic vertical element, even though the tiles were cardboard. With Skyways, I wanted to use that in a more thematic way. I also made the board smaller so that the vertical element was even more pronounced.

Do you think that the look of the game will help make the game more accessible?

I think that it will definitely grab the attention of passers-by when they see it being played. This is the first game in which I have lobbied for plastic pieces, as I felt it was important to make it as vertical as possible and have the pieces lock in to each other so that they do not move around when bumped. Eagle-Gryphon’s prototype made with a 3D printer definitely has that “toy factor.”

Be sure to look for the Kickstarter on Friday, September 30th.

Edit: You can check out the new Kickstarter campaign here.