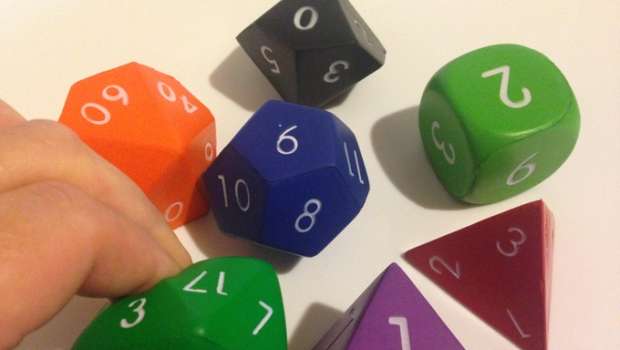 Several companies make dice of all numbers of sides.  Some use metals.  Others use wood.  The most common material is plastic.  Foam is probably the least common, and it’s hard to find ones made of that other than the giant six-sided dice at Five Below.  If you want your own foam set for your D&D nights, or teaching your kids how to play, you have a new option.  James Mathe of Minion Games has a Kickstarter page right now for foam dice.  I asked him eight questions on these dice.

You’ve published several games at Minion Games. What gave you the idea to create these foam dice?

I own a couple game stores and so I have the ear of many shoppers. I also noticed some dice in the educational industry that were lacking the percentile die and the d6 had to be bought separately. This gave me the idea that Minion Games could make a Gamer’s set of foam dice at a reasonable cost and put them into distribution for all game stores to easily get.

What’s the process for creating these foam dice?

It took me 2 years of searching to find someone to make these dice. It’s probably why others haven’t done it. So I’m not going to get into any great details, but in general you make a mold that is used to inject the non-toxic Polyurethan and then you paint the numbers on. Then package them so retailers can display them.

Is there a difference between these foam dice and the ones from your previous batch?

The major difference is these new ones are using a mold that has indented numbers. This keeps the numbers from wearing off and makes it easier to accurately paint them to start with. Besides that, we’re making 7 brand new colors!

Besides using them them to pummel your DM for a bad roll, can you use them during your game or are they more of a decoration piece?

While these really bounce, they are designed to be the right size to still be actually used on the tabletop. In fact some people really prefer them as you can easily read the numbers from across the table. Many people also use the dice for life counters in card games.

Is it difficult to create these dice with the “engraving” in them?

As mentioned, they are injected in a mold so it’s no harder to make them then without the indentation. In fact the indentation makes it easier for them to get painted accurately.

What colors will the dice come in?

Will it be possible to purchase these dice after the Kickstarter is over so people can purchase individual dice or possibly a custom set?

We made a ton of individual dice on our first Kickstarter and boy was that a nightmare as every single backer had a special custom order then. It also left us with a lot of left over dice that were not popular enough to sell out.

This time we’re introducing a d20 that is packaged so that retailers can sell them to card players. It’s by far the most popular single die requested. We’ve had d6 requests, but we currently sell a 4 pack of d6 dice in retail and our website so we’re not going to deal with the hassles of another option for them.

After Kickstarter and after everyone get’s their rewards, we’ll introduce the dice into distribution so all the game stores around the world can sell these. You may pay more or pay shipping, but they’ll be available. Currently our older colors with the newer mold are in distribution so you should be able to ask your FLGS for a set.

What’s your favorite use for these dice, or favorite story someone has sent you about how they used these dice?

Other then a GM or Player throwing them at each other, I can’t think of any right now. I’m sure there were some.

For a fun gift for the gamer or GM in your life, check these out.