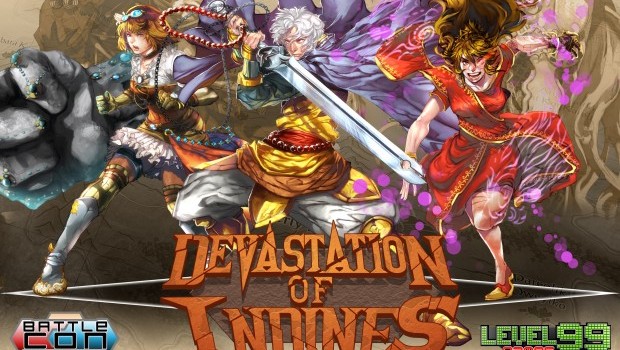 If you have seen my review of BattleCON: Devastation of Indines, then you know that I thought highly of it.  It’s a unique concept, and it is from a small publisher, Level 99 Games.  Now they have a unique worker-placement game currently up on Kickstarter called Argent.  I recently asked eight questions to D. Brad Talton, the creator of the Indines universe, to find out more about Argent and his other games.

Where did the name Level 99 Games come from?

Level 99 was the maximum level you could make in the old-school RPG video games from the Super-Nintendo. I wanted to capture something like that, since we have a line of video-game/board-game fusion type products.

You seem to have a soft spot for “old school” gaming. What is your earliest memorable gaming experience?

I think Final Fantasy 6 (FF3 in the USA) was the game I logged the most hours in as a kid, but the first games I remember are Legend of Zelda and Megaman 4. I was 5, and Megaman was waaaay too hard for me at that age.

How did you come up with the world of Indines?

It actually started out as a roleplaying game. The roleplaying game never saw the light of day, but since the lore and world were all fully developed, I decided to re-use it for the BattleCON series.

When you created the Indines universe, did you see it as something that would be used for the BattleCON games, or a setting that would tie several of your games together?

It was always intended to be an all-encompassing setting where many kinds of games could take place. I’d love to do some trans-media stuff eventually too–books, comics, visual novels, and more. It’s a setting that has a lot of potential. You could zoom in on one city and have a cyberpunk card game, or zoom out to the world and have a risk-like world conquest simulation.

Was Argent always set in the Indines universe, or were the mechanics figured out and then added characters and settings from Indines?

The game was originally in a generic, Harry-Potter-but-grown-up wizard’s university. When I played it for the first time, I knew it was a perfect match for the university I had envisioned in Indines. We had a to make a few changes–altering a few departments (Argent has 6, while the prototype had 4) and changing a couple characters. The core ideas of the game remain largely unchanged from the original though.

What sets Argent apart from other Euro games?

For me, it’s the replayability of it. In many Euro games, the strategies are pre-defined by a fixed board, a fixed set of actions. Either that, or they’re wholly dependent on how well you can capitalize on your opponents. Argent takes a much more “Dominion-styled” approach. The university changes; the spells at your disposal change; the mages you can control change; the conditions for victory change. It’s a game you have to solve again each time you play it, and the right move on round 5 in this game is not going to be the right move in round 5 next game.

When can we expect to see the final product?

We’re looking at June 2014, and we have most of our pipeline issues worked out, so you shouldn’t see delays like we had for Devastation. We’ve paced this project to make sure we can get everything on time.

Can you give us any hints to what you have planned in the future?

Millennium Blades is the big one to look out for! It’ll be our big Summer project, and we already have a couple articles on our site about the development of it. As for other things, we’re partnering with a few different studios to do crossover games, so there’s lot of exciting things coming, but I can’t say much yet :D