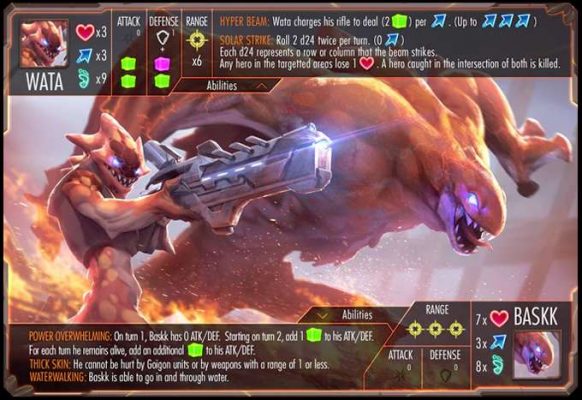 Skirmish games take all forms, generally with the idea of a dungeon crawl through different missions with one player controlling the minions.  Wanted Earth takes a slightly different approach.  While it is a one versus many game, halfway through the big bad comes out to challenge the heroes.  To find out more I asked the designer Eddie Zakoor about his current Kickstarter project.

What background do you have in the gaming industry?

None other than experience playing board games and plenty of video games. I particularly enjoy MMORPG’s and I think you can see that in our game.

Why create a sci-fi setting instead of a fantasy setting?

I’ve always been inspired by Star Wars, and I think there is a lot of room for creativity with the sci-fi theme.

How did you end up using 24-sided dice?

We wanted a placement system that was randomized for our alien faction in the game. Our board happened to be a 24 x 24 grid, so when we saw the 24-sided dice, it was like a match made in heaven!

How do you keep the Heroes competitive against the Faction?

We keep them competitive with their unique abilities and the option to buy items to upgrade their stats and provide gear that make them stronger. We also do not limit the heroes to taking their turns one at a time. They can go back and forth between their turns, which seemed more realistic to us than having to finish your entire turn before letting another hero attack, and buy or trade an item.

Why not have the Overlord show up at the beginning of the game instead of halfway into the game?

The Overlord shows up halfway through the game because it give the heroes time to prepare for him by becoming stronger. In the storyline it makes sense too, since at that time the Overlord realizes that he has to take matters into his own hands.

Are there special locations for the Heroes to purchase items or can they so that at any time?

They can do so at any time during their turn, and also at any location on the map. It does take one action though to purchase an item, but we do have one hero (Gavin) for whom this rule does not apply.

Why create the PVP rules where the Heroes are also trying to kill the other Heroes as well as the Faction?

Personally, I needed a more competitive gameplay option. We also kind of used that Marvel: Civil War type of vibe for this gameplay.

Do you have any ideas for possible expansions?

We already have the Vizototh expansion that is a stretch goal in our Kickstarter campaign. They are an alien race with a pirate-esque theme that comes to Earth to plunder and steal all of our credits and gear. We also have 10 expansions in mind already, so we will have a lot more for the Wanted Earth fans in the future.

Take a look at the minis and get more information from their Kickstarter page.