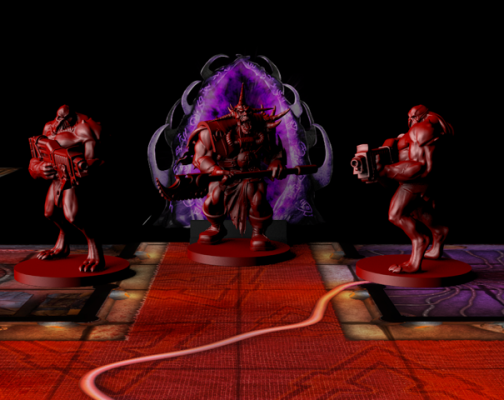 Modiphius had a great Kickstarter campaign with the Third Edition of the Mutant Chronicles RPG.  Recently they went in a new direction with this IP by launching a Kickstarter to reprint Siege of the Citadel.  The game looks great, has several big names behind its development, and has a unique setting, so I wanted to find out more about it.  I asked Chris Birch eight questions to find out more about the Siege of the Citadel.

What is the setting for Mutant Chronicles which is used for Siege of the Citadel?

The Mutant Chronicles story took you on this full throttle dieselpunk sci-fi ride through a solar system beset by corporate intrigue and the invasion of a terrible dark alien force. With technology failing due to the insidious effects of the Dark Symmetry humankind must fight back against the Dark Legion hordes whilst dealing with in-fighting and conspiracy from within.

The Solar System is a roaring mayhem of death and war. The surfaces of the inner planets have been swept clean by the violent onslaught of the dark legions storming hordes of Nepharites, Razides, Pretorian Stalkers and Undead Legionaries. In the enormous cities of the far and distant future, heretics devoted to the destruction of humankind stalk the dark backstreets and gloomy alleys spreading their teachings of greed, jealously and war!

How did you come to the decision to make a reprint of Siege of the Citadel?

We were approached by Cabinet Entertainment, the owners of the Mutant Chronicles brand and who we have been working with on the roleplaying game and Conan RPG. They loved our previous Kickstarter projects and wanted to partner with us on bring Siege of the Citadel back again. It was a dream as it was one of my favourite boardgames to work on.

How did you get several highly sought-after designers to collaborate on this project?

Well Richard Borg worked on the original, and Kevin Wilson and Eric Lang both grew up on Siege it was in their favourite games of all time, same with Jay Little he emailed me threatening death and destruction if he didn’t get to work on it – I think he has three copies of the original game!

What makes Siege of the Citadel unique from other miniature games?

Well it did a lot of things first back then, but now, it’s the competitive co-operation that’s fun – you never quite know if another corporate player will screw you over and everyone takes a turn at the bad guys (and wins points for playing them well) so that revolving 1vs many player role makes it quite unique to all the other games out there now.

What are some of the differences between the original game and this version?

We’re still in development but have added a new Hack Attack action which lets you interact with new scenery like doors, traps, turrets, consoles, generators etc. This opens up the equipment options more as well. We’ve got a great new character tray that manages the cards of your two characters, a lot of the abilities have been balanced, the way characters rank up has been balanced better so it’s not such massive changes, brand new missions, new sculpts, double the number of tiles and much more.

It looks like an actual structure for the Citadel was included in the original game. Will we see this in the new version?

We’re just offering this as a stretch goal for backers, we’re replacing it in the retail version with various portals and doors for the Dark Legion, but we are keeping the raised plastic stairwell!

Can you tell us if Richard Borg suggested a large number of the changes made, or were the changes suggested made by the other designers and then approved by him?

We took feedback from the community over the years, from players who’d been working on fan made rule sets, and ran a big survey about some of the changes. Richard Borg had a big list of things he’d been wanting to change and Eric Lang and Kevin Wilson are also working on some of the changes for the base game.

Do you have plans for more expansions besides the Brotherhood expansion if the Kickstarter goes well?

Oh yes, there’s a lot coming – they pretty much write themselves as there’s so much of the universe we can bring in to the boardgame and we keep thinking of too many cool ideas…!

The Kickstarter has already made two and a half times its goal, which is an impressive feat with over three weeks to go.  It looks like its funding is just going to continue to climb, so there’s no doubt whether this will be released.  If you are looking for a game with a unique setting designed by some of the best in the business, then be sure to give Siege of the Citadel a look.