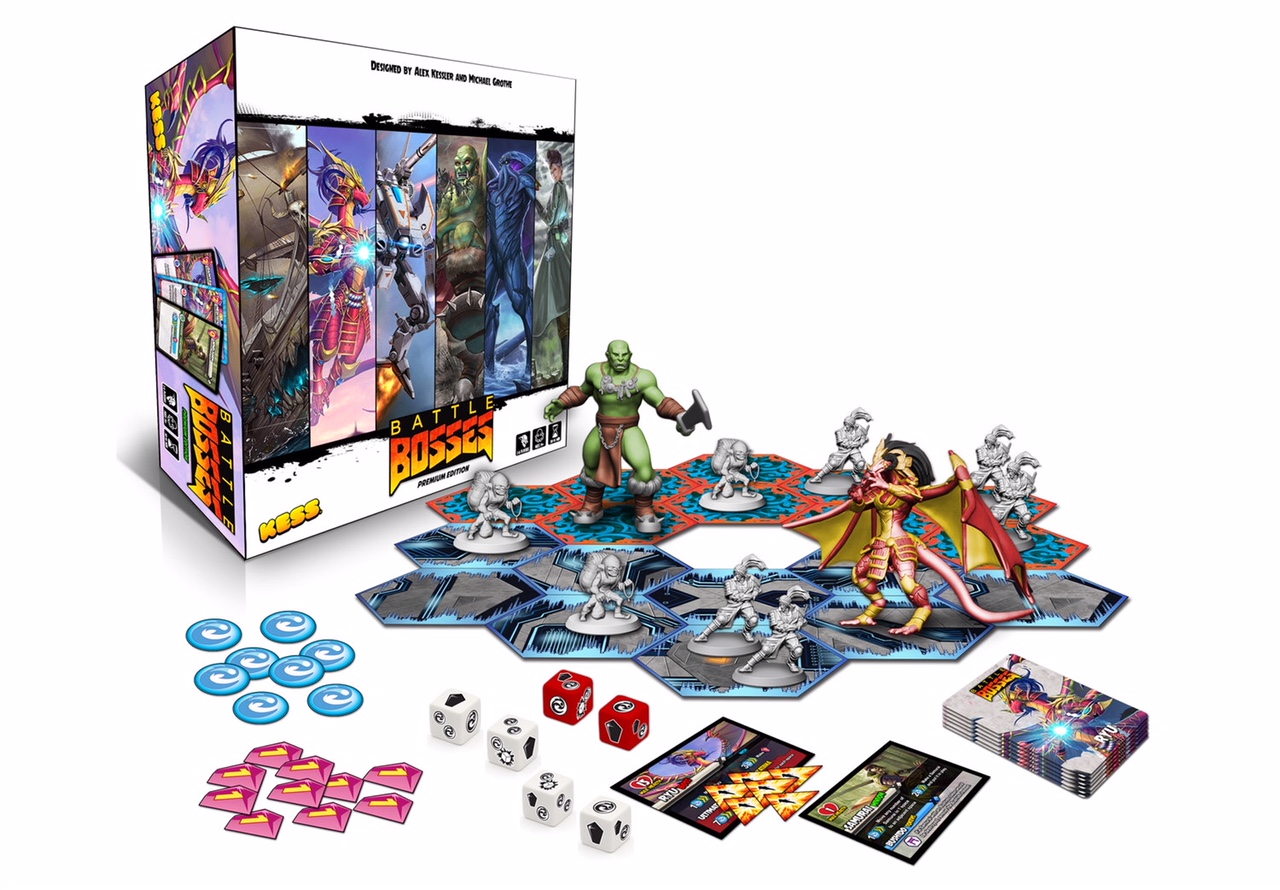 If you ever got a chance to play Heroscape, then you know it is a mishmash of characters from different genres and time periods.  The customizable hex maps could create all sorts of scenarios.  While the large armies and maps made for epic battles, the setup and takedown of the game could detract from it.  When I saw Battle Bosses, I thought that it had some similar mechanics of Heroscape with a streamlined ruleset.  To find out more about the game, I asked Alex Kessler from Kess Co. eight questions to find out more.

Why did you start designing games?

I was raised in a creative environment from day one. My father designed toys, and my mother was an artist. I started designing games as a kid and I was always obsessed with Build Your Own Level features in video games. That eventually drew me to trading card games like Magic: The Gathering. I was always drawn to games that allowed me to be creative and build my own decks. Eventually I started making fan-made cards for Magic community contests, and I realized that focusing my energy on making my own games instead was a better use of effort, which was when I really started seriously building my own games. The first game I designed, Super Party Battle: Freshman Year, had a limited release run on Think Geek and Amazon last year.

Where did you get the idea for Battle Bosses?

The concept of people each buying their own compete battle set and then battling each other with miniatures was where it really started. Originally it was a game that we called Terra that was inspired by real-time strategy games like Command & Conquer and Starcraft where each player would build bases where each building you build would unlock other buildings and you would be building up a bigger and bigger base based on kind of a “tech-tree”. During the design we created these Mega Minions that were ultra powerful end game components. Those Mega Minions also happened to be the most fun part of the game. We decided to focus on that facet, and rebuilt the game from the ground up focusing on those end game Bosses. Eventually, we realized that upgrading your Bosses with more powerful abilities as the game progressed and doing a lot of fighting with minions reminded us of MOBA games, such as League of Legends. That realization caused us to develop Arena mode, which is a 3v3 team game mode with neutral monsters that you can gain as pets and team bases to destroy.

Why set it in a universe where robots and goblins exist?

Because the game is set in multiple universes and timelines. I love different tropes being forced to interact, and battle when appropriate. Letting people play as giant fantasy creatures, gods, or robots felt like exactly what Battle Bosses was trying to accomplish and gives anyone wanting to play the game a genre and a play style that they enjoy.

It seems like there’s a Chess-like element where your Boss is the most powerful piece but also needs to be protected since you lose if it loses all health. Is this intended?

We knew from the beginning that having an arena map can always have chess elements, and us having Queen-like main unit that is also a victory condition for your opponent can also feel this way. The way cards, resources, and abilities are used creates an entirely different experience though. One of the issues we had with Terra, and an issue with Chess, is that a computer can analyze the board and almost always find the correct line of play. Because we started out with a much more chess-like game, we were very conscious of introducing mechanics to the game that keep players on their toes. Players have to react to their die rolls, the cards they draw, and the rolls and cards of their opponents, creating a unique experience each game.

How is movement handled in Battle Bosses?

For the most part, units move using Energy that you gain by rolling dice. Bosses can move 1 space per energy spent, and Minions are able to move as a group, 1 space for 1 energy. Some Effect and Upgrades cards allow you to move units as well.

Why use dice for energy and crystals instead of getting a set amount each turn?

Partially to make sure that no game can end up the exact same. When we were testing Terra, we ended with decision trees that a computer would always make optimally. We want to challenge players to have to make dynamic choices based on the situations they find themselves in. Unlockable dice also creates incentives and bonuses for bosses to work towards that allow the game to scale up the longer it proceeds. Dice also create exciting in-game moments where a lucky roll can turn the tide of a battle.

Does each Boss have different side with different probabilities for energy and crystals from other Bosses?

The first 6 bosses all have the same dice faces as do the 6 possible Kickstarter unlockable bosses. The game is designed to allow bosses to add different dice to the game as it grows, and its definitely a design space we are planning to use in the future. But we wanted to make sure that the first year of bosses had similar resource access.

If your Kickstarter campaign is successful, do you have other games in the works or ideas for future expansions?

We have both! Currently we have around 4 additional games that we are working on, slated to be released at some point in the future. And Battle Bosses has always been designed for expansions. I mentioned that beyond the starting six, there are an additional six completed bosses available during the Kickstarter that can be unlocked if we hit specific stretch goals, and beyond that I have a design document with around 30+ different additional bosses at different states of readiness. The game was built from the start to be able to be expanded to additional Bosses and Minions.

It looks like a game with a lot of replayability with the strong possibility of expansions in the future.  Take a look at their Kickstarter campaign and support a small game publisher.