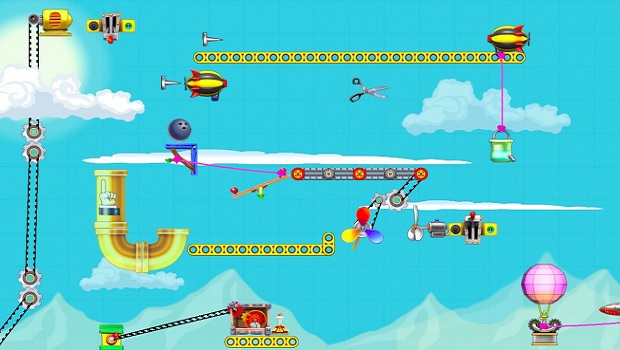 Earlier this week, we took a look at the Early Access version of Contraption Maker, the spiritual successor to the Incredible Machine series. The game is crafted by the same team behind the original franchise, but offers a modern take on the familiar Rube Goldberg mechanics. Like the previous games, Contraption Maker offers players a toolbox with which to build chain reaction machines that are both needlessly complex and incredibly fun. I got the chance to chat with designer Jon Tunnel and creative director Jeff Tunnel about the game.

GT: How would you describe Contraption Maker to someone who has never played The Incredible Machine?

Jeff: It’s a Rube Goldberg/chain reaction construction set. Use an assortment of objects like bowling balls, teeter totters, conveyor belts, and cats to solve extremely simple tasks in the most complicated way possible.

The game is split into two modes, puzzles and the maker lab. Puzzles give you a partially completed contraption and an assortment of parts, and it’s up to you to make it work in the correct way. In the maker lab, you have access to as many parts as you want with no size limitation to make your own puzzles, or just some random creations.

GT: It’s been 20 years since The Incredible Machine was released. What encouraged you to revive the series now?

Jeff: The Incredible Machine was always my favorite game that I ever worked on. Back in the day, it never sold as much as Sierra wanted, so we never really got a chance to improve on the game past one major upgrade. It’s also the game that I’m constantly asked if it will ever make a return.

GT: What are the biggest differences/improvements between The Incredible Machine and Contraption Maker?

Jon: Currently, the game has an entirely new physics engine, there is no size limitation on what you want to create, and we have Steam Workshop integration that lets people share their creations with everyone. The biggest upcoming feature is cooperative play. People will be able to join their friends and work on contraptions together.

GT: There are over 100 machine parts available in the game, some more obvious than others. Where did you get ideas for which items to include in the game?

Jeff: We start with big categories before moving to individual parts. We want parts that create energy and move it around in different ways. For example, we want a bunch of parts relating to fire, and we want them to create that fire in different ways. You can create fire through a pulling action, by having a ball hit something, etc. Once we pick a category that needs more parts, it’s just a matter of thinking of fun and creative ways to make that happen.

GT: What has been the most challenging part of developing Contraption Maker so far?

Jon: A big challenge is to make sure that the game runs deterministically. It is very important that your contraptions run the exact same time every time you play them. It’s also important that they run the same across different computers. With a floating point physics engine, this is more difficult to achieve, but Kevin has made a lot of changes to make sure it runs the way we want it.

GT: Interactions between objects and gravity are at the core of the game. What are your focuses as you develop the physics engine?

Jon: Our focus has been to make sure that the physics are real, but still make for fun puzzles. Sometimes, if something behaves exactly like it does in the real world, that doesn’t actually make for a fun piece to use in a contraption. So there is a balance between realism and functionality that we have to be mindful of.

GT: Because the physics are still under construction, there’s not many puzzles in the Alpha version of Contraption Maker. How many puzzles can we expect to see in the finished product?

Jon: We honestly don’t have an exact number, but there are going to be a lot. We know that there are a lot of players who just want to solve fun puzzles and don’t care about making things on their own. There will definitely be over 100 official puzzles.

GT: What kind of responses have you heard from Early Access players so far? What role does player feedback play in your development decisions?

Jeff: The response has been awesome so far. Players have been great at finding bugs, making suggestions, and creating some great contraptions for the workshop. Player feedback is helpful to decide what we add to the game next. Obviously we can’t take every suggestion the players make, but it helps to clarify the direction we already have set and make sure we are adding the right things.

GT: Contraption Maker isn’t officially released yet, and players have already uploaded over 200 puzzles to Steam Workshop. What influenced your decision to include Workshop support, and what role do you see the Workshop community playing going forward?

Jeff: Workshop Integration (or something like it) was a no brainer. This is the perfect type of game for sharing your creations around the world. Right now, players can only share puzzles and contraptions (creations with no goals), but we have plans to add more down the road.

Eventually, players will be able to share custom music, sound effects, background pieces, part skins, and more. It’s a very powerful system that will let the community add their own life into the game.

GT: According to your development blog, Alpha 2 should be available within a few weeks. What improvement can we expect from the new version?

Jon: Alpha 2 is going to be a fun one. Our update last week was really big, but it was mainly things like usability tweaks and bug fixes. This next update is going to come with new parts to play with, new background pieces, lots of new official puzzles, and a tool that will allow you to animate your backgrounds and bring them to life!