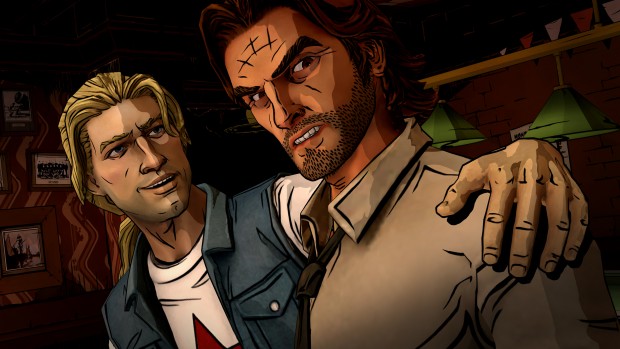 The revelation at the conclusion of episode one has Bigby Wolf reeling. Smoke & Mirrors opens with the player-controlled protagonist sitting in an interrogation room, filled with contempt for his holders and doubt for the interviewer’s claimed ability to empathize. Thanks to the interference of Ichabod Crane, he absconds scot-free, but the damage of the looming incident is done. It’s a distressing start to an episode that introduces more questions than it answers.

Episode two of The Wolf Among Us shows the beginnings of Bigby Wolf becoming unhinged. Whereas he seemed adept at keeping his cool in the season’s progenitor, his horrifying discovery that concluded it evidently left him with much less control over his temper. Initially, I was disappointed as a player with the inability to help him stay calm — a particular conversation with The Woodsman stands out in this regard. But I later appreciated the game’s insistence on depicting Bigby’s volatile, escalating mood. Said confrontation concludes with yet another head-spinning revelation, and the mysteries continue to mount throughout the episode.

The series is continuing its habit of introducing strong characters into the fray, with stirring appearances by the morally questionable Blackbeard and the smart-mouthed Georgie. Both offer up compelling conversation with subtle revelation, and are likely to appear again in future episodes. They also do a decent job at trying Bigby’s patience — and by proxy, the player’s — in what appears to be an emerging theme.

When compared to the previous episode, Smoke & Mirrors feels decidedly less interactive. There are few scenarios that give the player full control over Bigby Wolf, with the ability to walk around and examine objects. Instead, most of the time is spent either watching cutscenes or engaging in conversation — though, the two overlap rather often. While it’s difficult to say whether that aspect hurts or helps the experience, it’s a bit more clear that this episode struggles with finding an excuse to introduce any action sequences. One such scenario towards the end feels shoehorned, and rather inconsequential.

Perhaps most unfortunately, Telltale still hasn’t introduced the “Minimal” user interface option available in The Walking Dead. For time being, we’re still relegated to having our hands held with prompts once a character makes a statement of importance, effectively exposing the remainder of the conversation as negligible. Those of us hoping for this feature to be patched in will need to keep waiting.

Otherwise, the sister franchises appear to be diverging in appealing ways. They both share the same presentation and control scheme, but their encapsulating worlds and overarching moods are becoming increasingly different. The Walking Dead keeps its boots rooted on the ground (well, as far as a story about zombies is able), while The Wolf Among Us is ever more willing to dip into the supernatural, allowing for unique twists and turns that are difficult to see coming.

What Smoke & Mirrors loses in player control, it makes up for in intrigue. By the time the cliffhanger at the end is revealed, you’ll have waded through waves of emotions from the numerous epiphanies. The character of Bigby Wolf is progressively more fascinating, as is the enveloping plot. The wait between episodes is becoming more difficult to bear — our next journey into Fabletown can’t come soon enough.

Breanna has been gaming since infancy, if gnawing on an unattended controller counts as playing a game. One of the younger members of the Gaming Trend family, she dabbled in PC games as a kid but wasn't fully consumed by the hobby until the sixth generation of consoles. Now an avid PC and console gamer, she looks forward to the day when she can scape together enough cash to join the next gen club. In the last week of middle school, a math teacher taught her how to program a calculator; she was pretty much hooked then and there. Currently working towards a degree in Computer Science and Applied Math, Breanna hope to someday make games instead of just writing about them. Other hobbies include playing guitar, binge-watching Netflix, and cooking delicious food.
Related Articles: The Wolf Among Us
Share
Tweet
Share
Submit