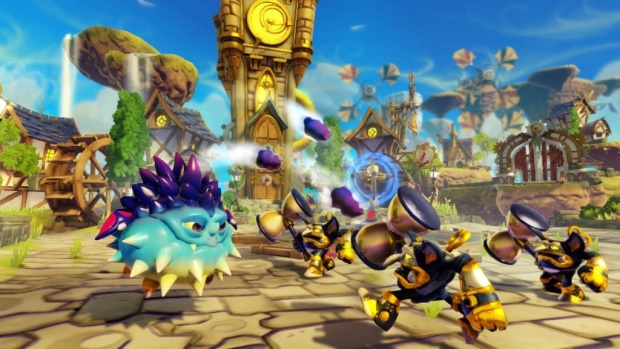 I don’t get a lot of mail. Well, maybe I do, but most of it is stuff I’d rather not get. But then, one  cold, dark Manitoban afternoon, I get a notice of a package being delivered. I didn’t order anything, and I certainly wasn’t expecting any new game reviews that week. Excited by the surprise, I find it’s from the folks at Activision and open it up to find not one, but two toy sets for me to try out – the Fiery Forge Battle Pack and Tower of Time Adventure Pack. Funny thing is, I was considering picking these bundles up a few weeks earlier simply to try out the non-character toys.

Now, there isn’t a lot to be said to explain the figurines themselves other than that they are plastic immovable toys that interact with the video game through a portal – basically put the object on your Skylanders Portal, and the near-field communication makes them appear in-game for you to use. The Skylanders SWAP Force line of toys are, in my experience, well crafted with fantastic detail. They’ve done a great job of making the characters obvious in what they represent, interesting to look at, and hardy enough to stand the up to the normal wear and tear of kids playing with them.

Fiery Forge Battle Pack
[singlepic id=17413 w=620 h=350 float=center]
The first set I’m going to discuss comes with two Skylanders playable characters: a “buzz”ooka-toting Bumble Blast and the Series 3 version of the land-shark Knockout Terrafin. Bumble Blast’s ranged attacks when upgraded are extremely powerful, but I found that I enjoyed the way he looks more than how he plays. Terrafin, who was also available in the previous Skylanders games, has now been outfitted with golden gloves that have claws on them. As he levels up he can spit out tiny land-sharks that will hunt down foes.

The Fiery Forge itself, a non-playable toy for the portal, can be called upon for a limited time (per level) to follow you around and pour burning pitch over your enemies. More than that though, by placing the statue on the portal it unlocks several battle arenas for you and your friends. It is usable both in the 3DS and console versions.

Tower of Time Adventure Pack
[singlepic id=17414 w=620 h=350 float=center]
The second set contains four toys, one of which is a playable Skylanders character – Pop Thorn, a porcupine-like creature who alternates from being a smallish animal to a puffed up ball. His main attacks are launching quills, slamming the ground, and blasting air forwards as he deflates. While he comes across as cute, leveling him up affords him significant damage, though he doesn’t move all that quick.

You also receive the Tower of Time – a toy that simply unlocks a special level where you attempt to free a realm from a maniacal chicken in a robotic suit of armor. Named appropriately, the puzzles all revolve around briefly stopping the flow of time to progress, and while most were simple there were a few that I found to be challenging due to advanced platforming. The levels aren’t all that long, and once you’ve put the tower on the portal a single time it is unlocked indefinitely. This means that if you ever visit a friend and place the Tower of Time on their portal, it will remain unlocked for them.

The other two included toys, Battle Hammer and Sky Diamond, are similar to the Fiery Forge piece as they are not playable Skylanders per se, but instead can be used to activate their powers for a limited time per level. If you find yourself in a pinch with some tough enemies you can add the Battle Hammer to your connected portal and it will help you lay the smack down.

The Sky Diamond, on the other hand, boosts dropped money from enemies as you hit them – it spits out diamonds worth 50 gold for each hit on an enemy. Skylanders that are quick to hit multiple targets can really rake in some serious dough. Of course, the requirement is that you need enemies to hit, so in normal gameplay it can be awkward. There is, however, a simple exploit that can give you a boost advantage.

Sky Diamond Exploit
In short, you can use the Sky Diamond in conjunction with the training dummies in the main town to max out your Skylanders skills and by making money FAST. The dummies normally drop coins when hit (a pittance, really), but with the Sky Diamond in play it’s a whole other ballgame. In a single use, you can earn anywhere from 2500-4000 gold in less than a minute. Quitting and re-entering the town will allow you to keep your money, but reset the Sky Diamond power to be used again. No running around, no additional loading screens or platforming, and no puzzle solving. Simply beat up training dummies with the Sky Diamond active and scoop up the diamonds. Hit as many dummies as you can at a time – this works best as two-player since the gold is shared to each, and the extra hits are gravy.

While this could be considered game-breaking, it doesn’t speed up the stats leveling of the Skylanders themselves and currency only unlocks their different attacks. To level both yourself (as Portal Master) and your Skylanders will require you to take on real challenges in-game, which is why I don’t think this is as big a deal as may seem. In fact, there is real value in this – older kids who discover it may well enjoy being able to equip new Skylanders without having to grind away for hours upon hours just to afford the combat skills.

For the console and 3DS versions, both of these sets are worthwhile – if you find yourself standing at the store trying to decide which one to pick up, go with the Tower of Time Adventure Pack – that’s money in the bank, and offers all the excitement of the other but includes a handy shortcut to unlock most of the special attacks without breaking the natural character leveling. Additionall, the gold collected in the 3DS version of SWAP FORCE converts to experience at the end of each level, so if you’re about to climb into a battle with a ton of enemies, you’ll want your combat enhancement at the ready and the Sky Diamond in play while you knock Kaos’s forces silly.

Born and raised in Winnipeg, Canada, at a young age I was forced to decide whether the harsh northern winters were going to claim my fingers, or to turn to the safer pursuits of indoor activities. Little did I know that a little game called Ninja Gaiden would bring my digits more pain than frostbite ever could. Starting with Vectrex and C64 games and moving forward through the era of electronic entertainment, I sampled as much as I could in the different platforms, and began my interest in PC gaming from wrestling with DOS memory management. While console games were a part of my earliest gaming memories and I certainly had played on most platforms including 3D0, all things Nintendo, PS1 and the like, truly the PC was my domain until the Xbox. As an old PC gamer, I ever chased the cutting edge technology. Eye of the beholder with CGA 4 colors was my first step down the the path of blowing thousands of dollars on PC upgrades over two decades. Ultima 7, with the Guardian talking to me through my monitor, still haunts my dreams and keeps me ever hoping for a decent Ultima 8 and 9. From the 3DFX SLI VooDoo2s and Aureal to today's GPU driven DirectX games, the new and shiny pictures seem to keep me going. My PC gaming has slowed down with the market shift though, and although I have choice games that will ever be on PC, I have found myself in console gaming with a bit of portable gaming in my life. Back around the turn of the millenium (and long before fatherhood), I had fired off an email offering to help Ron with a little-known site called ConsoleGold. Little did I know it would be be a part of my life to this day. While I've seen my fair share of shovelware (thanks Ron!), I manage to try and find the fun in most games. Leaning towards sandbox and action titles, I've grown to love games for their potential to reach art. Console agnostic and excited for the progress of tomorrow, I fancy the latest and greatest, but still enjoy the good old classics ... as long as they've been revamped from their 8bit graphic roots.
Related Articles: Skylanders SWAP Force
Share
Tweet
Share
Submit