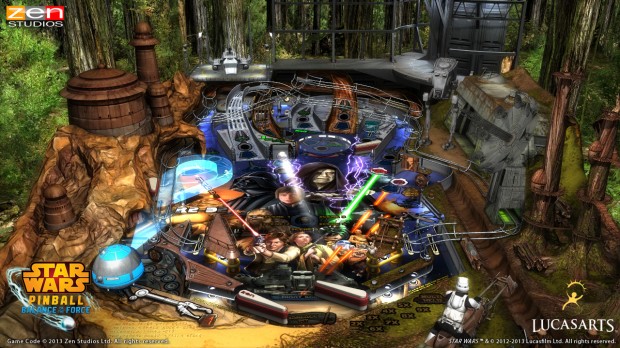 We here at Gaming Trend really like Star Wars Pinball (as long as it’s not the 3DS version). If you’ve also been enjoying doing your part in deciding the Balance of the Force, you’ll be happy to know that Zen Studios has offered up three new tables to add to the bunch. I recently sat down to see if they scratch the itch as effectively, this time on the PC version of Pinball FX 2 available through Steam.

The Star Wars Pinball flavors of the moment are Return of the Jedi, Darth Vader, and Starfighter Assault. Let’s dig in:

Getting the weakest link out of the way, the Return of the Jedi table does the least to thrill. The landscape is an attractive one with an Endor flavor, but the gameplay doesn’t fare as well. There are some nice missions — the speeder bike sequence is particularly cool — but too much of the experience seems to rely on luck. More so than any of the other Star Wars Pinball tables to date, the flow of the Return of the Jedi table tends to lead the ball into the dreaded outlanes a bit too often.

Then there’s the Darth Vader table. It may be the most bland from a visual perspective (there’s a whole lot of red), but if you’re looking for a high-scoring affair to stroke your ego, look no further. Multiball sequences are fairly easy to achieve, and simply sending the ball careening wherever it may go will typically do enough to rocket your score soaring into the millions. The missions are tough, but also not as necessary for a high point total as they are in the other tables. From a classic pinball perspective, this may be the strongest table of the bunch.

For my money, though, The Starfighter Assault table takes the cake. It’s easily the most visually stimulating and even includes an elaborate intro sequence. You have the choice of fighting for either the Rebel Alliance or the Imperials — functionally, not much differs, but the presentation changes with varying voice-overs and ships accenting the gameplay. The missions are quite involved, including one that sends you out of the table and into a Space Invaders lookalike in its initial phase. It may not be the pure pinball experience that is the Darth Vader table, but the bells and whistles go a long way to help Starfighter Assault stand out from the pack.

If you’re enjoying the initial Star Wars Pinball tables, you’re certain to find something to like in this new package. As much as the Return of the Jedi table may pale in comparison to the others, it’s still a genuine pinball experience, and the other two in the pack rival any Zen Studios tables to date. If pinball is your game, there’s no reason to hesitate on this new offering.

I’ve now played Star Wars Pinball on the Nintendo 3DS, the PlayStation Vita, and with this sampling, the PC. While playing on the PC looks fantastic on the big screen, my experience with the PlayStation Vita version has still been the most enjoyable. Zen Studios has a wonderful pick-up-and-play item here, and the high-resolution Vita screen means you don’t miss a beat. However, as usual, avoid the Nintendo 3DS version like the plague.

Matt has a love for video games that has existed since he could comfortably grasp a joystick and play Combat on the family Atari 2600. While fond memories of SNES and shareware PC games still dance in his head, he is dedicated to enjoying as much of modern gaming as possible on all platforms. Matt has served as a game critic for several publications since 2009. When not playing games and writing reviews, Matt is an Ethernet network engineer for an international bandwidth provider. He is a musician through schooling, as well as a recording engineer, and he remains active composing and recording music. Matt also is a Crossfitter and an avid fan of MMA and hockey (go Flyers!).
Related Articles: Star Wars Pinball, Zen Pinball 2
Share
Tweet
Share
Submit